The unrecognized role of Captain Speakeman

The Lady Adriana – Seductress of Slannesh

War has waged across the Corvus Cluster for six years now, and an assortment of heroes—and villains—have emerged. I thought it would be useful to put together a “Who’s Who” of our small corner of the galaxy.

I’ve attempted to include all individuals who’ve been active since our narrative campaign began on 3 001 735.M41, and I have included a number of individuals who are only casually mentioned in passing. Everyone is organized alphabetically, albeit under various factions within the Sector.

As possible, I have included links to more detailed biographies—or at least to their first reference in the various “historical documents.”—TheGM

Alpha 239-A, Skitarii alpha—Full designation: Alpha Tiberius Xalox 239-A. Commander of the 3rd Decimam of the 117th Subcohort of the 11th Skitarii Cohort, most recently fighting on the moon of Hegira. (Skitarii clash with Blood Wolves on Hegira)

Kazzim-Aleph-1, dominus—Commander of the 4th Cohort of the Charcharoth Home Guard on the desert world of Morkai. (Mutants continue advance on Morkai)

Auxilliarus Artemis 5.8, magos—Ranking official of the Adeptus Mechanicus government on the twilight world of Volano. (Rumors of the Underhive – 3 680 740.M41)

Axiarch XR-71, datasmith, Morkai—Responsible for two ancient and most revered Kastelan Robots that serve the Mechanicus on the desert world of Morkai. (Mutants drive Imperial troops from Nisa Ruins)

Caldarius A-87, transmechanic—A member of the Mechanicus who serves as translator/public affairs officer for Dominus Kassim-Aleph-1 when dealing with Imperial authorities. (Home Guard defeats mutants on Morkai)

Paladius Xi-7, enginseer—Led team of servitors on a flanking attack that helped defeat a mutant army on Morkai. (Mutant horde repulsed on Morkai)

Protious-58, Skitarii ranger—Serves in 3rd Decimam of the 117th Subcohort of the 11th Skitarii Cohort, most recently fighting on the moon of Hegira. Killed by traitor Astartes in Susa City.  (Skitarii clash with Blood Wolves on Hegira)

Quendix-9a, Skitarii ranger—Serves in 3rd Decimam of the 117th Subcohort of the 11th Skitarii Cohort, most recently fighting on the moon of Hegira. Killed by traitor Astartes in Susa City.  (Skitarii clash with Blood Wolves on Hegira)

Kolus-Theta-44, Skitarii ranger—Serves in 3rd Decimam of the 117th Subcohort of the 11th Skitarii Cohort, most recently fighting on the moon of Hegira. (Skitarii clash with Blood Wolves on Hegira) 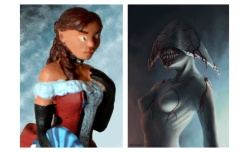 Ghaz Tak, traitor Astartes—Aspiring Champion of the Death Guard who was believed killed in a skirmish with Space Wolves, Reports of his death were premature, and he later led a Death Guard force in an invasion of the Lorca Valley on Dozaria. (Space Wolves defeat Death Guard on Dozaria)

Lady Adriana, daemon of Slannesh—The beautiful and deadly consort of Count Johaan Feracci keeps a deadly secret, one that one day will shake the foundations of Imperial rule in the Corvus Cluster. (The Lady Adriana: Seductress of Slannesh)

Vardis Forbin—Proprietor of the House of Subtle Delights, a house of pleasure on Belliose III that is infamous for its debauchery. Forbin led the cult whose heretical spell casting helped Adriana cross over to Real Space, and he introduced Adriana to Count Johaan Feracci. (The Fall of Feracci)

Voloh Gudag—Responsible for the Kassig Plague and the destruction of an entire company of Space Marines, Gudag is the ultimate villain of the Corvus Cluster. He has been condemned by Imperial authorities as Excommunicate Traitoris. (Chaos Warlock Voloh Gudag)

Maldrek the Wolfbane—A traitor Astartes and sorcerer of the Night Lords, Maldrek is responsible for multiple attacks and atrocities against the loyalist Space Wolves Chapter. (Inquisition learns of the Night Lords’ activities)

Necrosius—A sorcerer of the Death Guard who sought to conquer the world of Dozaria with a heretical ritual. (Knights of Altair stop ‘Ritual of Pestilence’)

Odacius—A Helbrute of the Death Guard. Odacius was an ambitious upstart whom the Chaos Lord Ghaz Tak drove mad by imprisoning him in a dreadnought designed to torture him. (Death Guard targets Dozarian crops)

Thurservor—A Chaos lord of the traitorous Night Lords, Thurservor is largely responsible for the growing Chaos threat in the Burning Frontier. (Inquisition learns of the Night Lords’ activities)

Mallous Vándr—A pack leader of the Blood Wolves, a warband of traitors that broke off from the noble Space Wolves Space Marine chapter. (Blood Wolves and Death Guard clash in space)

Cardinal Esau Gurney of Brimlock—A speech by his Eminence helped instigate an Imperial attack on the Tau that ultimately became known as the Damocles Gulf Crusade. (Cardinal calls for crusade against Tau)

Coonel Piet Konev, commander 1st Battalion, Household Guard of House Fenring—First appears in Corvus Cluster records in an action against a mutant force on the world of Morkai. (Mutant horde repulsed on Morkai)

Hamed Amari, merchant prince—Hailing from the world of Tallarn, this interstellar merchant fell victim to the xeno taint of a genestealer. He was killed on the world of Cryillias by order of the Inquisition. (Infection on Outpost Zero-Omega)

Lecia Athena, Tau sympathizer—Athena is accused of treason and heresy for her active support of the Tau invasion of Dar Sai. (Dar Sai officials hunt traitor known as Lecia Athena)

Lukas Barat , baron, Dar Sai—Plantation aristocrat and owner of the Barat Shipping Consortium, Barat was caught smuggling stolen food from the besieged city of Aruna. He was publicly executed as an example against black marketeering. (Civilians suffer as Tau advance on Port Aruna)

Belladonna, bounty hunter—A noblewoman of an assassin’s guild on Necromunda, Belladonna came to the Corvus Cluster to seek clues into the murder of her husband—and to fund her family as they fight a hive gave war back home. (Bounty hunters seek unsanctioned psykers)

Tambor Childs, overseer of menial labor—A minor functionary of the Adeptus Mechanicus, he is presumed dead after a genestealer infestation on Cryillias. (Infection on Outpost Zero-Omega)

Kaveah Halok—Psyker and criminal on the world of Brimlock. Seeking revenge for his treatment as a psyker, Halok committed a series of terrorist acts—until bounty hunter Jason Scarn captured him and turned him over to the Adeputus Arbites. (Names in the News—3 123 741.M41)

Petrov Konrad, high mayor, Dar Sai—After a decade administrator the important port city of Aruna, Konrad was forced to flee the city along with thousands of refugees. (High Mayor of Aruna escapes Tau)

Iago Mephistopholes, industrialist—A pompous and self-interested industrialist on Hegira who criticized the destruction of his holdings in ork-held territory. (Imperial Navy bombards ork positions on Hegira)

Sophia Piers, farmer—Known as Ma Sophia, Piers owned a moisture-collection farm on the Chunik Plateau of the desert world of Morkai. She was forced to abandon her farmstead after an attack by mutants. (Mutants attack Ma Sophia’s farm)

Ionut Barbu, colonel, 8th Xandarian Regiment—Commander of a battered but well-respected regiment defending a trench line outside the city of Mygor, on the world of Dozaria. (Heroism and misery in the Mytor trenches)

Malor Brynsyka, corporal, 728th Cadian Regiment—Known only for a quote: “They may not be major battles, but any time you face one of those greenskin brutes up close, it’s the fight of your life.” (Patrols report skirmishes south of Barad Mine)

Fulton Carobius, major, 728th Cadian Regiment—Commanded a reinforced company of troops against ork forces in the Rakora Sand Dune Region, southwest of the Barad Mine. (Patrols report skirmishes south of Barad Mine)

Catillo and Haddaway, privates, 728th Cadian Regiment—Two sad sack guardsmen who have earned the enmity of Pvt. Tyesha Levers for running away during the fall of Malati. (Two soldiers reflect on defeat – Battle of the White Tower)

Anton Delmara, lieutenant, 728th Cadian Regiment. His hastily organized defense of the town of Saalon held for three days, fatally delaying the Tau advance on the port city of Malati on the moon of Dar Sai. (Dar Sai: Tau march on Malati)

Adrius Evander, commissar-lieutenant, 728th Regiment. Accompanied patrol that explored Warp phenomenon south of Hegira’s Barad Mine. Executed for Warp taint, he was recommended for a posthumous commendation. (Warp phenomenon reported at Barad Mine)

Felix Galla, lieutenant, 728th Cadian Regimen—A newly commissioned officer, fighting on the outskirts of Port Aruna on Dar Sai, who went to the Emperor’s side in the first minutes of his first command. He was killed by a battle cannon that, blown 60 meters into the air, was rude enough to land atop the young officer. (Tau crack Port Aruna’s defenses on Dar Sai) 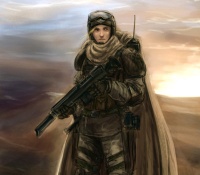 Tyesha Levers, private, 728th Cadian Regiment—Her private journal’s description of the fall of Malati became one of the most important historical records of the war on Dar Sai. (Surviving Port Malati: Journal of Pvt. Levers)

Emil Lungu, commissar, 8th Xandarian Regiment—Responsile for the discipline of troops under the challenging conditions of trench warware on the world of Dozaria. (Heroism and misery in the Mytor trenches)

Bryson Malor, corporal, 728th Cadian Regiment—Commanded an observation team in Susa City. Only Malor and one wounded comrade survived an attack by orks. (Too many orks, not enough men) 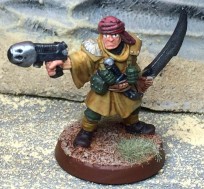 Col. Fakhri Pasha is commander of the 2nd Tallarn Regiment and is respected for leading his troops from the front line. He has perfected the highly mobile tactics that have made the regiment an elite unit.

Usiel Pask, major, 728th Cadian Regiment—Tank commander and great-great-grandfather of the renown Knight Commander Pask who would command Imperial armor in the last century of M41. (Orks stopped again at Barad Mine)

Stevrous Stark, captain, 728th Cadian Regiment—Known as the Hero of Dar Sai, this young captain won renown for his military successes against the Tau invasion. He eventually found himself in command of all military forces on the beleaguered moon. (Battle of the Manufactorum)

Paulo Stovall, major, 728th Cadian Regiment—The death of this officer was reported in a final voxcast from the Barad Mine, just minutes before the final defenses were overrun by an ork horde. (Panic spreads with fall of Barad Mine to orks)

Pernium Thule, lieutenant, 132nd Cadian Regiment—Seeking to determine the fate of a long-silent Mechanicus outpost, this officer was betrayed by a Tech Priest but escaped. He was later executed by the Inquisition as part of a cover-up of the mission, but he was awarded the Sontaran Cross posthumously. (Incident on Petronius IV)

Delmara Stryker, captain, 728th Cadian Regiment—After his superior was injured by enemy fire, this officer took command of the Malati defenses during the second Tau attack. Stryker was summarily executed by the regimental commissar for his failure to hold the city. (Malati falls to Tau attack)

You’ve completed Page 1 of Who’s Who. Click here to go to:

Page 2 of Who’s Who (Imperial Navy to Mutants)

Page 3 of Who’s Who (Necrons to Vorpal Swords)