The first time Sgt. Matius Grentanus caught sight of a primitive, blue-colored ork, wielding a stone axe of all things, was when his unit was fighting near the Barad Mine more than a year ago. “It was the damnest thing,” he recalls. “Amidst the greenskins, firing crazily with […]

We have a fair bit of terrain to hide behind and some nice buildings and industrial pieces. However, neither TheGM nor I have gotten around to building an Aegis Line. It’s pretty unsatisfying to have a nice table set up and then have to look at a bunch […]

Battle raged around him.  (Knights of Altair flee the Barad Mines.)  With a hearty laugh, Rumlar burst from his battlewagon, leading his boyz through the ruins to strike at the Knights.  As he leaped over the wall to the floor of the ancient hall, Rumlar roared, urging his […]

Knights of Altair driven from Barad Mine (Part 3)

SICKENING REALIZATION Standing outside his burning Rhino, Brother-Sergeant Gulterus took a moment to assess the tactical situation. He didn’t like what he saw. The battlefield was strewn with burning Rhinos and Predators, and all he could see as he looked south was a sea of green marching north. […]

We’ve had this kit for quite a while. Now that the projects that were left hanging are done, it’s time to get this puppy built and up. This should be a fun little project. I’ll post a pic of the other materials a little later.   The Corvus […]

TheGaffer has been in hiatus since the fall. Still working on terrain and playing games here and there. However, bagpiping, finishing my game room, and of course work (which makes the other three possible) has taken up more time than posting on the blog. Hopefully that will change […]

We made the deadline for the first piece. This is our next project. The deadline will be Sunday, November 5; two weekends and the days in between with a few more since we’re posting this two days early. Hopefully we’ll get someone else from the club to join […]

Is a Stompa marching on the Tarak Mines?

IMPERIAL VOXCAST (3 042 757.M41)—A giant xeno totem has been spotted in the desert south of the Tarak Mines, report Imperial soldiers deployed to defend the immense mining complex. Initially dismissed as rumors by Imperial High Command, Col. August Klein yesterday confirmed that there have been sightings of […] 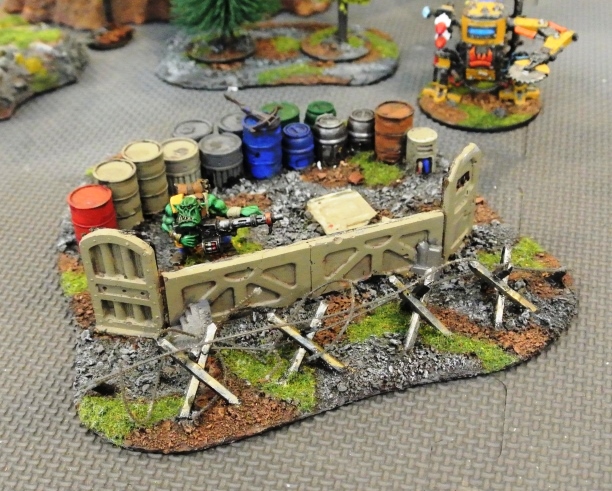 In between painting figures, we’re building up our collection of 40k terrain. We want something modular that could be an orky mektown, mining area, or a stronghold depending on how the pieces are arranged. The WH40k rule book mentions several pieces of ‘battlefield debris,’ one of which is a […]