Ghaz Tak and a retinue of Plague Marines charge a Tallarn platoon in the forests of the Lorca Basin.

The Chaos warlord known as Ghaz Tak currently is leading a host of Death Guard traitors, cultists, and other heretical forces on the war-torn world of Dozaria.

Few have survived encounters with this heretic and traitor, but Ghaz Tak has made a name for himself by participating in a number of Death Guard atrocities over the millennia. Although not among the most powerful leaders of the Death Guard, his most recent atrocities have gained him much favor from his patron Chaos god, Nurgle, and led to his advancement from Aspiring Champion to Chaos Lord.

The traitor is described as two meters tall, with a diseased, bloated belly that has cracked open the abdomen section of his Terminator armor. He wields a two-handed grinder axe (a huge axe with razor-sharp rotary blades mounted in the axe blade).

Ghaz Tak, along with all members of the Death Guard, are declared Excummunicate Traitoris—and are to be killed on sight. So far, however, the traitor Astartes has managed to elude all attempts to end his heresy.

Notable events in the traitor’s life:

Early Life (872.M30—Born on the polluted world of Barbarus, Ghaz Tak joined the Death Guard during the Great Crusade and served with distinction for more than a century as a loyal servant of the God-Emperor.

Destruction of Barbarus (014.M31)—Ghaz Tak did not take part in the Siege of Terra, and he had yet to fall to the lure of Chaos when the Dark Angles Legion appeared over Barbarus and, in vengeance over the Death Guard’s treason during the Horus Heresy, bombarded the planet with Cyclonic Torpedoes.

Escaping the Exterminatus, Ghaz Tak rejoins his legion as it flees into the Eye of Terror after the fall of Horus.

Blessing of Nurgle (M32-34)—For two centuries, Ghaz Tak participates in a brutal war against other Traitor Legions to help his Primarch Mortarion carve out an empire in the Eye of Terror. At first, the strong-willed Astartes resists the temptation to worship Nurgle, but, in time, he sells his soul to the Chaos god.

Desecration on Destinos (493.M34)—Ghaz Tak participates in a raid to the Shrine World of Destinos. After slaughtering the priests of one Imperial cathedral, he breaks the ancient seal on a saint’s tomb and desecrates its remains by throwing the desiccated corpse into a nearby sewer. 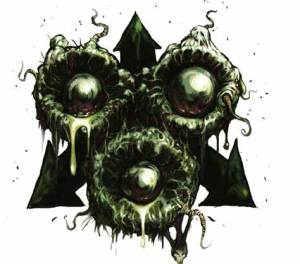 Infection of Rotzen (182.M37)—Seeking to gain Nurgle’s favor, Ghaz Tak organizes a small warband and leads it on a mission to the hive world of Rotzen. Arriving by stealth, he and his followers seed the planet with various plagues. Statues weep tears of filth, and reservoirs of water are tainted with diseased slime. Millions die without a boltgun being fired.

Showing his true cunning, Ghaz Tak makes no attempt to engage Imperial authorities. Once he has planted his infections, he leaves the planet to confront a virulent pandemic and growing civil unrest. To this day,occasional outbreaks of disease owe their origins to Ghaz Tek’s visit.

War of Plagues (547-693.M41)—Through long service to Nurgle, Ghaz Tak can rightly claim to be an Aspiring Champion of his diseased patron. Now leading a warband of 20 Plague Marines and 500 cultists, he takes part in the invasion of Croxis Prime.

This industrial planet, which provides resources for the Forge World of Helios, finds itself beset by elements of the Weeping Legion, a warband that’s part of the 5th Plague Company of the Death Guard. Plague Marines smear the planet’s factorums with sanguous flux that corrupts the planet’s Machine Spirits.

Despite the sabotage and contamination, the Mechancius fights on, and the war descends into a grinding standoff. Onagers battle against Daemon Engines, and Skitarii slaughter mindless Poxwalkers, and visa versa. The war goes on and on.

Ghaz Tak leaves the war in 693.M41 for new challenges. The war continues for another 30 years until the Ordo Hereticus orders Exterminatus of the hopelessly corrupted world.

Heresy on Hedera (737.M41)—Ghaz Tak joins forces with the infamous Chaos Sorcerer Voloh Gudag. Gudag has established a Chaos cult on the planet, and Ghaz Tak guides them into the arms of Nurgle.

The Chaos sorcerer, Nocrosius, has joined with Ghaz Tak on a campaign to destroy Imperial rule on Dozaria.

Encouraging them to conduct a heretical ceremony, Ghaz Tak watches with glee as the cultists open a rift into the Warp. Soon, Daemons and Nurglings are cavorting on the streets of the dead and dying. (Plague sorcerer returns to Corvus Cluster)

Invasion of Dozaria (738,M41)—Now leading a warband of 100 Plague Marines and 2,000 cultists, Ghaz Tak lands his forces outside the PDF military base in the Lorca Basin. Already infected with airborne-spread plagues, the PDF are quickly dispatched, and Ghaz Tak begins an advance across the planet’s surface that is marked by unspeakable horror, violence, and atrocities. (History of Dozaria Campaign -Part 2)

Ritual of Pestilence (6 853 739,M41)—Having made a miraculous resurrection from his fatal wounds, Ghaz Tak uses the obvious patronage of Nurgle to form an alliance with a plague sorcerer named Necrocius. They plan a ritual that will open a portal into the Warp and allow Nurgle daemons to cross over to Dozaria and assist the Death Guard invasion.

A strike force led by Captain Alaric Galba of the 3rd Company of the Knights of Altair Space Marine Chapter successfully interrupts the heretical ceremony and saves the planet from utter destruction. Both Ghaz Tak and Necrrcious are thought killed in a massive explosion, but the favored of Nurgle are not so easily dispatched. (Knights of Altair stop ‘Ritual of Pestilence’)

Advance on Antiem ( Late 740.M41)—Ghaz Tak marches west across the Lorca Basin with the goal of destroying the food supply of Imperial forces near the town of Antiem. Supported by Necrocious, and warriors of the Tainted Souls Cult, he seeks to contaminate as much cropland as he can and shift the balance of power on Dozaria. (Tainted Souls cult torments plague-suffering Dozaria)

The Corvus Cluster is a Warhammer 40K blog documenting our gaming adventures in the fantastical sci-fi universe of Games workshop.

Tagged as: People of Interest