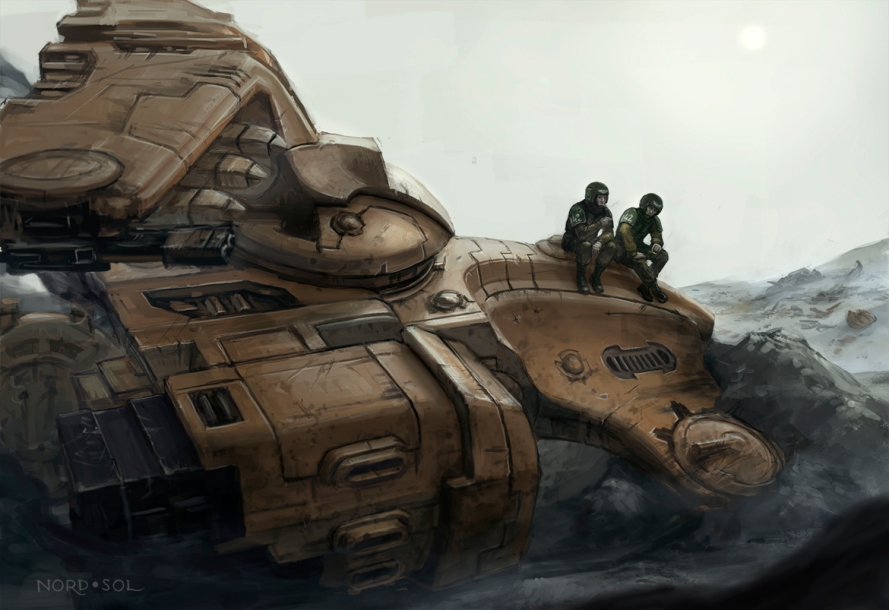 Corporal Catillo lit up a lho-stick and inhaled deeply. “Ah, a good day.”

His companion, Private Haddaway, snarled. “What’s so good about it. We lost the battle.”

Catillo reached down and tapped the gold metal of the Tau vehicle below him. “We’re still breathing, kid, which is more than can be said for the poor sods who were in this thing.”

Both men were sitting on the forward hull of a Sky Ray, the Imperial code name for the xenos’ missile-launching  tank. Two hours ago, the Tau vehicle had been skimming across the battlefield, sending projectiles of death into the Imperial Guard lines. Only a lucky hit from a lascannon had finally put the tank out of action.

“Well, okay, it is good to be kicking,” Haddaway admitted, reaching over and pulling the lho-stick from Catillo’s lips. He took a drag. “But I would have bet a week’s pay we had this battle won.”

It had looked that way at first, Catillo admitted. As part of the 728th Regiment, under the command of Captain Stevrous Stark, they had advanced up the Hanui Valley. Their target: a xeno structure–slender and bright white–rising above the jungle canopy.

The company had advanced into a firestorm of pulse rifle volleys. An early advance by the xenos on the right flank had been thrown back, but a team of Crisis Suits–one of the Tau’s more unique weapon systems–had soared out of the woods to play havoc with the Imperial line.

They even managed to immobilize the company’s single Lemon Russ tank, but it had its revenge: A shell of the tank’s massive Battle Cannon had struck the Tau commander–boldly out front in a bright white armored suit–and the xeno had disintegrated in a massive explosion that left no trace of him afterwards.

Catillo took back his lho-stick and took a drag. “Yeah, I thought we had the upper hand, too,” he said. “Then some more of those damned Crisis Suits jumped behind our lines and busted through our center.”

That was when the battle had ended. With the Imperial center broken, Captain Stark had withdrawn a few hundred yards to consolidate his lines. The xenos had broken off the attack. With casualties high, neither side was eager to resume the fight, and it was clear the Imperial advance had stalled. Word was that the company would pull back to base and regroup. The field of battle would belong to the xenos, who thankfully appeared willing to let the 728th withdraw unhindered.

“Those suits aren’t tanks, though,” Catillo observed. “If you can put enough lasgun fire on them, they start to go down.”

A harsh voice–reminiscent of a tank engine–broke up their reverie. “You two think we’re on vacation?”

Below them, Sgt. Majaro stood, hands on hips. “Get your butts down here,” he growled. “We’ve got orders to load up the wounded and withdraw.”

With a last drag, Catillo tossed his lho-stick to the ground and slid down off the xeno tank. “Right behind you, Sarge.”

TheGM: This quiet moment of reflection occurred on the afternoon of the Dar Sai: Battle of the White Tower, which was fought  in Dar Sai’s Hanui Valley on 6 042 735.M41.

Artwork, titled “Smoking After,” courtesy of Nord-Sol at DeviantArt (http://nord-sol.deviantart.com/gallery/).