In between painting figures, we’re building up our collection of 40k terrain. We want something modular that could be an orky mektown, mining area, or a stronghold depending on how the pieces are arranged. The WH40k rule book mentions several pieces of ‘battlefield debris,’ one of which is a fuel dump or depot. We figure that’s something that can be made of bits lying around the garage and in the hobby bits boxes. After searching around we’ve amassed a pile of scrap that would make a Death Skull proud. 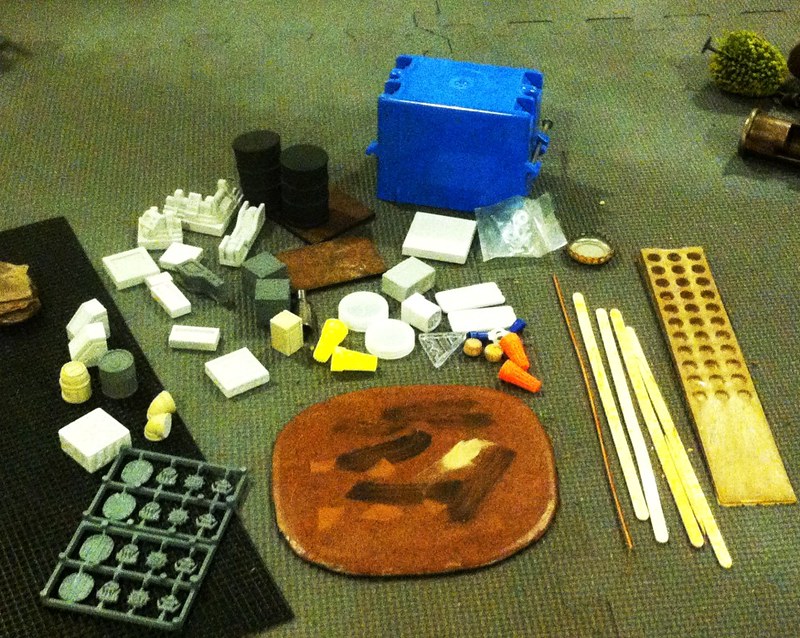 Somehow all of this will look like a fueling station when we are done.

The control structure is on pause. In the meantime we’ve worked on the fuel reserve pile and have gathered some panels and various containers to make the fuel area.

A barricade on one side and the fuel cells on the other. We’ll add barb wire later.

In trolling around the net, we’ve found some good pieces for inspiration. Ironhandz has some really cool terrain pieces. Iron Hands Studios

Our new game table is coming along. For a look at our game table projects have a look here: Corvus Cluster Terrain.

We’ve picked up the project a little more today. Trying to come up with a color scheme. The board will be gray so we want to use a different base color and rust isn’t really the look we want as it will limit the flexibility for other uses. So going through our existing buildings, the GM and I both have bunkers from Miniature Building Authority. It’s a nice beige that is brighter than the gray game table but still neutral so it is very flexible. It also happens to be close to Vallejo WW2 German Beige for the base color and Army Painter Skeleton Bone as a highlight.

So with that color as a guide we finished the basic fuel depot piece. Eventually we’ll add some orky glyphs to the front but in the mean time we have a nice generic piece we can use for different periods and rules.

The red ones burn fasta!