The first desert terrain to be completed—and, hopefully, the first useful obstacle against The Gaffer’s mechanized ork force.

I finally have finished a pair of tank traps to serve on the battlefields of the desert worlds of the Corvus Cluster.

I first referenced my efforts on this terrain project in an earlier rant, “A story of frustration: Making desert terrain.” In that blog, I complained that I was having difficulty coming up with a proper paint scheme to represent a desert landscape.

After weeks of trail-and-error experimentation, I finally found a combination of colors that, with a few washes between layers, seemed to work. Once that was done, I was ready to finish the tank traps . . . and get serious about another bunch of desert pieces.

As this was an experiment, only two tank trap pieces were made. I’m glad. As you’ll read in the article, I’ve already decided to move away from the large rectangular bases. Note the tank tread indentations in the foreground of one base (not happy about the obvious lack of sand circling the tread marks, though).

But, this little account is about the tank traps.

As you can see from the photos, they’re hardly complicated. I cut out two pieces of MDF board then used a rasp to slope the board edges.

You can see how the insulation foam was cut to shape and distressed before it was glued to the MDF base.

The actual tank traps are simply insulation board cut into one-inch-by-one-inch squares. I then sloped the edges to create pyramid-like shapes with large tops.

Terrain 101, right? The only real creativity was distressing the tank traps with shell holes and gouges to present battle damage.

These were glued down to the MDF board, sand was applied around them, and a simple (there’s that word again) paint job applied. The only bit of whimsy involved applying a bit of paint chalking in one corner and pressing the tread of a tank into the chalking to create a tread impression in the “dirt.”

I also added tiny bit of flocking and SceneScapes tufts of dried grass.

If I make more tank traps, I think I’ll make some changes. For flexibility—and to downplay the boxy look of my original bases—I’ll cut my MDF board more alike these photos I found online.

I prefer the smaller “footprint” of these commercial products: Gothic Tank Traps from Flames of War (left), and Resin Dragon’s Teeth from Dragon & Serpent Gaming (right). 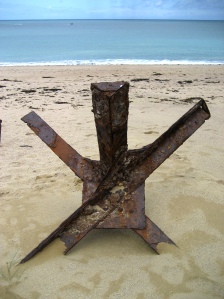 These designs are superior, I think, as the bases are less prominent to the eye and put more attention on the traps—sometimes called “dragon’s teeth.”

Alas, I didn’t think of any of this until after I’d put down the sand, which made gluing down extra details a bit more challenging. So, I figure I’ll upgrade my tank traps down the road.

Another change for the future: While the SceneScapes tufts worked well, as they add a three-dimentional look to the bare desert landscape, gluing down flocking was a mistake. It’s a bit too flat and looks more like a stain than grass. I could have used a grass applicator, but given the flatness of the terrain, I think the taller SceneScapes tufts are the way to go.

For now, though, I’ve finally finished some desert terrain, which is some progress. That’s good news for the Imperial forces on Hegira—anything that might slow down The Gaffer’s ork vehicles is welcome.

Hopefully, a lot more terrain articles—with a little more detail to them—will be coming along soon.