From the top of a nearby hill, Private Tyesha Levers watches over Baker Company as it sets up operations.

“The Kroot are a nasty bit of business. All xenos are a blight, but I hate those avian bastards almost as much as I hate orks.

The Tau aren’t so bad. I kill them without a second thought, but they’re at least civilized. They don’t kill or torture prisoners, and we occasionally make an informal truce to collect our wounded. (Not that we share that fact with the commissars.)

But the Kroot are monsters. I still remember seeing them at the Battle of Malati, feasting on corpses .  . . and sometimes on the living.”—Private Journal, Pvt. Tyesha Levers, Baker Co., 728th Cadian Regiment.

(The following is Pvt. Levers’ personal account of the battle report, which takes place sometime after “Tau army advances south on Dar Sai.” 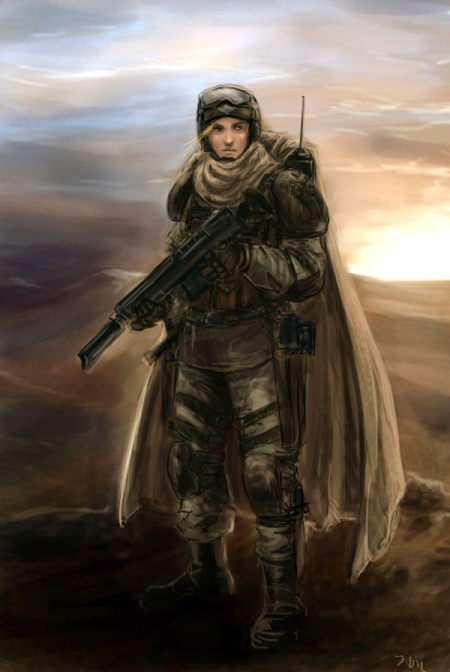 The crosshairs of my sniper rifle were centered between the eyes of Corporal Catillo, who was sitting on a cargo box with a lho-stick between his lips. As was typical of the sadsack trooper, Catillo wasn’t pulling his weight in the unit. While everyone else was working, he’d slipped away for a smoke.

All I need is a slight squeeze of the trigger, you asshole, I thought. You’d never know what hit you.

That’s what went through my mind. But, with a sigh, I ended my idle daydream. I was slacking off myself. I was supposed to be keeping a watch on the detachment in the valley below.

Yet, I couldn’t help myself. Catillo and his equally useless buddy, Corporal Haddaway, were cowards. During the fall of Malati, while I was fighting with my comrades to stem a Tau attack, those jerks had run for their lives, abandoning me and the rest of the company to save their worthless necks.

I wish I’d gone to the commissar. I’m not sure why I didn’t. After surviving the evacuation of Malati, we’d twiddled our thumbs for a few weeks in some Emperor-foresaken recovery camp, licking our wounds. I guess I was too tired for the fuss.

Our devastated company eventually was redeployed to the battle lines north of the city of Aruna, a port on the main continent of Dar Sai.

Alas, after our heavy casualties at Malati, several units had been merged to bring us back up to strength, and now I found myself in the same platoon as Catillo and Haddaway.

Thankfully, as a sniper, I tend to work semi-independently of the rest of the platoon, so I can easily avoid those two jerks.

I set such idle thoughts away and got on with my job. The telescopic lens on my sniper rifle gives me a 40x magnification, allowing me to hit a target at 2,000 meters. So, I began scanning the tree line around our camp.

My platoon, the 1st Platoon, Beta Company, 6th Battalion of the 728th Regiment, had been tasked with defending a long and fertile river valley that ran north from the port of Aruna and then turned northwest toward the Hanui Valley, the original invasion site of the Tau.

It was believed that a large segment of the Tau army was far to the northwest, besieging the city of Pradeep. But, over the past year, Kroot auxiliary troops had been slowly gaining control of the forest to the northwest of Aruna. High Command was concerned.

For the next two hours, I sat atop my elevated position, scanning the surrounding forest. It was a warm day, the sun slowly cooking me in my thick fatigues, so I wasn’t comfortable. But my misery soon was forgotten as I caught sight of movement on the edge of the trees.

For a moment, I thought I’d mistaken what I’d seen. I couldn’t see anything now. Yet, I’d seen something. There was no wind, so perhaps a bit of wild life? I waited patiently, knowing that if there was something there, it would likely move again.

A Kroot scout watches Baker Company from the edge of the forest.

It was a Kroot. It crouched at the edge of the woods, watching our men at work.

As tempting as it was to blow its head clean off, there was no immediate threat. So, I reluctantly held my fire and voxed my superiors.

They told me to observe. They’d try to get a patrol behind it. They wanted a prisoner to interrogate. I didn’t tell them what they already knew. The woods belonged to the Kroot. They were woodland creatures, and we never got the upper hand in a forest fight.

If we wanted to take on the Kroot on their home ground, we needed artillery . . . and preferably some Hellhounds.

But orders are orders. Although I fantasized about pulling the trigger—and I kept my crosshairs firmly centered on the xeno’s forehead—I just watched and waited.

Nearly an hour passed. I guess it took time for a patrol to be organized, and I’m sure it moved slowly in an attempt to sneak up on its prey. But I could tell instantly when the patrol got close. The Kroot’s head suddenly jerked to its right, and it disappeared into the forest.

I voxed my opinion of what was going on and, naturally, the officer on the other end of the vox told me to quit thinking and just do my job.

Stupid grot-herder. What did he think my job was? I’m a sniper. Snipers that don’t think die.

Captain Faltz is a pretty sharp officer. But some of our lieutenants must be in-bred. Fortunately, the stupid ones are killed off pretty quickly . . . or they get promoted to staff work.

Okay, back to the story. I don’t need some commissar reading this and accusing me of disrespectful thoughts.

I was just signing off from my less-than-enjoyable vox conversation when the firing began. I could make out the sound of lasgun fire in the woods. But then I got worried. There was a roar of xeno gunfire—the distinctive “zip, zip” of their weapons quickly drowning out the fire of our men.

Then the firing stopped.

“Levers! What do you see?” It was Capt. Faltz on the vox link.

Pvt. Levers takes aim . . . and the first Kroot casualty of the day is recorded.

“It’s been reported that there is a platoon-strength xeno force out there,” Faltz shared. It was a statement, but there was a question in there. It was gratifying that the captain wanted my opinion.

“Sir, the Kroot slammed our men hard and fast. There’s more than a platoon out there.”

We’re screwed if there are that many out there, I thought. It’s a long hike back to the main defensive lines.

“Not enough facts to work with, sir,” I finally replied. “But I don’t think the Kroot are interested in a fair fight.”

“I agree,” Faltz said. “Things may get hot quickly, corporal. Stay sharp. If there’s an attack, you take out the high-priority targets. Out.”

For the next half hour, I scanned those woods as if my life depended on it. And it did. If the Kroot attacked with a sizable force, we’d have to withdraw. But falling back with the Kroot giving chase was a scary thought. I didn’t fancy withdrawing through the forests around us.

The only good news was that I was about 50 meters behind the rest of my platoon. If they got hit, I could, in theory, have a head start in any retreat.

But that was a joke. My job was to stay calm and kill officers, heavy weapons teams, and whatever else proved particularly dangerous. Catillo and Haddaway might run for it. But I don’t abandon my comrades.

My depressing thoughts were interrupted by movement on the forest edge. I had just enough time to vox a warning when a volley of xeno fire erupted, spraying high-speed charged particles across our line. I couldn’t take my eyes off my sniper scope, but I heard later that three men died from that initial volley.

The fight was on.

Click here to see more of A6A7’s arwork at DeviantArt.com.