The narrative for the Corvus Cluster came to complete stop in November—there was just too much to do to get our dedicated terrain table ready for the Shorehammer 2022 convention. We finished the table in time—and successfully hosted eight events—over the weekend of Dec. 2-4 . It was […]

TheGM: When a blog doesn’t publish anything for more than a month, that’s often a sign that the blog is running out of steam. That’s not the case with the Corvus Cluster. The lack of postings actually is a sign of how busy I am are creating content—specifically […]

If you’ve followed the Mos Eisley Project, you know that we’re working to create a tabletop desert town that’s similar to the infamous backwater community highlighted in the original Star Wars movie. We want to make it as cool as possible. That means we need to add some […]

As I work on building a backwater, desert town for our 40K narrative campaign, I’m confronting a minor but interesting aesthetic challenge: How do I blend together my 3D-printed, Star Wars-themed buildings with some resin buildings depicting structures more suitable to a medieval-through-20th Century setting? If you’ve read […]

TheGM: Back in February, I talked about the Mos Eisley Project—our plan to build a large and highly detailed desert city with a look inspired by the Star Wars movies. As I noted back then, the Corvus Cluster isn’t starting a Star Wars campaign on Tatooine. It’s just […]

Building ork huts with foam board

Although The Gaffer is our “ork guy,” I recently decided to build a few ork buildings for future skirmish games. Why not? My first decision was the aesthetic style I would use. I remember fondly the box-like ork buildings that appeared in White Dwarf  in its early years, […]

We’re calling it the Mos Eisley Project. But, no, the Corvus Cluster is not transitioning to a Star Wars theme. We’ve simply been fighting a number of battles in the deserts of Hegira, and we’re enamored by the potential of an exotic, sci-fi-oriented urban setting. The Gaffer and […] 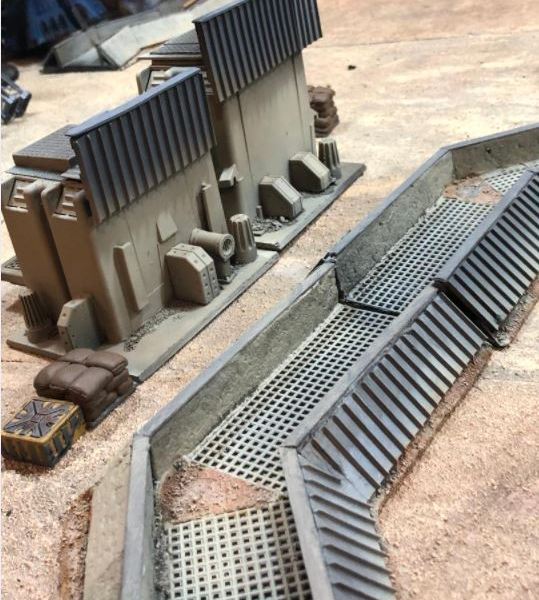 The Gaffer: It’s hard to believe, but this narrative campaign has been around for nearly seven years. After a very long hiatus, TheGaffer is back and at it. TheGM and I have played a four-week long Apocalypse battle to get reacquainted with the rules and try out a […]

TheGM: What is CNC milling? A milling machine is a 200-year-old technology that uses rotary blades to cut away material from a block of wood, plastic, or metal. It essentially carves away the material to create whatever it is that you want built. A computer-numerical control (CNC) milling […]

TheGM: If anyone looks closely at some of the battle reports of the past six months, they might notice that some of my battlefields are quite “terrain intensive.” There are several reasons for that. For one, I got into this hobby as a historical miniatures gamer. So, if […]