As the second year of our narrative campaign comes to a close, the strategic situation for the beleaguered Corvus Cluster remains relatively stable. But that is no cause for complacency.

The past year—736.M41 by the Imperial calendar—was witness to numerous battles across such worlds as Hegira, Dar Sai, and Al’gel. Armies clashed, and land was conquered, lost, and recovered. Meanwhile, the navies of various empires fought desperate battles in the vacuum of space.

A look at any strategic map of Hegira appears to show a stalemate on the desert mining moon of Sculptor II, with only a minor change in the battle lines near the Iron Spires.

That belies the crisis earlier in the year when the orks came close to conquering the moon.

On 3 10 736.M41—only 10 days into the new year—the orks seized the Iron Spires in what would prove the fourth battle fought over what may be the dangerous and desolate region of Hegira.

Led by a spearhead of Killa Kans and supported by Dakkajets, the orks crushed the Imperial defenses. (Orks take Iron Spires in Fourth Battle)

An increasing variety of ork weaponry—Killa Kans, Deff Dreads, and even Deff Koptas—complicated the Imperial defense of Hegira.

The Iron Spires had been a powerful defensive position. Once lost, Imperial forces had a difficult time containing the greenskin hordes. Only 42 days after seizing the mountain passes, the orks—this time led by a contingent of heavier walkers [Deff Dreads]—shattered yet another Imperial army and seized the Tarak Mines. (Tarak Mines lost to massive ork attack)

By now, the heavy casualties suffered by Imperial forces forced civil and military leaders into emergency measures, deploying hastily trained militia and conscript units to the front lines. A new defensive position was set up at the famed Barak Mine, the largest and most strategically important mining complex on the moon.

In the end, the mining complex fell, and the citizens of Hegira—having seen the orks advance hundreds of miles and destroy Imperial army after army—began to fear their moon was lost. (Panic spreads with fall of Barak Mine)

So great was this fear that Imperial authorities were forced to drastic measures. They denounced reports that Hegira was doomed and arrested a number of citizens deemed “rumormongerers.”

The Imperial Navy also seized three merchant ships that attempted to leave the planet—all found to be transporting frightened citizens and even Imperial officials who were attempting to escape what they assumed was a lost war. The ship crews and Imperial officials were executed; the civilians were sentenced to penal battalions where they could seek to earn the Emperor’s forgiveness by fighting the ork invaders. (Panic across Hegira: Is the world lost to the orks?)

As the orks moved toward Susa City—the capital of Hegira—the only good news to be found was word that the hero of Hegira, Major-Commissar Rael Dracos, had survived the battle for the Barad Mine. (Fiction: Discretion is the better part of valor.)

At this point, simple logistics turned the tide. Having endured heavy casualties in their march north—and at the end of a long supply line—even the blood-frenzied orks had to stop and regroup before making their final push northward.

It was a critical time. For Imperial authorities, the loss of Susa City, as the seat of Imperial authority and the most important supply and manufacturing center on Hegira, would be a devastating blow to public morale. As important, the fall of the capital city would have opened the Palatine Space Port to attack.

(The space port’s fall would have cut off all Imperial reinforcements—and that would have meant a total ork victory.)

Scraping together every last man, women, child, and tank, Imperial authorities readied themselves. The lines were bolstered with plascrete defenses, a last-minute reinforcement of tanks, and a new cadre of Skitarii, as well as thousands of conscripts who barely knew how to fire their freshly distributed lasguns.

Yet, it was enough. The orks had finally overextended themselves, and the attackers were almost entirely annihilated in what seemed, in hindsight, an easy victory. (Ork invaders repulsed at Susa City)

Regretfully, the Imperial army’s string of victories finally came to a close. Successful in exploiting their major victory at Susa City, Imperial troops had cut through the disorganized orks to retake a great deal of territory. But on 3 670 736.M41, Imperial forces were brought up short—and the months-long advance ended for the year. (Imperial advance stalls in Iron Spires)

After the fall of Malati at the end of 735.M41, much of the southwestern corner of Dar Sai’s main continent was under Tau control. On 3 006 736.M41, a small Tau force moved westward but were stopped by a contingent of the 18th Dar Sai PDF. (Imperial Guard defeats Tau at Sandeep Plains)

With an Imperial naval blockade in orbit, Tau Commander Swiftstrike was stymied in his military ambitions, and it took until 3 091 736.M41 before he could resume a modest offensive, taking a small port village as a prelude to an attack on the strategically vital Pradeep. (Tau drive north and seize port of Volantis)

Swiftstrike’s victory was short-lived. On 3 857 736.M41, after taking nearly nine months to resupply and refit his troops, the Tau made an unsuccessful attack on Pradeep. (Tau repulsed in Battle of Pradeep) 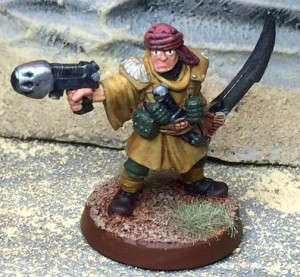 Col. Fakhri Pasha is commander of the 2nd Tallarn Regiment and is respected for leading his troops from the front line. He has perfected the highly mobile tactics that have made the regiment an elite unit.

While these battles were taking place, the defenders of the Sculptor System benefited from the arrival of reinforcements.

Among them were the 2nd Tallarn Regiment, an elite desert-fighting unit that was deployed to Hegira, and the ancient dreadnought, Boras, who arrived to reinforce the 4th Company of the Knights of Altair, an Adeptus Astartes chapter that is operating in the Corvus Cluster (but whose activities have not been shared by Imperial authorities).

There also are rumors that Tau ships have reinforced the xeno foothold in the Sculptor System. (Rumors of the Underhive) 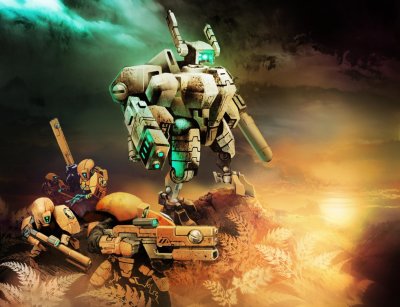 Commander Swiftstrike proved a resourceful Tau leader, although the Imperial blockade of Dar Sai has cut his supply line and left him scrambling to conquer a world without reinforcements.

After meeting brutal resistance to their invasion of Al’gel II in 735.M41, the Tau found themselves besieged for months in their beachhead. It took a major fight—with more than a quarter million ork casualties in two days—before the Tau finally began a new advance on 6 201 736.M41 (Tau break out on Al’gel II)

As the year came to a close (6 919 736.M41), a small Tau-ork naval battle made clear that the naval campaign for the Al’gel System was anything but over. (Tau and ork ships clash at asteroid KV-9)

Few realize that the Inquisition roams the Corvus Cluster defending the Imperium from xeno threats.

Nearly a year after Rogue Trader Adeon Drake was involved in the wakening of the Necrons on Stigmata, the ancient race of cybernetic warriors began to explore beyond the boundaries of their world.

Just before the beginning of the year, the security beacons above Stigmata went silent, and an Imperial gunship sent to investigated disappeared. Later in the year (6 598 736.M41), Imperial Navy Task Force Bellum 978 received a distress call from a scientific outpost in the Dryilian System, approximately 75 light years rimward of Belliose III. Soon after, Imperial authorities lost contact with those Imperial ships.

It took time for Imperial authorities to put together the pieces, but on 6 649 736.M41, a minor official of the Inquisition, Adonai Drusus, made a request to visit the world of Dryilian to investigate what had happened. (Mystery in the Dryilian System) No word yet on his findings.

The Space Marines launched a raid on Media III in a bid to stop Tau weaponry from reaching the beleaguered Yaisdra Subsector, a neighboring region of space.

Events outside the Corvus Cluster have made themselves felt over the past year. In a nearby region of space, the Tau have invaded the Yaisdra Subsector.

Assault on Yaisdra IX is another narrative campaign being fought in Great Britain, which is collaborating with the Corvus Cluster as our parallel campaigns engage the Tau.

Intelligence informed Imperial commanders in the Yaisdra Subsector that key technology was being developed on Media III (in the Sculptor System) that could affect the Imperial defenses of Yaisdra IX. To stop that technology, an Admiral Codleen of Task Force Solaris suggested an interception of that technology before it reached Yaisdra.

This led to a raid of a Tau base on Media III by a squad of Space Wolves on  3 803 736.M41. After Wolf Scouts performed a reconnaissance of the base (A grizzled Wolf keeps watch on the Tau), Space Wolves landed by drop pod and destroyed most of the base, although a small portion of the Tau technology was extracted at the last second by Tau forces. (Space Wolves raid xeno base on Media III)

Ignorant speculations? Or inspired prophecies? It’s impossible to tell whether the rumors that spread through the poverty-stricken neighborhoods of Imperial cities foretell the future. (Even those who guide events aren’t certain what the future holds.)

TheGM: Thus ends another year in the Corvus Cluster. I hope this synopsis of 736.M41 helps. It’s certainly interesting to me to see how the “narrative” of our campaign continues to develop in depth and breadth. I can hardly wait to see what will happen this year!

Tagged as: Campaign Info, From the GM, History, Strategic Update