Unable to stop an ork warband with long-range fire, this Skitarii company is charged and overwhelmed, allowing the xenos to advance deep into the Imperial line.

The Iron Spires and Tarak Mines created a bottleneck that stymied ork efforts to invade Hegira’s northern continent. With these strategic points captured in a quick, 40-day campaign, the orks now are in a position to cross open deserts and attack without hindrance.

TOPAC MANUFACTORUM–A massive ork attack on the Tarak Mines ended in defeat for Imperial defenders yesterday, with the fall of this strategically important settlement raising concerns that Imperial control of the war-torn world of Hegira is threatened.

Authorities confirmed today that the 728th Cadian Regiment, along with PDF auxiliary troops, suffered nearly 4,000 casualties in the 14-hour battle. Imperial troops were forced to retreat nearly 100 kilometers across barren desert, with ork battlewagons (eh, Trukks actually—Rumlar) harassing the exhausted and beleaguered troops for most of the way. It is believed the vast majority of casualties are fatalities.

“No doubt this retreat will send a shiver of fear throughout the citizenry of Hegira,” Praetor Favious Syagrius, Hegira’s Imperial head of state, said in a press conference reporting the battle’s outcome. “But no one should succumb to panic. Thousands of troops are being deployed to meet this threat, and, with the Emperor’s blessing, we shall prevail in driving the xenos from our world.”

These reassurances were not sufficient for citizens in the settlements closest to the battle—now threatened by the xeno invaders.

And that threat is very real, admit military sources who asked to remain anonymous. For the past year, the Iron Spires traded ownership several times, as both orks and Imperial leaders recognized that the difficult mountain pass served as a “choke point” limiting the xeno’s access to Hegira’s northern continent. 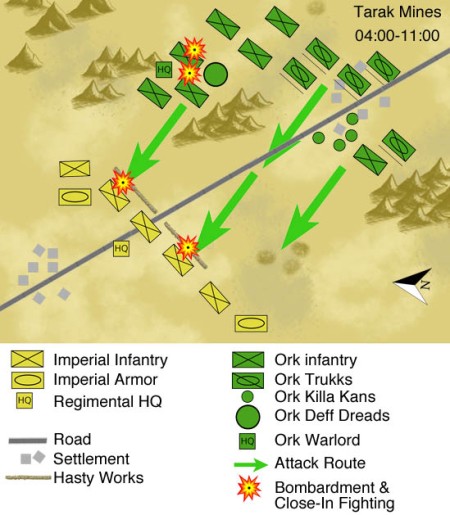 With orks now through the pass, their forces have room for maneuver, and several Imperial settlements are vulnerable to attack. Military sources suggest that the open desert around the Tarak Mines will provide the orks with the opportunity to put their mechanized forces to good use. Several avenues of attack are available to the orks, requiring Imperial forces to spread themselves thin.

In addition, authorities say smaller raids—no doubt spreading terror and disruption across the region—are likely to be a major problem.

The battle for the Tarak Mines began on 3 052 736.M41 when a massive ork horde left the Iron Spires and approached the settlement from the southeast. A defensive line set up outside the main mine complex consisted of three battalions of the 728th Cadian Regiment, two battalions of Adeptus Mechanicus Skitarii, and a battalion of PDF reserve troops. A small armored contingent acted in a supportive role. 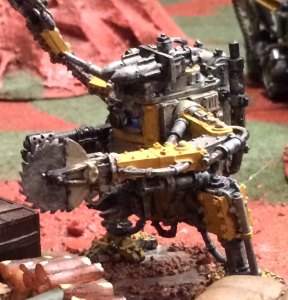 A contingent of Deff Dreads, a new weapon in the ork arsenal, easily sliced through the Imperial lines and tore through the armor of a platoon of Lemon Russ tanks.

Thick cloud cover denied the xenos their typical air support (Rumlar left his aircraft at home by mistake—TheGM), and Imperial artillery caused massive casualties to the ork hordes that descended on the Imperial troops.

But these advantages proved inadequate to stop the xenos when they reached the Imperial lines on 3 055 736.M41. Although several advancing columns were thrown back by massive lasgun volleys, where the orks did reach the hastily built Imperial earthworks, the xenos slaughtered our troops and broke through. Several “Deff Dreads”—crude and ugly xeno walkers not seen previously on Hegira—used the breakthrough to outflank one Imperial armor platoon and destroy it.

Although the ork warlord was killed in the latter half of the day, this small victory came too late to save the day.  Some military observers commented critically of the battle plans of the commanding officer, PDF Colonel Dale Sergios, which were deemed overly cautious.

“All forces are supposed to deploy advance troops to break up an ork attack—and to engage in a degree of offensive maneuver,” observed one military source. “Those advance troops were kept back as a reserve, where they were nearly useless, and by trusting to firepower to stop the orks, Col. Sergios allowed the ork warlord to focus his entire force on one point of our line—and overwhelm it.”

“That was, the officer noted, “a recipe for disaster.”

With the Imperial line broken, there was no choice but to withdraw. Col. Sergios,  however, did not give the order. Having planted his regimental standard squarely in the path of the ork assault, he bravely attempted to slow the ork advance, and the colonel and his command squad were swamped by a deluge of battle-frenzied xenos.

Only through the heroic efforts of individual officers, who took command of the remaining troops around them and led them in retreat, was a total disaster averted, military authorities say.

“It was a hard 100-kilometer withdrawal; our troops harassed the entire distance by enemy forces,” said General Tiberious Vectrix, supreme military commander of planet defenses. “But, with the exception of the Skitarii, which fought to the last man, each company survived with a core cadre of troops intact. They are still combat ready.”

In a day of tragedy, the commanding officer charged with defending the Tarak Mines, along with his command team, was overrun and killed by an ork breakthrough.

TheGM: After a year’s fighting, being coached along the way by TheGaffer, I forgot every lesson I’d learned.

I specifically organized my force around special weapons teams, who were to move forward and serve as “speed bumps” to delay some ork units—and allow my immense Imperial firepower to focus on a handful of ork mobs. This would prevent TheGaffer (our ork leader) from hitting the Imperial line with every ork unit at the same time.

But I didn’t do that. We rolled up the mission, The Relic, and I decided to sit back and blast the ork line, then when the orks were devastated, launch a counterattack to take the objective. But although my fire disrupted some of the ork attacking columns, I didn’t use my “speed bumps” and too many orks hit my line.

TheGaffer is good, and I’ve got to be really on my game to have a chance against him. For this battle, I was brain dead, and now I fear that Hegira may fall.

TheGaffer: I was actually quite surprised by the outcome. We agreed on another 1,000 pt battle, and I had built my army list around two Dakkajets. Unfortunately I forgot to bring them! So I had very little in the way of accurate shooting. Fortunately, I brought my Killa Kans  and a Deff Dread and was able to make up those 240 points with some heavy hitting power (if not firepower).

The Orks set up first, so I had a strong force made up of infantry in the center, with the Deff Dread (carrying two flamers) up front providing cover. Gretchin would lead the way. The warlord with his Nobz and a mob were on the right, and a medium-sized mob with the two Killa Kans on the left. A Trukk mob was held in reserve. There would be no finesse in this game, just a Zulu-style frontal assault against Rorke’s Drift. 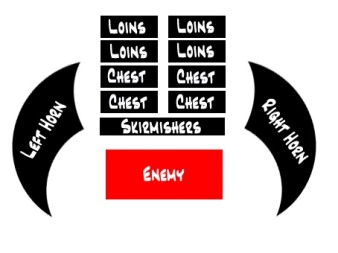 In TheGM’s defense, he had been playing Napoleonics for the past couple of weeks, so he set up his force in a Napoleonic firing line. Unfortunately he had not thought of his Chimera and Leman Russ as cavalry. Putting his infantry shoulder-to-shoulder allowed me to concentrate my forces while, at the same time, keeping a good two-inch interval among all my troops. This would minimize casualties from all the template weapons he can deploy while allowing me to close decisively on his front rank. Once the troops started moving, there was little else that could be done. It was just a matter of hitting his line at several points so he could not shift troops to reinforce the center.

The Corvus Cluster is a hobby blog that focuses on our wargaming adventures in the Warhammer 40K universe.