Shorehammer Report: Cult of the Haruspex

Inquisitor Gideon Locke and his recon team struggle across the sun-blasted desert of Morkai to uncover the secret of the Haruspex.

Civil disorder on the world of Morkai can be attributed to the growing influence of the Cult of the Haruspex, a terrorist organization that is spreading among the mutant communities in the lowest levels of the hive cities.

The cult promises that a “great liberator,” the Haruspex, will throw off the Imperial yoke and see mutants rule the planet. Inquisitorial assistance is requested to deal with this threat.—Astropathic message from the Council of Electors, ruling body of Morkai to the Ordo Hereticus.

Inquisitor Gideon Locke lowered his monocular and rubbed the sweat out of his eyes.

It was brutally hot.

He was lying on his stomach, his head barely rising above the sand dune that allowed him a panoramic view of the barren landscape around him. He thought lying down would be a relief from the endless walking, but he was wrong. A harsh sun beat down upon him, while the heat of the planet’s desert sand burned into his chest and stomach, despite his environmentally controlled body suit.

It was as if he was Grox meat slowly being baked.

“You can just make out the city on the horizon.”

Looking to his right, Locke studied the grizzled sergeant who commanded his Inquisitorial stormtroopers. Despite the heat, Sgt. Maêl Basione had insisted on wearing his baroque stormtrooper uniform and carapace armor, and his face was bathed in sweat.  Yet the veteran warrior showed no other sign that the heat bothered him.

The ruins of the lost hive city of Ungolath, a mysterious haunt of mutants that lies half-buried in the desert.

The dark-haired Inquisitor put the monocular back to his eye and looked out over a flat plateau of sun-baked sand.

There is was: the lost city of Ungolath.

It was little more than a dark smudge on the horizon, although Locke could barely make out two tall hive towers still standing, their spires rising into the cloudless sky. 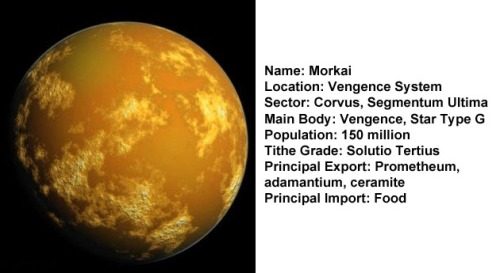 Basione spoke again. “It’s hard to believe those isolated ruins once were home to 150 million people.”

I know the city’s history, he thought. How, nearly a millennia ago, the city’s leaders stupidly launched a pogram against its teeming mutant population. Instead of ridding themselves of the genetically tainted populace, the culling led to murderous riots that saw more than 30 million die in a single, horrific night and the city destroyed. Millions more died as its residents fled into the desert.

“There’s the rub, isn’t it,” Basione said. “If this really is the center of the mutant rebellion—and where the Haruspex rules—how are we going to get to the city across open desert. Surely we’ll be seen?”

Some say the Haruspex is a myth. Others claim he is a centuries-old mutant who will overthrow Imperial rule and turn the planet of Morkai into a haven for mutants everywhere.

For all we know, we’ve already been spotted, Locke thought. Of course, that means we’re dead men.

There were nearly 20 men accompanying Locke on this reconnaissance mission: stormtroopers, acolytes, and a handful of desert guides from the planet’s Planetary Defense Force (PDF). The Inquisitor accepted without thought that their lives, as well as his own, were expendable.

What matters is our mission, he thought. We need to learn more about what’s happening in Ungolath. Is there really an army there as the mutants boast? Is the Haruspex real or a fiction, a  bit of propaganda?

Several attempts had been made by local authorities to answer those questions. Individual spies, even an armored column of troops, had approached the city, only to disappear without a trace.

But the questions needed to be answered. It was one thing when the mutants raided isolated communities. But, increasingly, small armies of well-armed mutants were ranging across the desert, disrupting trade and threatening larger and larger towns. Things were getting out of hand.

And what of this Haruspex? Locke thought.  The infamous mutant leader ruled Ungolath during the mutant war of centuries ago. Surely he can’t still be alive?

Despite a blazing sun, Inquisitor Locke marches resolutely to his fate.

Yet, many mutants insisted he did live. Perhaps it was a new leader who has taken the name to rally the mutants.

Locke pointed out some broken ground to their left. “That’s where we’re headed,” he said. “Those rocks are the beginning of some rough ground, low ridges, and shallow fissures that head directly toward the city. It’ll get us to the outer ring of shanties that surround the ruins.”

“So we do a little scouting . . . see if we can pick up a few scavengers and convince them to spill their guts?” The sergeant looked eager for action.

“That’s the plan.” Locke continued to study the ground ahead. “Our objective is ambitious but will be conducted meticulously. We interrogate an isolated individual, study the lay of the land, and then decide on our next step. I want to know about this Haruspex.”

“And if we run into trouble?” Besione asked.

Without hesitation, Locke replied: “We kill everyone in sight before they kill us.”

TheGM: So, here’s your introduction to the skirmish game, “Cult of the Haruspex,” which is scheduled Thursday evening at the Shorehammer gaming convention in Ocean City, Md., Nov. 21-24.

So, why Thursday, when the convention really doesn’t start until Friday? Well, the whole goal of the Corvus Cluster Narrative Games is to provide a brief diversion for attendees when they’ve got spare time on their hands. And, for those arriving early, this skirmish adventure is, I hope, a better option than sitting in a hotel room watching TV.

This will be Inquisitor Locke’s introduction to the Corvus Cluster and our newest “hero” of the Imperium. A member of the Ordo Hereticus, he’s been drawn to the desert world of Morkai to stem the growing mutant threat . . . and to combat a cult that appears to have some heretical ideas about Imperial rule.

After the convention, I’ll post the scenario details in case people are looking for a new skirmish scenario. And, of course, the fate of Locke’s mission will influence future events on Morkai—what happens at Shorehammer will effect our five-year-old narrative campaign.

So, will Locke compete his mission . . . or is he taking an undue risk sneaking deep into mutant territory? That’s a question to be determined at Shorehammer 2019.

Learn more about the desert world of Morkai.

Learn more about the Haruspex.

The Corvus Cluster is a Warhammer 40K narrative campaign documenting our gaming adventures in the fantastical sci-fi universe of Games Workshop.