“Does anyone care to explain to me why the Space Wolves are operating in the Sculptor System without informing me? Am I not the senior Imperial military commander in this system? Why is it that no one informed me of military operations on Media III BEFORE it happened?“—Commodore Gadea Hannard, commander of Fleet Corvus. (Comments overheard as the commodore screamed at his staff.)

A shielded surveillance satellite orbiting Media III has intercepted a Tau incident report concerning what appears to be a brief firefight between Tau occupational forces and a small recon team of Astartes warriors from the Space Wolf Space Marine Chapter.

As you may recall, Fleet Corvus cooperated with the Space Wolves in 736.M41 in a sabotage raid on Media III to prevent experimental Tau weaponry from being transferred to the Yaisdra Subsector. Other unconfirmed Space Wolf activity also has been reported in this sector.

What follows is  a partial translation of this intercepted report. I have translated some Tau terminology loosely, such as referring to the Space Wolves by name rather than the cumbersome “genetically enhanced human warriors notable for their beastial characteristics.” I also converted dates and other data to Imperial standards. 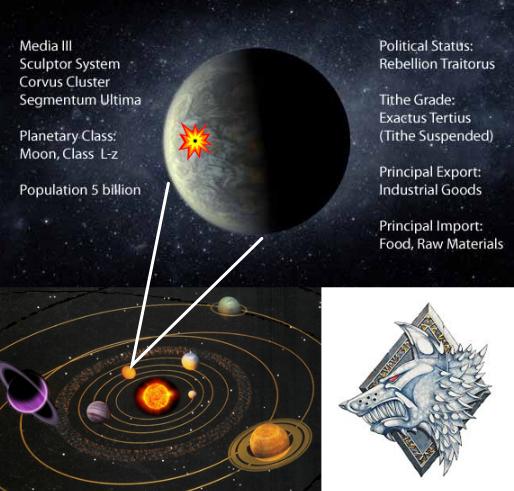 On 4 046 739.M41, a surveillance drone first alerted human-allied security forces to the presence of an Astartes scouting force operating in the slums of Ctesiphon, a hive city near the equator of Media III.

Tau supervisors ordered all human security forces to maintain their distance, as the entire Imperial populace of Media III has been indoctrinated since birth to view these genetically enhanced warriors as a direct and divine representation of their god-emperor.

It was determined that direct contact with these warriors, even by security forces indoctrinated in the Greater Good, could arouse subconscious and emotional responses that might undermine human loyalty to our empire.

Thus the decision was made to send Tau troops to deal with the Astartes, whose insignia indicated they were part of a subsect of the Astartes known as the Space Wolves.

The basic plan of both forces did not stretch anyone’s military acumen: The Space Wolves advanced; the Tau stood and fired.

Alas, our military forces are stretched thin on the planet, and our initial response team consisted of a single fire warrior team.

This team approached the Space Wolf position from the east and, in an attempt to ambush the moving Astartes, set up a firing line in their path. When the Space Wolves came within firing range, the fire warriors opened up with their pulse rifles.

It does not appear the ambush was a surprise. As the fire warriors opened fire, the Space Marines disappeared from sight. At first, the team commander believed the Astartes, engaged in a covert operation, were withdrawing into the surrounding slab heaps and abandoned shanties in the area. But he was mistaken. His fire warriors began reporting brief sightings of the human warriors, each sighting closer to the Tau firing positions.

The Space Wolves were aggressively approaching within melee range of our troops.

Suddenly, the Space Wolves broke free of cover and charged. This provided our fire warriors with their first opportunity to fire upon the humans on open ground, and they enjoyed initial success—with several Astartes brought down. For a moment, the human attack appeared to be failing.

Encouraged by this success, the fire warriors advanced with the intent of delivering the Mont’ka [killing blow].

Part of the Tau firing line. As long as the fire warriors remained in cover, firing from a distance, they proved the equal to the human genetically engineered warriors. Once they advanced into the open, however, the speed and strength of the Astartes proved overwhelming.

Yet, the decision to advance was ill-advised. The remaining Astartes continued forward into our warriors. What’s more, the fallen warriors rose despite their wounds and joined the charge.

Our advancing warriors suddenly found themselves in melee with a foe far beyond their physical abilities, and a number of fire warriors were killed within seconds.

A handful of fire warriors had held back to provide support fire, but after a supporting drone and Stealth Suit were shot down by the advancing Space Wolves’ weaponry, the morale of these few survivors broke. They fled.

By the time additional Tau reinforcements arrived, the Space Wolves had disappeared, and despite an extensive search on foot and by drone, no sign of the infiltrating humans could be discerned.

It is believed that these human intruders continue to operate on Media III.

Since the 736.M41 raid, Fleet Corvus has had no communications with the Space Wolves. Until this transmission, it was believed that the Space Wolves had departed the Sculptor System. If the Tau have correctly identified the Spaces Wolves as the human warriors on Media III, it appears the Space Wolves are operating independently, although it is unclear if they  are acting on their own agenda or on behalf of another Imperial authority (Inquisition?).

I request permission to initiate an astropathic communication to both Fenris and Inquisitor Serillian in an attempt to encourage a more forthright collaboration among Imperial forces.

Permission granted. Just don’t hold your breath that the Space Wolves or the Inquisition have any concerns about keeping us in the dark.

TheGM: This was a weekend pickup game using Shadow War: Armageddon. Both forces did what they needed to do. The Astartes needed to get in the face of the Tau; the Tau needed to hang back and shoot.

Although I characterized the decision of the Tau to advance as a mistake, that was for the “fluff.” In reality, such a small game can turn on a dime, and when you see the vulnerability of your opponent, you need to go in for the kill. You may lose, but if you hang back (which I often do), things are likely to go south.

So it happened. At one point, I simply needed a failed morale roll by the Space Marines—or a lucky roll on my point-blank fire to win the fight. I didn’t get it.