The attack on the caravan road was led by Skitarri and the Home Guard of House Fenris.

IMPERIAL NEWSCAST (3 021 738.M41)—Imperial authorities on Morkai announced today that the Home Guard of House Fenris, the ruling family of Charcharoth, successfully defeated mutant troops that had seized the sole caravan route linking the hive city of Totallia to the rest of the planet.

Supported by Skitarri and Sentinels, an entire company of Home Guard attacked the entrenched mutant defenses . . .

Mutants—A fortified line of cargo crates and scavenged debris lined the mutant line (equivalent to two Aegis Lines). With no way to determine where the Imperial attack would occur, the two scavenged Icarus lascannon were deployed on the center of the line, supported by one squad of mutants and the mutant commander.

Another squad was positioned to the north atop a sand dune, although close enough to redeploy to cover a gap in the lines if the Imperial troops attempted to exploit the mutant flank. A small squad of genetically enhanced troopers were deployed south of the mesas, with another mutant mob, along with a choir of psykers, deployed behind the mesas as a reserve for the center of south.

In the abandoned desert town behind the lines, another small group of genetically enhanced mutants waited in reserve.

Tactical Thinking: Uncertain where the main attack would fall, the mutants were disadvantaged by their lack of intelligence on Imperial intentions and forced to defend a wide front. Their hope was they could redeploy their reserves quickly to meet the main Imperial attack.

Imperial—With the advantage of deploying second, the mechanized force of Skitarri in Chimeras were deployed to attack the south flank, supported by Home Guard and Skitarri on foot. Both command squads also joined this force.

The center was covered by supporting heavy bolter teams, while two squads of Home Guard were deployed to the north. 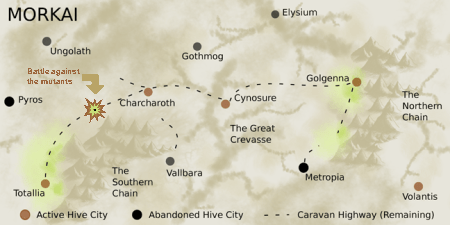 Tactical Thinking: No attack on the center was anticipated. By attacking on the flanks, it was hoped the mutants would not be able to concentrate their forces. Also, by focusing on the flanks, both attacks would take advantage of the terrain to either shield and/or slow mutant reserves as they redeployed.

The main Imperial attack, however, was to the far south.

TheGM: Bold numbers in the battle report identify points on the Battle Map.

A sand storm raged during the first turn (Night Fighting), so visibility was minimal. Yet, the mutants recognized that their weak north flank was at risk, so one mob of mutants left their position on the sand dune to cover the unoccupied entrenchments to the north. (1)

At the same time, three genetically enhanced mutants left the shanties and headed to the northern entrenchments to join the defenses. [Classification undetermined, but troops nicknamed them “Super Mutants.”] (2)

The Icarus lascannons fired but missed. To the south, the genetically enhanced mutants [classification still to be determined] fired unidentifiable power weapons at the lead Chimera and achieved a glancing hit. (3)

To the south, Imperial troops advance quickly (Flat Out!) in the Chimeras, with the multi-laser-armed transport maneuvering to screen the Chimera with the heavy flamer. The supporting infantry advance at the run. (4)

The heavy bolters rake the mutant entrenchments but fail to cause casualties. To the north, the two squads of home guard also advance at a run, using the cover of the sand storm to protect them. (5)

The mutants second turn is less than stellar. Once again, their Icarus guns fail to hit, and their mob of psykers (6), despite loud chattering and chants, could not focus their Warp powers to do any harm.

To the south, the genetically enhanced troops fire again, this time targeting the Chimera armed with a multi-laser. They manage a glancing shot. (7) A plasma gun in the mutant firing line manages a glancing blow on the flamer-equipped transport. (8) The gun overheats and kills the mutant. (9)

In the north, the mutants managed to reach the entrenchments before the Imperial troops. Only five have a line of sight and three hi ta target, but the Home Guard’s flak armor saves anyone from harm. (10)

The Home Guard advance across the Morkai desert, supported by the inspiring cries of Ministorum Priests.

To the south, the fighting begins at close range. The Chimera with the heavy flamer rushes forward at cruising speed to block the fire of the genetically enhanced mutants, a move that denies the vehicle the opportunity to use its flamers. (8)

The second Chimera advances slightly, and its Skitarri disembark. (11) The Chimera’s multi-laser manages to kill one of the large mutants (12), but the Skitarri fire is stymied by the mutant entrenchments. To the rear, the infantry on foot run forward, so they will be in range to shoot effectively on Turn Three.

In the center, the heavy bolters open up again on the center of the mutant line and manage to kill one mutant. (13)

On the north flank, both squads of Home Guard fire, killing two mutants (one of which was the mob leader). (14) The Scout Sentinels also appear on the flank, behind the mutants, and also open fire on the mutants but miss. (15)

To the north, the mutant firing line opens up with a volley and kills three Home Guard. The troops  shrug off the casualties and continue their advance. (16)

Meanwhile, the mob of larger genetically enhanced mutants, armed for melee fighting as well as fire, charge the arriving Sentinels. One clubbed mutant manages to damage one of the Imperial walkers with a glancing hit. (17)

The Icarus lascannons fired, penetrating the Chimera with flamers and immobilizing the vehicle. (18) Farther south, the other genetically enhanced mutants target their fire on rear transport and destroy it.

Once again, the mutant psykers struggle to call upon the warp. Their first attempt fails. Their second attempt produces a ball of witchfire that lands upon a squad of Skitarri and kills five. The squad leader rallies his men to fight on. (19)

The mutant reserves move south of the mesa and join the defense of the southern entrenchments. Their volleys are ragged, killing only one Skitarri. (20)

On the north flank, the two squads of Home Guard advance to close range of the mutant entrenchments and fire a volley that kills all but two of the remaining mutants. Despite their horrific losses, the mutant defenders desperately hold their ground. (21)

The Scout Sentinels attempt to stomp the Super Mutants that have assailed them, yet, despite the walkers’ hydraulic-powered limbs and armor, they manage only a light wound on one. (17)

In the center, the heavy bolter teams kill two more mutants in the center of the mutant line (22), and to the south, the entire Imperial line targets the mutant psykers with a massive volley of lasguns that utterly annihilates the Warp-cursed mutants to the last man. (23)

Click her to go to Part II of the battle.