The Knights of Altair battle the Necrons for control of the Imperial outpost. Death to the xenos!

“Let’s move it, people,” Drusus yelled, targeting a xeno’s head and blowing away a sizable chunk of the metallic skull.

The xeno attack had come quickly. No sooner had Drusus and his men left the security room that auspexes warned of approaching bodies. His storm troopers had set up an ambush, but the xenos shrugged off the initial volley of hot-shot lasgun fire.

Clearly we need heavier weaponry than flashlights, Drusus thought, using the derisionary term that guardsmen use to describe their lasguns. Every Imperial warrior longed for the immense firepower afforded by a Space Marine’s boltgun.

Drusus waited for a pause in the xenos’ fire and bolted down the corridor. Behind him, a storm trooper tossed a frag grenade, more in hopes of distracting the xenos than harming them. None of the xenos had fallen to the storm troopers’ fire.

The storm trooper’s tactics paid off. It did slow the Necron advance, but there was a high cost. As the last trooper to turn and run, he was targeted by half a dozen gauss flayers and shredded to the molecular level.

“Be advised, detonation in three, two, one.” A moment later, an explosive roar swept down the corridor—and the deck beneath Quintas’ feet shook violently.

Although his squad had retreated 50 meters down the corridor, the flames of the explosion —along with the shock blast—reached out to them. The brother-sergeant and his squad were quickly engulfed by fire, although their armor protected them from its terrible effects.

Without comment, the ten Space Marines hurried down the corridor that led back to their ship.

Almost at the same moment, the station’s alarms sounded, a blaring screech quickly lost as a series of secondary explosions shook the station. Perhaps, Quintas thought, he had been hasty in setting off an explosion in one of the most critical areas of the outpost.

Then again, he thought with a slight smile, he now had every excuse in the world to evacuate the outpost … and avoid casualties.

Quintas activated a private channel on his vox. “Drusus. There have been a series of explosions in the generator chamber, and I expect a chain reaction to seriously damage or destroy this station. We are evacuating.”

“Understood.” The approbator’s response was clipped and his voice sounded strained, but the sound of gunfire in the background indicated the Inquisition agent was too busy for a lengthy conversation.

“Fall back,” Quintas ordered his men. “Nedael, see if your auspex can tell me where the approbator is.” 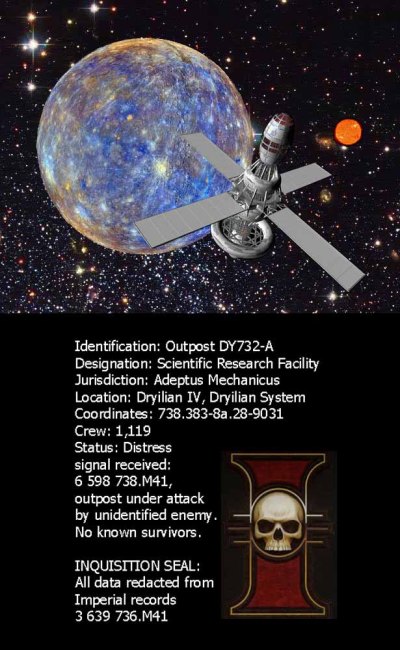 rusus and his men were running. The station was coming apart, and the young inquisitor-in-training felt the decking beneath his feet shake so severely it was hard not to fall.

It didn’t help matters that at least a dozen xenos were giving chase, firing their weapons in his general direction.

Two storm troopers were gone—vaporized by the hellish green energy beams of the xeno weapons.

Another trooper had lost his arm below the elbow, but combat stimulants—automatically injected into his system by his body armor—were keeping him on his feet.

Another green beam flashed overhead and vaporized part of the ceiling. It appeared that the xenos’ aim also was suffering from the uncertain footing.

After another ten meters, Drusus reached the intersection he was seeking and turned the corner. Ahead, Quintas and two Space Marines were waiting, weapons pointed in their direction.

Drusus didn’t bother with formalities. Behind the brother-sergeant was the outer hatch that led to the Knights’ shuttle. He ran past the Astartes, through the exit hatch, and onto the shuttle.

In the corridor behind him, he heard a burst of bolter fire and two sizable explosions. As per their training, his storm troopers already had turned and were ready to fight, although they carefully kept their distance from the giant Knights already stationed at the shuttle’s hatch.

A moment later, Quintas and his two Marines entered the shuttle, moving unhurriedly. Apparently the Necron threat had been successfully dealt with.

Over the vox, Drusus heard Quintas speaking to the shuttle pilot: “Detach and pull away from the station. We return to the ship.”

Two hours later, Outpost DY732-A was no more. Once safety aboard the strike cruiser, Quintas ordered all ship batteries to open fire, and the 1,000-meter-tall space station was quickly ripped apart.

But that was not sufficient for the brother-sergeant. He ordered the ship to target the largest wreckage until there was nothing left larger than a Chimera transport.

Such firepower had shifted the trajectory of much of the remaining wreckage, which was now swiftly descending toward Dryilian IV. Several pieces were entering the planet’s thin atmosphere and their fiery descent created quite a spectacular display.

Drusus watched those flaming comets fall from the bridge. Quintas stood beside him.

“Did you discover what you wanted to know?” the brother-sergeant asked.

“I reviewed the security records,” Drusus said. “The xenos teleported to key areas of the outpost—command center, engineering, security—and opened fire. It doesn’t appear the crew had any knowledge that an attack was coming—there was no time for an effective defense to be organized.”

“What did these xenos want?” Quintas asked.

“That is still unclear,” Drusus said. “Most of the crew was put to death. A few dozen were herded into a cargo bay and teleported off the outpost. I have no idea why.”

“So they are lost?” The tone in Quintas’ voice turned the question into a statement.

“Not lost,” Drusus said. “Just before the xenos appeared, your ship’s sensors recorded an unidentified energy surge on the planet’s surface. The energy readings are consistent with Necron technology.”

Quintas looked down at the inquisition agent. “If you intend to descend to the planet’s surface, understand that the xenos’ military resources may be greater than our own. The likelihood that we can descend, investigate, and withdraw successfully is … problematic.”

A sigh of resignation escaped Drusus’ lips. “I understand. But I have my orders—as do you. We must get to the bottom of this.”

If Quintas disliked this decision, he didn’t reveal it. He simply turned to the ship captain and gave the order: “Prepare a gunship. We are heading to the surface.”

TheGM: A small Kill Team action is the basis of this fictionalized account of the boarding of Outpost DY732-A. Alas, real-world demands on my time prompted a significant delay in writing up this report—or playing the “days later” landing on the planet.

But this latter fight is coming. Now, months later, “Shadow War: Armageddon” has been released, and it’s the perfect 40K rules set for a small skirmish action on the surface of Dryilian IV.

I’m looking forward to moving forward with the Necron story in the Corvus Cluster. At a recent convention, I picked up a sizable Necron collection already built and primed. So I should have a thousand-point army by the end of summer.

I’m also looking forward to developing the character of Abnightus. Originally just a throwaway plot device, this mysterious Tech Priest is “growing” on me. I don’t know yet if he’s a good guy or bad guy, or if he’ll save the day or face a horrible fate. What would be the fun in knowing? We’ll just see how the story unfolds.

Click here to return to Part 1 of this battle report.

The Corvus Cluster is a Warhammer 40K blog documenting our wargaming adventures in the sci-fi universe of Games Workshop.