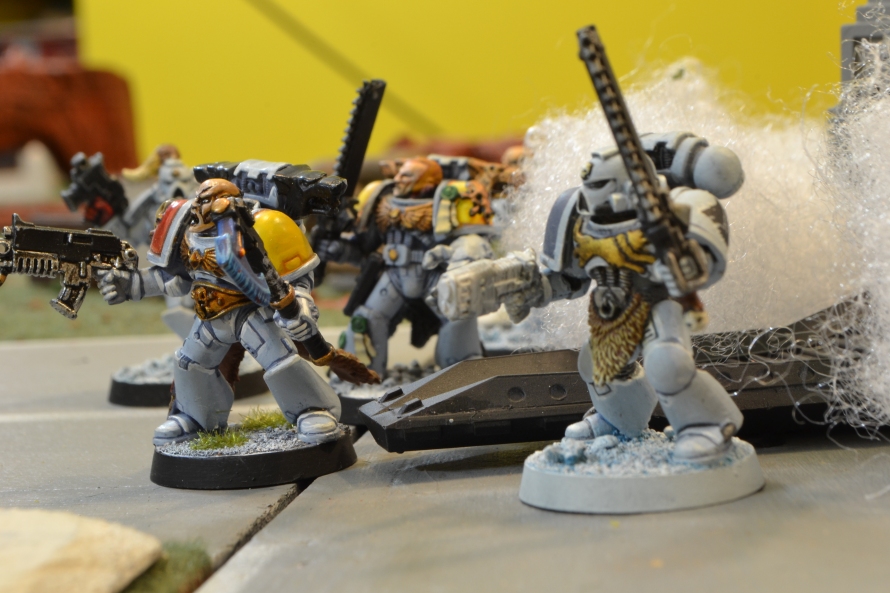 While the Space Wolves appear to have their mission complete, the Tau attempt a daring evacuation of key technological components through an escape hatch behind the white tower. Thankfully, Brother Stormbrow had left nothing to chance–and he was positioned to react to the xeno move.

Stormbrow was long in the tooth, but what are three centuries to an Astartes? The Wolf Scout was a warrior, and while his two companions laid down a rain of fire on the xenos, Stormbrow ran toward the transports at twice the speed of the fastest human athlete.

He reached the far left Devilfish while Valdar’s warriors were still 50 meters away, and with hardly a thought, he pulled a grenade from his belt, armed it, and tossed it at a concentration of Tau fire warriors that had just noticed the Wolf Scout’s proximity. As they raised their pulse rifles, the grenade exploded.

The Devilish was revving its engines as two Tau crewmen struggled to lift a final cargo container from a hover sled and carry it into the transport. Startled by the grenade’s explosion, they noticed the approaching Space Wolf too late. In a blink of an eye, Stormbrow had closed the distance to them, and the two-plus-meter tall Space Marine smashed the skull of one xeno with the butt of his boltgun and crushed the chest of the second with a blow from his elbow.

A few pulse rifle rounds flashed past him, and Stormbrow recognized that, without power armor, standing in the open was a poor tactical situation. So he did the only logical action: He ran up the open ramp of the Devilish. There, a frightened Tau pilot stood, hastily raising a pistol. A quick shot by Stormbrow blew off his head.

“Let’s rid the galaxy of this xeno heresy,” Stormbrow growled to himself. He quickly scanned the vehicle’s interior, and when he identified a fuel line snaking along the inner hull, he smashed it open with his fist. Fuel poured out—its smell not unlike that of promethium—and the Wolf Scout turned and jogged outside. A few isolated rifle shots were directed his way, but the screams of Valdar’s men striking the xeno firing line promised to distract his opponents.

Taking a few steps from the xeno vehicle, the Wolf Scout turned and fired a bolt round at the fuel-covered deck. A moment later, he was flying through the air as the Devilfish disappeared into an immense fireball.

Coming to rest on his back, the Stormgrow calmly raised his head and looked around, targeting xenos with his pistol and laughing as he fired.

While Gunnar Stormbrow destroys one Devilfish single-handedly, Brother-Sergeant Valdar and his warriors crush Tau resistance and destroy a second transport. The third escapes, despite a last-minute effort by Grimblood to toss a krak grenade at its hull.

The explosion of the first Devilfish—and the sight of the Tau firing line being slaughtered by the Space Wolves—was enough to end the Tau’s loading effort. At the second transport, a fire warrior slammed shut the rear cargo hatch and shouted to the driver, who powered up the vehicle’s engines—and the xeno craft began to move forward.

It was not soon enough. The side hull clattered as bolt round after bolt round slammed into the hull. That lulled the xenos inside into believing they were safe—that the transport’s thick hull surely would protect them from the giant Gue’la (human) warriors attacking. But they could not see Brother-Sergeant Valdar as he raced to the side of the vehicle and leaped upward, grabbing a metal strut and pulling himself to the transport’s roof.

A single thought—transmitted by his suit’s mind-impulse link—activated the mag-locks in his boots, anchoring him to the xeno craft, and Valdar pulled forth his chainsaw and drove it down into the top hull of the Devilfish. Sparks flew, and the hideous screech of blade against armor temporarily drowned out the surrounding gunfire.

In a second, Valdar had carved a small hole in the hull. Two pulse rifle shots flared upward, as the fire warrior inside desperately attempted to strike the Space Wolf.

Laughing harshly, Valdar grabbed a thermo-grenade from his belt, activated it, and dropped it into the hole. The brother-sergeant deactivated the mag-locks on his boots and leapt to safety.

The transported continued on its way for a few seconds, then a muffled explosion sounded, and flame shot out of the hole in the roof. A second later, the vehicle slewed widely to the side and, as its anti-gravity generators failed, it slammed into the ground before coming to rest in a cloud of smoke and flame.

With a grin marked by two large fangs, Valdar allowed himself  a moment of satisfaction—then rejoined the battle under way.

Grimblood realized he was panting. It was rare for his body to react to exertion, but Valdar and his warriors already were locked in combat—and Grimblood was shamed that he was late to join this fight. He pushed himself to the limit to catch up with his brothers.

He saw Valdar atop the roof of one transport moving away, and that a second vehicle burning. But a third xeno vehicle was beginning to pull away, and the Space Wolf swore he would not let it escape.

He ran toward it, targeting the pilot’s engines with his bolt gun, but the bolt rounds ricocheted off the armor. As the Devilfish gained speed, Grimblood realized he would not catch it, so he grabbed a krak grenade from his belt and aimed at the engine intake.

It was not to be. The transport shifted sideways slightly as it passed over a dip in the ground, and the grenade struck the engine cowling and bounced harmlessly away before exploding. The enraged Space Wolfe gave chase, even though he recognized the hopelessness of his effort.

It wasn’t until the Devilfish was 100 meters away that Grimblood finally came to a halt, glaring with hatred at the escaping xenos—his fangs fully extended and drool dripping down his chin. His body shook with fury and frustration.

The roar of engines and a hot wave of air marked the arrival of the Thunderhawk, which landed heavily on the plasteel highway. No sooner had the landing gear touched ground then the rear loading ramp dropped, and a seething Grimbrow and his team of warriors raced aboard, dragging their prisoners with them.

The remaining Wolves surrounded Valdar, who scanned the surrounding area with his boltgun raised and ready.

Only sporadic long-range fire targeted them. Many of the compound’s defenders were dead, and the survivors were more than content to limit their aggression to isolated shots fired at the most extreme range of their weapons. No one wished to come any closer to the Astartes.

“Time to go, Brother-Sergeant.” Looking over, Vadlar saw Stormbrow standing with his two Wolf Scouts, their sniper rifles resting on their shoulders.

Vadlar growled at him—but there was no malice in it. The brother-sergeant simply was unhappy to leave any traitors alive, no matter what his orders were.

And he wasn’t happy that a single transport had escaped him. The failure gnawed at him.

There was nothing more to do, Valdar realized. He turned and strode up the landing ramp, with Stormbrow at his side. Before they’d reached the top of the ramp, the Thunderhawk was rising off the ground—and headed to orbit.

TheGM: This was a very tiny battle—about 50 figures in all—so a blow-by-blow description of the tabletop action seemed unnecessary. To me, this battle demanded a more “narrative” approach,  a tale of adventure and daring-do. I think this series of vignettes successfully tells the tale.

As noted in Part I, this was not a one-off battle but military mission designed as a crossover event between the Corvus Cluster and the Assault on Yaisdra campaign in Great Britain.

The brainchild of GM Chris Kelley, Operation Traikai was a Tau plan to manufacture components for a Tau ground-attack aircraft (Class:AX-31 Houndshark) on Media III in the Corvus Cluster. Once completed, the components were to be shipped to Yaisdra IX in the Yaisdra Subsector, where the Tau require strong air cover as they attempt expand the Tau empire.

The Space Wolves were ordered to stop Operation Traikai, and they did what they could. In fact, they had a pretty easy time of it—any time a squad of Space Wolves can drop right into melee range of their enemy, you know it’s going to get bloody.

As it happened, the Space Wolves had great luck (or, conversely, the Tau and traitor PDF had abysmal firing rolls, as they failed to kill a single Space Marine). Ironically, the luck gods were fickle at the end: unable to do wrong for the entire game, the last Devilfish escaped them. It wasn’t for want of trying. The Marines simple finally rolled poorly:  a low row for a charge (a 1 and 2 for distance) and a failed penetration roll by a thrown krak grenade prevented a sweeping Astartes victory.

Ah, well, the Brimlock 17th Dragoons  on Yaisdra IX will just have to take comfort that there aren’t going to be as many Houndshark aircraft in the skies as there might otherwise have been.

Click here to return to Part II of the battle.

The Corvus Cluster is a Warhammer 40K blog that documents our tabletop adventures in the sci-fi universe of Games Workshop.