Quite often we’ll have some terrain sitting off board just to look nice and a large Thunderhawk would be nice to have on the table for eye candy. (Especially if there is one available and is sitting in a box somewhere.)

With the Orky Air armada growing, one of the things coming up soon is a spaceport or expeditionary runway/airport. A while back we came across this great conversion on another blog:

The Natasha’s Luck is a nice conversion from 1/72 scale to 28mm.

So here is the basic Model of the DS9 Runabout. 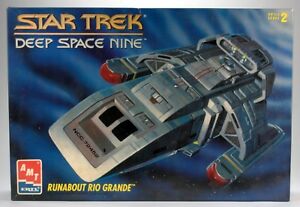 I got it at a flea market years ago and it has sat in a plastic bag for quite a while. I pulled it out of the garage and onto my worktable last night so we’ll start by putting it together this morning.

Here are the parts ready for assembly. Being an AMT model, the molds are not exact. It feels like a vacuuform rather than casting model. But I could be mistaken. 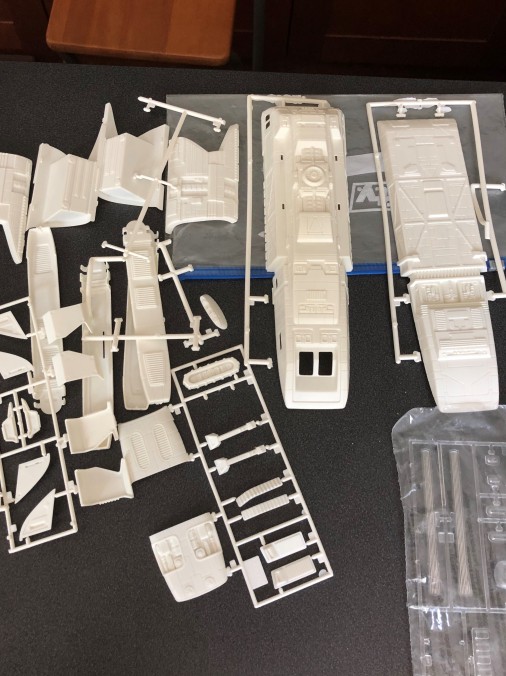 The mold lines around the window frames needed some scraping to clean them up. The plastic is pretty soft so we had to be careful not to file too hard.

We weren’t too confident in the plastic glue holding this mystery plastic, so we reinforced the windows with hot glue to make sure they didn’t pop out with handling. Since this will not be a static display model, but a piece of terrain, it will be handled fairly often. We reinforced all the individual pieces with hot glue as we assembled the shuttle.

The added benefit to the hot glue, beaded in corners that were structurally significant, was to give the model a little more weight. This will help make it less likely to shift on the table.

As with Natasha’s luck, we reversed the sweep of the nacelle struts/wings to give it a more aggressive assault shuttle look. We also mounted the nacelles inboard, closer to the hull, further adding to the aggressiveness. 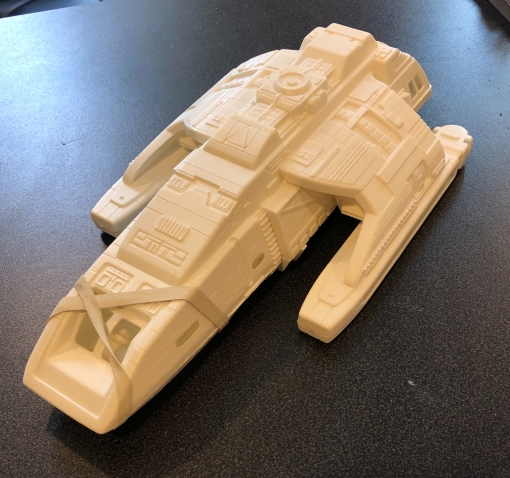 The Shuttle assembled. We’ll look for bits to make it 28mm scale.

The model comes with a sensor array mounted above the hull. Here are a few more shots of the original. 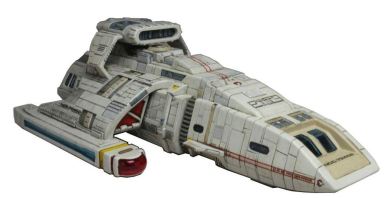 We used the top of the sensor array to add some bulk to the front, covering the windows. The exposed gubbins add a little to the 40k clunkiness. We used the array struts to bulk out the aft and nacelle struts making it a little more streamlined.

Here, we’ve added some intakes and panels to the struts and to the top-back of the model.

Next we need to add some GW bits to make it look more 28mm.  We used a variety of pieces from our bits box. Critical were the Rhino hatches and Imperial Aquilas. We also added the bottom of a Tau drone, missiles from a scout walker, lascannon power pack, and a few other small pieces. It was hard not to keep adding things. We did not want to over-do it.

DS9 Runabout tricked out for 28mm.

Next was to base coat it. Most of the terrain in the Gaffer’s set is khaki colored to contrast against the grey matt we use, so we went with GW Zandri Dust. The shuttle is on a working piece of the matt to give you an idea of the color contrast. Next up will be some washes. 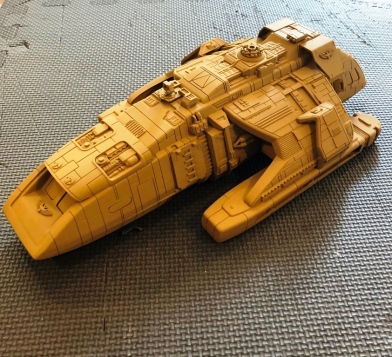 We made a simple wash with some black craft-paint, water, and dish soap. It’s pretty dark, so I had to wipe off the excess as I applied it to the model. Overall the effect is pretty good. The recesses show a little more detail.

A simple black wash brought out some of the details and gave it a weathered appearance.

It’s pretty much done at this point, but we’ll add a few colorful details to make it pop.

Added just a bit of Leadbelcher, red, and green to provide some color. Shaded the glass black.

So this is pretty much done. As we use it, we’ll add a few more details here and there. We’ll use a clear satin coat to seal it and call it a wrap!