The death of the ork warship is recorded by the Narcissus’ pict-recorders.

An Imperial patrol destroyed an ork warship in the Sculptor asteroid belt earlier today. During the lengthy battle, a Firestorm-class frigate was lost with all hands.

The Dauntless-class light cruiser, Narcissus, accompanied by the frigate, Little Victory, encountered the xeno vessel during a routine patrol of the asteroid belt. In recent years, the Imperial Navy has reported multiple ork sightings in the belt, and it is believed that orks have infested the Sculptor System’s asteroids since the xeno warship, Da Butcha, destroyed an Imperial squadron in 735.M41.—Imperial News Voxcast, 3 624 739.M41. 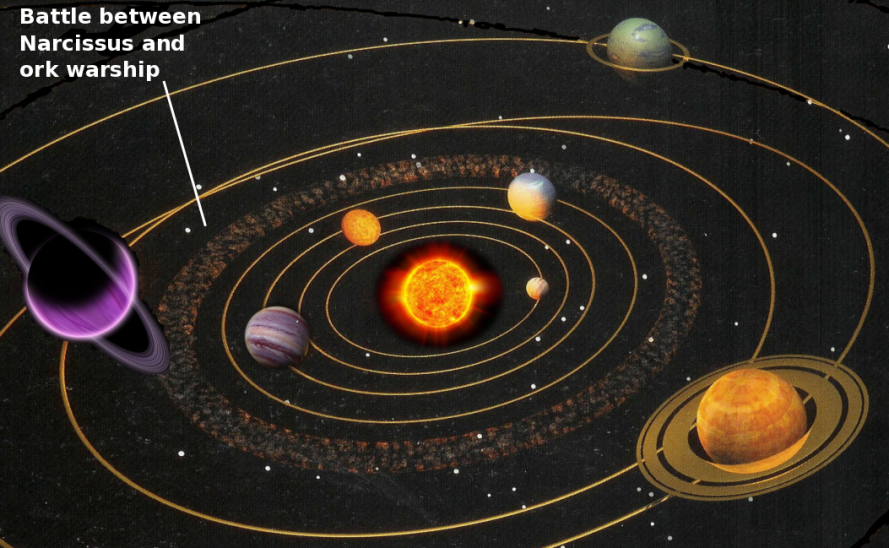 The space battle occurred on the edge of the asteroid belt in the Sculptor System,

During a routine patrol of the Sculptor asteroid field [Coordinates 09-748-92 A84 GGA3], Patrol Group Beta 7 encountered an ork warship and destroyed it.

My command consisted of the Narcissus, a Dauntless-class light cruiser, and Little Victory, a Firestorm-class frigate. The ork vessel [Classification: Kill Kroozer] first registered on ship auspices approximately 2 million miles to the bow, appearing as it cleared a clump of asteroids and moved abeam of us.

I ordered battle stations immediately. The ork vessel initially maintained its course, suggesting that it was not aware of our presence. But, as we approached weapons range, its engines suddenly flared brightly, and my navigation system reported the ship was accelerating and turning to meet us.

The Narcissus and Little Victory begin their attack run on the Kill Kroozer. Lance fire would soon erupt from their bows.

In response, I ordered All Ahead Full! and fired our lances at extreme range. With some pride, I report that both shots hit home, damaging the xeno scum.

By accelerating, the ork vessel had difficulty turning to face my patrol group, and I used this advantage to continue fire on the xenos as we closed the distance. But the ork captain appeared to recognize his mistake, and used retro engines to turn at a dangerous rate.

Alas, instead of tearing his ship apart, he managed to bring his port weapons batteries to bear and managed to strike the Narcissus. Fortunately, only minor damage was suffered.

Our acceleration allowed us to slip behind the Kroozer, and the Narcissus successfully escaped the arc of the enemy’s starboard weapons. Little Victory was not so fortunate. As it came within 10,000 kilometers of the ork ship (and just as it was about to leave the arc of the xenos’ gunsights), Little Victory was targeted with a devastating broadside that left it a dead hulk.

May the Emperor accept their heroic souls into His care.

Little Victory takes a devastating broadside from the Kill Kroozer. The Firestorm-class frigate would not survive the xeno fire.

At point-blank range, the Narcissus opened fire on the Kroozer, but the xeno ship’s shields appeared to weather our onslaught.

Having failed to destroy the Kroozer with my initial attack, and given the firepower displayed by the xeno vessel, I opted for a change of tactics. I would maintain my distance, use my superior maneuverability to avoid close enemy fire, and attempt to weaken the orks with long-range lance fire.

To that end, I began a series of maneuvers designed to put distance between myself and the xeno ship. To no surprise, the ork commander attempted to close. Using standard operating procedures as outlined in the Imperial Tactical Primer, I skirted asteroids, slipped past gas clouds, and finally ordered All Ahead Full!

The Kroozer stumbles into a dangerous asteroid field. It would suffer catastrophic damage but continue the fight undaunted by its critical condition.

Apparently frustrated by its ability to close, the ork captain followed my ship as it skirted an asteroid belt. Ordering “Hard to Starboard,” the Narcissus came within 100 kilometers of a particularly dense asteroid cluster, using the rocky mass to shield us from the approaching ork warship.

The Kroozer attempted to follow. Whether its ability to maneuver wasn’t up to the task, or the ork captain thought he could simply force passage through the asteroids, the enemy warship plowed directly through the dense field of interstellar debris.

Although sensors were unable to observe the Kroozer directly, they did register immense energy readings, suggesting the ork vessel was suffering heavily from its reckless entry into the asteroid field.

I must confess I believed the orks were doomed. To my astonishment, however, the Kroozer finally cleared the asteroid field, although long-range optics identified heavy plasma emissions escaping what appeared to be a heavily damaged hull.

At one point in the battle, Narcissus slipped into a gas cloud to confuse its ork opponent.

This pict-recording already has become an iconic symbol of Imperial greatness across the Sculptor System and is a common image published in Imperial propaganda.

Although I suspected the ork vessel was severely damaged, I was not going to fall victim to overconfidence. I stuck to my plan of a long-range engagement.

For the next few hours, our two vessels maneuvered. It proved difficult to outmaneuver the aggressive ork warship, but at least once, I managed to turn successfully at a distance and fire my prow lance and score a successful hit.

Over the course of our maneuvering, we eventually found ourselves approaching Sculptor V, the second-largest gas giant in the Sculptor System. I ordered All Ahead Full! and moved close to a small moon, known as Sculptor Vd [fifth planet, fourth moon], an uninhabited, barren world that would allow me to use its gravity well to improve my maneuverability.

At one point, the ork commander managed to outguess me, closing the distance between us as we approached the moon from different trajectories. Although not desirable, I decided to use the tactical situation as best I could. The ork ship had to be on its “last legs,” and I resolved to end the fight.

To that end, I disappeared behind the moon and, as the ork vessel swung around the other side of the moon to intercept, Narcissus brought its lance to bear. As the enemy warship appeared over the moon’s horizon, our lance shot struck home, and sensors reported massive and dangerous energy spikes in the orks’ engine room.

My attack had placed myself in the arc of the Kroozer’s port batteries, but I was prepared for that. Naval reports indicate that a Kroozer’s side batteries are not as powerful as those of the prow, so I ordered Brace for Impact!, and we survived the ork broadside with no noteworthy damage.

I was convinced the ork vessel was finished, so I took the chance to turn and deliver a broadside of my own. All port batteries opened up, and at a range of less than 100,000 kilometers, we repeatedly struck the xeno vessel. Maneuvering parallel to the ork vessel, we continued our broadsides without any response from the orks.

Despite this reassuring evidence the ork vessel was out of action, we continued our bombardment until the Kroozer was a burning hulk.

The loss of Little Victory is keenly felt. Thankfully, Narcissus is fully operational. Although there is a hull breach in Section 9A-77, adepts suggest this damage can be repaired without a return to the shipping yards. Casualties were insignificant. Only 239 low-rank crewmen, 4 petty officers, and 2 ensigns were lost.

I’m pleased to report that the Narcissus is fully operation and prepared to continue its duties on behalf of the Emperor.

TheGM: This was a small solo action designed to brush up on Battlefleet Gothic—in anticipation of a clash with The Gaffer.

It was a slapdash scenario. The two ships blunder into each other and fight. So I didn’t have to wear two hats, I pre-arranged the ork strategy: Turn toward the enemy as aggressively as possible and charge right at him. Go as fast as you can. Fire every chance you get. Don’t worry about tactics. If All Ahead Full! will get you closer, order it. Fire Retros! if necessary to turn. Don’t worry about whether it’s a good tactic. Just charge in!

Seems about right for an ork, don’t you think?

Still, I also deemed it correct that an ork crew wouldn’t be all that competent. So, I gave the ork captain a Leadership of 6. That made a difference, in the Kroozer wasn’t as maneuverability as it might have been. Yet the orks rolled above average for its orders, so, in the end, the Kroozer was damnably successful in staying on my tail.

On my end, I was curious how a long-range firing strategy would work. I didn’t find out. Although I managed a couple long-range lance strikes, what really won the fight was the orks’ inability to avoid the asteroid field. Failing to turn in time, it plowed right through the asteroids and suffered 7 damage out of 10!

That meant it only three two hits before it was out of action. But I wasn’t going to chance bad luck, so I stuck to the maneuvering for a good long-range shot. I got one.

The crisis came when I reached the table’s edge. As I was limiting myself to the table boundaries (an artificial limitation), the orks were able to close as I turned back from the edge.

Fortunately, I had seen the nearby moon, which allowed me to use it for a gravity assist and as cover. I’d just played 18 turns, and I was sick of it. So, I went for the kill.

Thankfully, it worked. My lance shot proved pathetic. I thought that would do the job, but as I feared, I rolled poorly. I did manage one hit, but the orks had the opportunity for a broadside to turn the game around.

Even more thankfully, every shot missed. I decided that was a sign. I turned for a broadside, pointed my port batteries at the ork, and rolled my die with a prayer to the Emperor. Success!