It was the middle of the night, and Captain Marcus Speakeman, intelligence chief for Fleet Corvus, rubbed his tired eyes.

Commodore Hennard was truly in rare form these days, and after receiving intelligence of the Tau incursion on Yaisdra IX, he was demanding constant intelligence reports about this threat to his flank.

The number of files that Speakeman had to read before morning was 20 centimeters high.

A young orderly approached with a dispatch. “Sir? This just arrived. Priority Beta-Alpha.”

Speakeman nodded, took the order, and began to read. Then he sighed. “Well, the old war horse will love this.”

THOUGHT FOR THE DAY: Faith grows from the barrel of a gun

Intelligence from the Yaisdra Subsector suggests Tau forces on Media III, Sculptor System, seek to ship critical but still-unidentified xeno technology out of the Sculptor System. These components may be critical to the Tau assault on Yaisdra IX and must be intercepted.

At the request of the Inquisition, a strike cruiser of the Space Wolves [Designation: Wolfborn]  has been dispatched to Sculptor System and will oversee a small-team insertion onto Media III to capture or destroy specified xeno technology.

You will cooperate fully with Astartes commander on the scene and provide whatever naval assistance requested to ensure success of mission.

Under no circumstances must this xeno shipment be permitted to leave the Sculptor System. 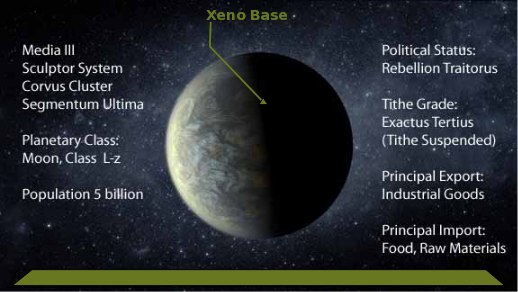 Be prepared for increased xeno naval presence in your region. Admiral Codleen of Task Force Solaris advises that intercepted xeno transmission suggests thatTau reinforcements are being directed to Sculptor System.

If Astartes mission fails, then attempt interception with naval forces, but be prepared for heavy xeno countermeasures.

Under no circumstances use overt military force on Media III, but do NOT—repeat, do NOT—allow xeno technology to leave system.

Gadea: You earned a lot of respect with your victory over the Tau last year. The stakes may be higher now.

Support the Astartes surgical strike in any way possible. But no orbital bombing; no air strike. There are attempts at creating a resistance movement on Media III, and the last thing we need is to give the Tau the propaganda coup of the Imperial Navy blasting civilian areas. May the Emperor be with you.—Hausu

TheGM: It appears that the Assault on Yaisdra IX campaign requires the assistance of Imperial forces in the Corvus Cluster. Naturally, as devoted servants of the Emperor, a covert military operation will be organized forthwith!

See how this turn of events got started on the Yaisdra campaign site: CLICK HERE.

The Corvus Cluster is a Warhammer 40K blog documenting our wargame adventures in the sci-fi universe of Games Workshop.