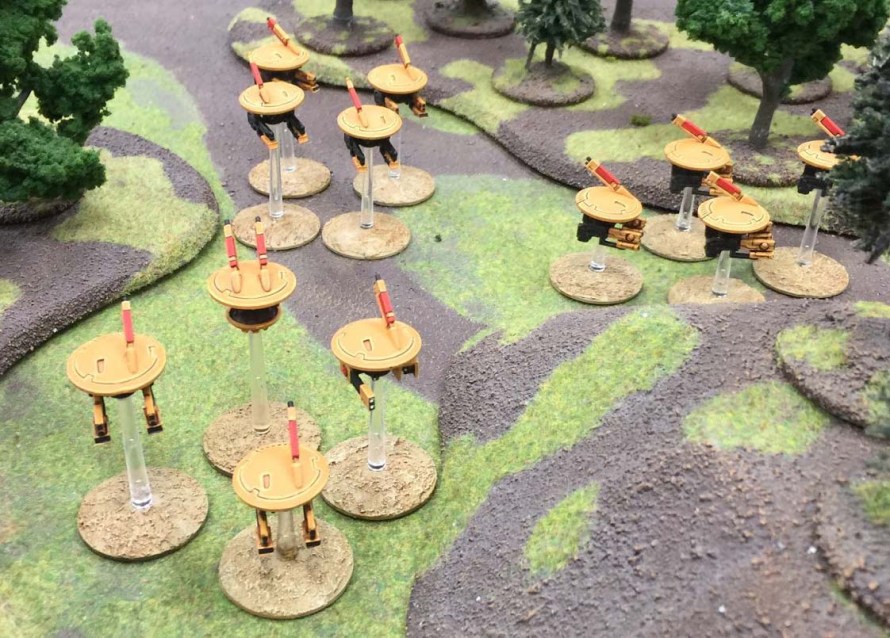 A mass of heretical xeno warrior drones advance across the countryside of Yaisdra IX to challenge Imperial rule.

Standing on the bridge of The Emperor’s Fist, Commodore Gadea Hennard scowled as he read the report handed to him by his intelligence officer.

“So the Tau are on Yaisdra IX? Where the hell is that?”

Captain Marcus Speakeman hesitated, catching himself before he foolishly reminded his temperamental superior that the subsector’s coordinates were clearly documented in the report.

“It’s on the outer fringes of the Corvus Cluster, sir, just off the galactic plane near Tau space,” he said calmly.

Hennard snorted. “Well, that narrows it down to a few thousand square light years.”

“All we know for certain is that the Tau have landed an expeditionary force on an Imperial world,” Speakeman said. “We’re not sure of the quality or number of PDF units that defend the planet, but the only Imperial regiment on the scene is the 17th Brimlock Dragoons. And they’re facing tough odds right now.”

Despite his temperament, Hennard was no fool. He quickly weighed the strategic situation. The fate of the Yaisdra IX—and, indeed, the entire subsector—would depend on the Imperial Navy. If it couldn’t get reinforcements to the planet, the Imperial defenders would be overwhelmed.

“What naval assets are in the region?”

Speakeman scanned the notes in his hand. “There’s a Task Force Solaris in the sector, led by an Admiral Codleen. I’ve got nothing on the number of ships under his command.”

Speakeman raised an eyebrow. That was high praise from the foul-tempered commodore, who looked down upon every younger man who’d passed the elderly officer in the climb up the ranks.

To help Commodore Hennard grasp the tactical situation on Yaisdra IX, his intelligence team prepared this abstracted display of the ongoing war with the Tau. The hexagonal grid is a simple way of delineating key military zones on the Imperial world.

Hennard began to pace the command deck. “I don’t like it,” he said. “The Tau are stretched thin here in the Sculptor System, so what the hell are they doing attacking another subsector? They’re dividing their forces.”

“Xenos are inscrutable, sir,” Speakeman proposed. “Who knows why they do anything?”

“That’s the kind of crap explanation they teach at the Naval Academy,” Hennard growled. “I don’t give a damn who the enemy is, the rules of war are always the same. if you want to win a fight, bring more guns than your enemy. What I’ve heard of the Tau … they know that as well as I do.”

“Then the Tau haven’t shown their true intentions,” Speakeman offered. “All we know is that they are picking a fight.”

TheGM: I’m very happy that Chris, the author of the 22nd Vostroyan Royal Rifle Regiment blog is, at least tangentially, allowing his campaign, Assault on Yaisdra IX, to “interact” with the Corvus Cluster.

No one knows how the war on Yaisdra IX may influence events in the Corvus Cluster. But to learn more, CLICK HERE to visit the campaign website.

ART CREDIT: The photo of Tau drones and campaign map are courtesy of Chris on the Assault on Yaisdra IX site.

The Corvus Cluster is a Warhammer 40K website documenting our wargaming adventures in the sci-fi universe of Games Workshop.