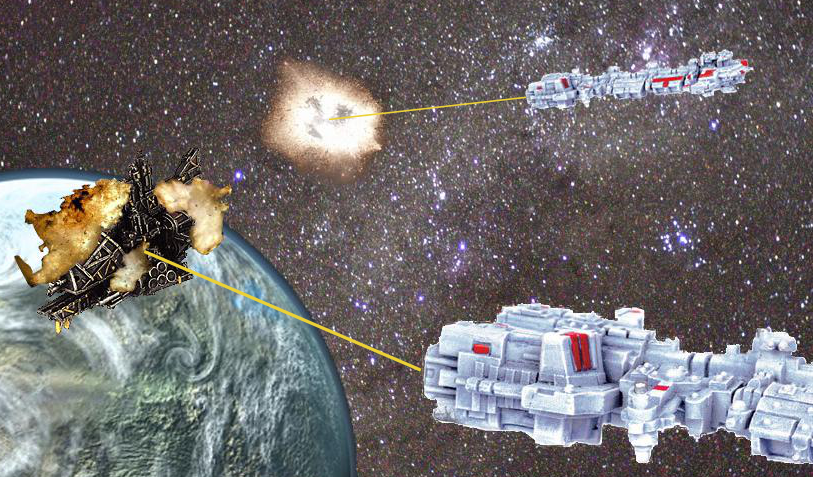 The Tau fleet devastates ork ships in orbit above Al’gel II. The victory owes much to Admiral Lightning’s decision to concentrate his forces on independent groups of enemy ships, rather than allowing the ork fleet to consolidate and fight as an organized force.

The Tau naval attack against the Be’gel (ork) fleet above Al’gel II was fought with tactical brilliance. It was a promising beginning to what would ultimately prove a horrific and sorrowful chapter in Tau military history.—”The Complete History of the Al’gel Campaign” by Aun’el Mor’kan Tal’is’ta, ethereal caste, Dal’yth Sept, (689-776.M41).

The naval campaign against the ork worlds of the Al’gel system began exactly 10 decs (15 Terran hours) after Admiral Lightning received the Tau High Council’s order to launch his attack.

The Tau admiral was supremely confident in the outcome of the initial naval attack—and with good reason. Despite the resource demands of the ongoing Arunasha Campaign (involving an ork attack of another Tau world), a sizable naval force had been gathered for the upcoming campaign.

What’s more, Lightning had extensively trained his air caste warriors in preparation for the attack, and they would be armed with the latest in earth caste technology, including the Lar’shi’vre (Protector)-class cruiser and massive Or’es El’Leath (Custodian)-class grand cruiser.

Opposing the Tau’s impressive naval force was a disorganized, ill-led fleet of crudely constructed ships of questionable technology. What’s more, it was widely assumed that the orks had no coherent contingency plan for an attack, and that each ork ship would respond independently and charge forward in an attempt to fire—or board—the closest attacking Tau ship.

Based on this assumption, Lightning initiated a plan that he hoped would allow the Tau to launch its attack with the element of surprise—and allow the Tau to concentrate its forces on isolated groups of the disorganized and poorly deployed ork fleet.

After approaching the ork fleet with the sun behind it, the Tau fleet pounced on the larger of the two orbiting groups of ork vessels.

Fleet Powerful Victory left the Dal’yth Sept on 6 617 735.M41 (Imperial date) and arrived in the Al’gel System on 6 680 735.M41 at a point approximately 10 billion kilometers from the system’s star. The insertion point was carefully selected, as it placed the star directly between the invasion force and Al’gel II, greatly reducing the likelihood that an ork detection system (if any existed) would detect the Tau arrival.

By approaching the system’s interior from behind the star, and then swinging around the star and advancing on Al’gel II with the star behind it, the Tau fleet was able to use the star’s luminosity to hide its approach. And it worked. The Tau moved to within 20 million kilometers of the orbiting ork fleet before Tau detectors identified a surge of energy readings aboard the ork fleet, indicating that the xenos finally were reacting to the Tau presence.

By then, it was too late for the orks. As the first enemy ships fired their main thrusters, a storm of gravitic-launched missiles launched by the Tau smothered the ork fleet’s single Battlekroozer and tore it apart. A second missile volley demolished two Kill Kroozers in orbit, and eight squadrons of Manta Missile Destroyers pummeled a squadron of Terror ships.

Minimizing Tau casualties was the result of the Tau fleet’s sudden maneuver across Al’gel II’s northern pole, leaving behind one group of ork ships and allowing the Tau to strike a second group in isolation.

As the surviving ork vessels attempted to maneuver and turn on the attacking Tau, Lightning threw the ork counterattack into confusion. With the broadcast of a pre-designated signal, the Tau fleet suddenly fired their maneuver thrusters at maximum power, accelerating and turning sharply away from the ork ships. The ork commanders could only bellow in outrage as the Tau fleet swung across the planet’s north pole. In seconds, the Tau ships disappeared over the planet’s horizon, their tight orbits brushing the planet’s atmosphere and lighting up the sky.

Although a difficult maneuver, this shift in trajectory served its purpose: It left the initial group of ork ships struggling to turn in response, while allowing the Tau to strike at a second conglomeration of ork ships on the opposite side of the planet—ships that were isolated and unsupported by the originally targeted ork vessels.

This second group of ork ships were just beginning to accelerate, their reaction to the Tau presence delayed by the confusion and inefficiency of the ork communications system. But it was too late: The Tau fleet appeared over the planet’s horizon on the ork fleet’s flank and pounced.

The two ork fleets finally concentrated their forces, but it was too late–heavy casualties had cost them any chance of victory. The more clever-minded of the green beasts fled to the system’s outer reaches.

The rear ork Kill Kroozer, later identified as Da Wacka, was hit first. As with most ork ships, Da Wacka was heavily armored in its prow but vulnerable to its stern. Two gravitic-launched torpedoes and six railgun batteries smothered the ork ship’s stern and tore open her hull. Its plasma core breached, the ship exploded in a ball of super-hot plasma that consumed a nearby Terror Ship.

Six more ork ships were destroyed before the ork vessels from the other side of the planet finally rejoined the fight, having completed their turns and circled around the planet. By this point, however, two-thirds of the overall ork fleet was destroyed, and the outcome of the fight was no longer in doubt.

At this point, the ork ships split into two groups. The largest assembly accelerated toward the Tau, the orks’ eagerness for war overwhelming any rational consideration of the tactical futility of further combat.

A smaller contingent, clearly captained by slightly more cunning commanders, recognized the suicidal nature of the situation and disengaged, fleeing toward the outer planets. Given the threat of the attacking ships, an organized pursuit by the Tau was impossible.

Although a Tau victory was inevitable at this point, Tau casualties were mounting. One Kass’l (Orca)-Class ship and two Manta destroyers already had been destroyed during the engagement, and a critical emergency soon arose as the ork’s final Kill Kroozer and two Terror Ships turned on a collision course with Tau fleet’s command vessel, Lighting’s A’rho.

For the Tau, this was the major crisis of the battle. The loss of their grand cruiser would seriously weaken the ground support available for the invasion—and add to the challenges of maintaining a blockade around the ork-held world—but there was no time to maneuver the grand cruiser to safety. Thus Lightning had no choice but to turn the A’rho directly at the Kill Kroozer, ordering all nearby ships to form around him and open fire with every weapons system available.

The surrounding space soon lit up as ion beams, rail guns, and torpedoes tore through the vacuum between the lines of opposing ships. The attacking ork ships took tremendous damage, and the two Terror Ships were soon destroyed, while the A’rho suffered crippling blows to its port ion and railgun batteries.

Despite the firepower targeted against it, the ork Kill Kroozer continued forward, straight at the A’rho. It was obvious the orks intended to ram the Tau ship, although whether it’s intent was to ram, board, or sweep the vessel with point-blank fire was never determined.

Lightning ordered his ship to turn—then suddenly cancelled the order. Officers on the Tau bridge waited in stunned silence as Lightning stood silent, contemplating his course of action, then the Tau admiral ordered the grand cruiser to maintain its collision course—and then quickly laid out his plan for a last-minute maneuver reminiscent of a fighter craft turn designed to throw off heat-seeking missiles.

At a distance of only 20,000 kilometers, Lightning ordered the maneuver. Given the ship’s bulk, it was impossible to actually shift the grand cruiser’s trajectory more than a few hundred  yards before the ships closed, but by firing maximum thrust, and turning the ship 75 degrees along its Y axis, the A’rho managed to shift 5 kilometers past the approaching ork prow and slide past—a paper-thin margin by any standards of void warfare.

Once past the ork’s prow, the damaged A’rho was safe, and the Tau fleet descended upon the Kill Kroozer like a pack of Fenrisian wolves. Finally, a salvo of torpedoes breached the Kill Kroozer’s hull in a dozen places, and the ork ship was a dead hulk.

Twenty-two of 28 ork ships—95 percent of the ork fleet’s total tonnage–was destroyed in the naval battle, at a cost to a Lar’shi (Hero)-Class Cruiser and two Kass’l (Orca)-Class Gunships. Several ships suffered damage, with the A’rho hardest hit, with the loss of its port ion cannon and damage to its port railgun battery.

It was, given the ferocity of the foe, a significant tactical victory, with its strategic success marred only by the escape of a five ork ships. Although these xeno vessels would harass the Tau in the months ahead, they were too few to dispute the initial Tau landings on Al’gel II, which began the next day.

TheGM—This is the first of what will be occasional blog entries detailing the “history” of the Corvus Cluster.

While essentially fiction masquerading as historical writing, this “history” is offered up  for a simple reason: I have a Tau 40K army and Battlefleet Gothic fleet, and the Gaffer has an ork army and fleet. But, given the limited time we have to game, we simply cannot keep adding new campaigns to the Corvus Cluster without consideration of our limited time for gaming.

Thus the Al’gel campaign. As time won’t allow us to fight every battle, I shall fictionalize elements of the military campaign–for my own creative enjoyment and as a context for the occasional tabletop battle. When we do choose to fight an ork-Tau battle, we’ll come up with a rationale that will somehow affect the overall campaign and the result will influence future chapters of this fictional war.

In other words, now the the Tau has cleared the skies over Al’gel II, it might be time to fight a Planet Strike scenario. Or maybe I’ll keep making up what happens in the campaign, and in a month, we’ll do a scenario involving a big fight as the Tau seek to breakout of their landing zone. If they fail, the Tau are penned in. If they succeed, then the orks will be on the defensive.

As always, time will tell….