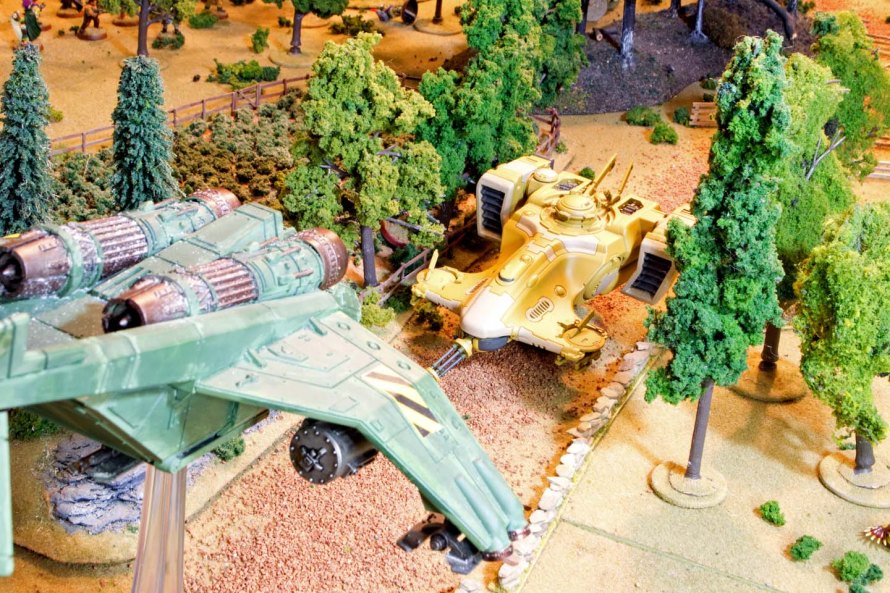 To the surprise of the Tau, a Valkyrie swoops down and cuts off the Devilfish’s escape. A greater surprise awaited the xenos when they discovered the ship’s cargo. 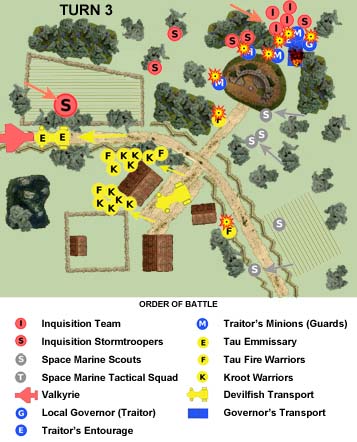 TURN THREE: It took little effort to mop up the human traitors. My stormtroopers quickly eliminated the remainder of Cierza’s militiamen, while Cierza put up only token resistance—the traitor was dazed but largely unharmed as he stumbled out of the ruins of his transport.

The main action now shifted to the capture of the Tau Emissaries. Their Devilfish now was gaining velocity as it roared down the dirt road that led away from the farm, but our Valkyrie swooped down and blocked the path, opening up with its nose-mounted las cannon and wing-mounted missile bays.

The Valkyrie’s fire control was abysmal, with the vessel failing to hit the Devilfish. To stop the Devilfish from escaping, Brother-Sergeant Quintas, commander of the Space Marine tactical squad, ordered it to land on the road and physically block the xeno craft’s path.

As the Devilish braked to avoid a collision, one of our Sentinels—hidden in the woods—broke free from the tree line and marched forward, blasting away with its autocannon. The Tau suddenly found themselves in a very precarious tactical position.

The Tau position wasn’t entirely lost. Although two Fire Warriors were killed as they tried to delay the Space Marine Scouts, the Kroot were racing forward to bring their firepower against the Vakyrie. 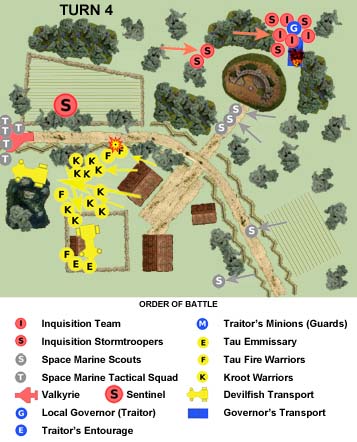 TURN FOUR: With the approaching Kroot joining the fight, the Tau might have had a chance of escaping. But, no doubt to the dismay of the xenos, the Valkyrie’s exit hatches opened, and the Knights of Altair—a tactical squad in full combat armor—disembarked, their bolt guns at the ready. The Emperor’s retribution was at hand.

It was at this point I must give the xeno commander credit. For a variety of reasons, the Tau Devilish could not simply leap over the surrounding terrain and race to the horizon. It was stymied in its escape.

But, in a brilliant response to its sudden vulnerability, the Tau vehicle careened to the south and rushed away as far as it could, coming to rest inside a cattle stockade near the farm. One of its turbines apparently damaged by Iimperial fire, the transport landed hard, and the Emissaries and their escort disembarked with the intent to run for the woods (off map).

Such an escape required, however, that the nearby Space Marines be slowed. The Tau’s second Devilfish charged forward and landed directly in front of the tactical squad, using its armored bulk as an obstacle. At the same time, the Kroot raced toward the Space Marines, the creatures offering a rasping wail of avian squawks in challenge.

At this point, I must confess there was a likelihood that the Tau Emissaries could escape. But, as you’ll note on the accompanying map, one Space Marine Scout was heading in the direction of the Tau’s retreat along the southern edge of the neighboring farm. He would play a critical role in the minutes ahead.

Meanwhile, the Valkyrie and Sentinel continued laying down heavy fire, tearing off pieces of the escaping Devilfish’s armor and ripping one Tau Fire Warrior into a bloody and shredded corpse. It is this fire that apparently damaged the escaping Devilish and allowed the fortuitous turn of events to follow.

In a desperate bid to stop the Tau escape, the Valkyrie pilot sacrifices himself to put a wall of burning armor between the Emissaries and their escape.

TURN FIVE: As the Tau Devilfish settled to the ground and the Emissaries disembarked, Brother-Sargeant Quintas recognized that the Tau were only seconds from making their escape. With little time to act, he responded with his own unorthodox tactic: He ordered the Valkyrie to crash-land in front of the Tau Emissaries and block their path.

The pilot, at first, protested, but no mortal man easily defies a Space Marine. With a voice of thunder and the full authority of the Emperor echoing in his every word, Brother-Sergeant Quintas repeated the order. To his credit, the pilot acquiesced and, as important, performed his duties with dedication, slamming his ship into the ground only meters from the Tau Emissaries and knocking them to the ground.

(The pilot was killed, while the two craft’s gunners suffered minor injuries. Nevertheless, as you ordered the Inquisition’s role kept secret in this matter, both were executed, as their injuries required an immediate medical evacuation, and there was no time to conduct the standard brain-wipe.)

The Kroot attempt to delay the Knights of Altair. They succeeded, but there was never any doubt as to the outcome of the fight. The Space Marines slaughtered the xeno warriors with no difficulty at all.

As this drama unfolded, the Knights of Altair roared forward, determined to join the race to cut off the xeno prize. The Tau opposition was futile. One Marine placed a krak grenade in the turbine of the Devilish that was using its frame to block the Marine advance. The transport was torn in half.

Seconds later, both Kroot and Space Marine leapt upon one another, fighting amongst the flames and wreckage of the xeno vessel. The Kroots’ powerful avian claws, sharp enough to tear a man in half, proved useless against the combat armor of a Space Marine. With boltgun, chainsword, and armored fist, the Knights quickly put an end to the xeno opposition.

Not a single xeno survived.

Meanwhile, the Sentinel continued firing its autocannon at point-blank range, putting an end to the Fire Warriors directing the battle. And, to the south, the most isolated—yet critical—blow was struck. Wielding a missile launcher, one of the Space Marine Scouts took a desperate shot at the Tau Emissaries as they prepared to make their escape.

I know, my Lady, that you wished the Tau Emissaries captured, but I cannot help but feel the Space Marine’s tactical decision was correct. As it was later to prove, the tactical squad was fatally delayed in their attempt to cut off the Tau withdrawal. The Scout’s missile fire did not stop this escape, but it proved a crucial blow, killing the main Tau Emissary.

Click here to return to Part 1 of the battle.