By late afternoon, the tortured attack by 2nd Armored Co. through the wooded underbrush had run out of steam. Many vehicles were bogged down, and without infantry cover, Tau Fire Warriors were taking their toll using anti-vehicle weaponry.

Despite the daunting challenges, 2nd Armored Co. was close to snatching victory away from the xenos. Although more and more tanks were immobilized, the immense firepower of the remaining tanks devastated Tau resistance and drove the xenos out of the forest. Kroot warriors, however, used their skills as forest fighters and sidestepped the Imperial attack, and attempted to cross into the Imperial line under heavy mortar fire.

While Imperial forces consolidated on the left flank, B Co. came close to overrunning the Tau command center. Desperate hand-to-hand fighting ensued, and despite the xeno’s reputation as poor close-in fighters, the xenos managed to put up a stout resistance. Alas, fast-moving Tau Crisis Suits, powering up their jet packs for quick redeployment, arrived to save the Tau HQ at the last minute. 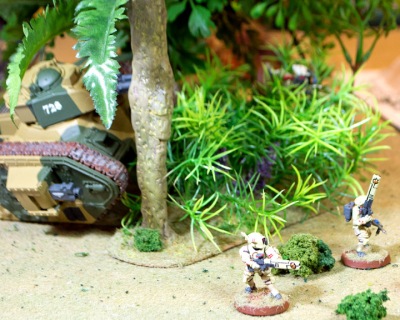 The Imperial Guard’s armored attack ultimately was immobilized by the jungle’s heavy growth, but it was successful in driving the Tau back.

By the end of the day, exhausted troops in both armies began a gradual withdrawal to the safety of their lines. Infantry and recovery crews entered the western forces to recover 2nd Armored Co.’s tanks. With their powerful battle cannon still dominating the area, the Imperial tanks were left unmolested by the Tau as they withdrew.

Meanwhile Kroot auxiliary troops, who earlier had threatened to break the Imperial line, withdrew as well, an ongoing bombardment by Imperial artillery–coupled with the presence of Imperial armor to their rear–an adequate deterrent to continuing their attack.

The last combat action was in the center of the battle line, where B. Co. had nearly broken the Tau line. As successive waves of Tau reinforcements arrived, the Imperial breakthrough was stopped, then whittled down. Only a few Imperial Guard managed to fall back to friendly lines.

As darkness fell over the battlefield, both forces had withdraw to their initial deployment zones–although neither side appeared ready to yield the battlefield. Another fight was inevitable.

FromGM: The battlefield was tactically challenging. Thick forest to the west, a narrow “kill zone” between the villages, and woods dividing the center of the battlefield severely limited lines of fire for both “shooting armies” and gave the opposing military commanders some distress about how to deploy–and fight–this battle.

B Co. makes a desperate attack on the Tau command post. Although unsuccessful, the Imperial thrust forced the xenos to respond with their most maneuverable unit–their Crisis Suits–and this redeployment fatally undermined the Tau’s attack on Malati.

The Tau attack to the west was concentrated and dangerous, but the Imperial response was aggressive. Despite being outnumbered, the Imperial’s audacity in charging forced the Tau on the defensive and was decisive in denying the xenos any hope of victory. Indeed, the Imperium’s initiative almost won the day.

It is worth noting that the game was hanging in balance to the last turn, when just three die rolls determined the final score. Imperial mortars struck at the Kroot, but all three shots landed on the same single Kroot figure. A greater spread of this bombardment might have forced a morale check and denied the Tau control of the northwest objective.

The second key die roll involved the Tau fire warriors holding the western objective in the forest: Forced into a morale check by armor fire from the forest, a successful Leadership check would have allowed the Tau to hold the objective and win. (They fled.)

Finally, if the Cadians in the center had failed their morale check, they would not have earned a victory point for being in the Tau deployment zone.

End result was a draw. The Kroot objective, along with the First Blood objective, earned the Tau two victory points. The Imperial forces held the abandoned Lemon Russ to the south, and were in the Tau deployment zone. The game ended 2-2.

STRATEGIC RESULT: Both the Imperium and Tau have invested their military assets at Malati, so–although it is now the Imperial strategic turn in the Dar Sai campaign–Captain Stark has no choice but to launch a counterattack and force the Tau to retreat back to the Hanui Valley. So a Second Battle of Malati is inevitable.

Click here to read the Part 1 of this battle.