Rumors of Tau emissaries on Hegira were widespread before Imperial authorities stumbled upon a xeno military presence in the Hanui Valley in 735.M41. Several military actions followed as first PDF, and later Imperial Guard, forces attempted to eliminate the threat.

This simple node campaign will determine the fate of Dar Sai. 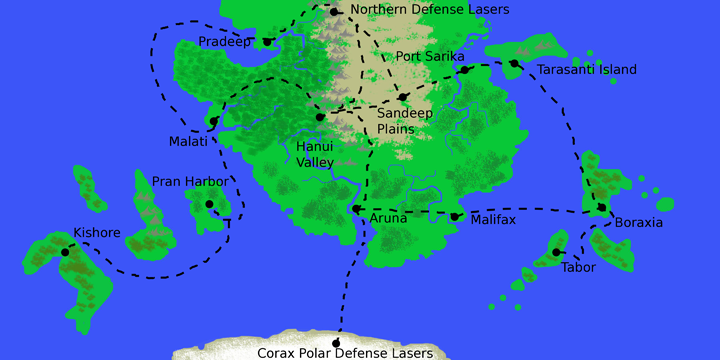 Imperial vs. Tau. (Other forces may make an appearance for their own nefarious reasons.)

Conquer every node (territory) on the campaign map—and take control of Hegira.

As the campaign begins, the Tau are in control of the Hanui Valley. The Imperium controls all other territories, although if any territory’s loyalty falls to 50 percent, it is “contested” and considered neutral.  Control is maintained if a military faction was the last to occupy the area.

Movement is always along the paths between territories. Thus a territory can only be attacked if an opposing faction controls a territory with a direct path to the target territory.

It is assumed that each territory has occupying troops and reserves can be easily transported. Thus players need not concern themselves with such details. An appropriate-sized army will always be available to defend–or attack.

Exception: If either military faction has orbital superiority (see below), they may launch an orbital assault on any territory on the planet–even those that are not adjacent to a friendly controlled territory. Rules for orbital assaults are below. 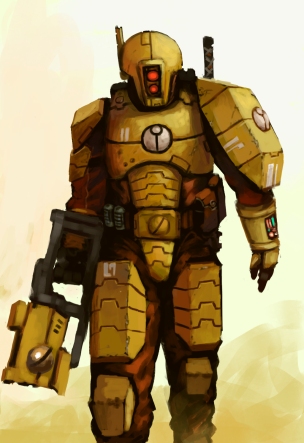 Each turn, the Tau commander will choose an enemy-held territory to attack. The territory must be accessible from an adjacent territory with a path connecting the two–or through an orbital assault (rules below).

After that battle is resolved, the Imperial player may choose a territory to attack (it may be a territory he must lost) or he can seek to influence the Loyalty rating of one territory. (See Imperial Loyalty rules below.)

Once both players have completed their actions, a new turn is played.

Once an attack is declared, both players read the description for that territory, as listed below. In most  cases, battles will be determined exactly as per the Warhammer 40K rulebook. However, in some territories, special rules apply for terrain or types of battle.

If both players agree, they may replace a randomly selected battle with a scenario of their own choosing or design.

Some territories offer benefits if conquered. These are listed in the descriptions of each territory.

At times, the GM may allow unexpected events, such as unanticipated dust storms, to occur. It also may be possible for forces—at times—to receive reinforcements or attack non-adjacent territories (a new xeno force appears or Space Marines land by drop pod behind enemy lines).

(This is entirely at the GM’s discretion, although he is influenced by clever ideas and cash gifts.)

Control of space above Dar Sai provides the ability to launch an orbital assault anywhere on the planet–an exception to the movement rules above. To do so, however, a military faction must have orbital superiority–in other words, have forced all opposing ships out of Dar Sai’s orbit.

At the beginning of each turn–before initiative is determined–the Tau and Imperial Naval Commanders will allocate a portion of their naval forces in the Sculptor System to the orbit of Dar Sai.

Once these forces are determined, either faction may declare an attack on the other. This attack must be ordered before ground movement–or orbital assaults–are declared.

If an attack is ordered, a Battlefleet Gothic battle is fought. The loser withdraws any surviving ships from orbit, granting the winner orbital superiority.

If neither side attacks, both naval forces are assumed to be on station–observing their opponent’s forces–but maintaining an uneasy peace. In this situation, orbital assaults are not permitted.

If one military faction has orbital superiority, it may launch an orbital assault. An orbital assault may be played using any Games Workshop scenario designed for such assaults–or it can be assumed the assault was not contested–although local defensive forces will still contest the territory by fighting a standard scenario from the Warhammer 40K rulebook or territory-specific rules.

Note that if an orbital assault is launched–and the opposing military faction controls the defense lasers in that hemisphere (north or south)–then a d6 is rolled. On a 4+, one unit participating in the orbital assault (determine randomly) is destroyed. Thus is the price of a bold attack against a well-defended planet.

The Tau player has a member of the water caste working covertly to convert the populace to the Greater Good. To reflect this, each turn, the Tau may select a region and roll a d6. On a 4-6, the region’s Imperial Loyalty falls 10 percent. On a 1,roll a d6:

3-5–Emissary is put at risk. Play a skirmish scenario to determine the emissary’s fate–or kill on a roll of 4-6 on d6.

If a region falls below 50 percent loyalty, it is no longer controlled by the Imperium and cannot defend itself. Tau forces may move through the region at no cost (thus moving on to the next region) and also assume control of the region. If an orbital assault is launched at the region, there is no battle fought–and the region becomes Tau owned.

In lieu of a battle in their turn, the Imperium may enter any region where the loyal has fallen below 50 percent (but not Tau controlled) and immediately raise the Imperial Loyalty to 70 percent–through massive purges and executions of suspected traitors.

ARUNA--Lining both sides of the River Tabor is a vast acreage of farmland dedicated to producing the foodstuffs that are essential to maintain the economy of Belzagor (Sculptor IV).

Terrain: Significant areas of cropland, lined by trees, with some farm buildings.

Terrain: Roll d6. On 1-3, there are signficant areas of cropland, small copses of trees, and farm buildings. On 4-6, 50 percent of terrain is jungle.

CORAX POLAR DEFENSE LASERS–This barren arctic region is home to the dreaded Corax Ice Serpent. A translucent crystiline lifeform that bears a resemblance to a snake made of ice, the Ice Serpeant is powerful enough to crush a Lemon Russ Battle Tank.

Mission#1: Before the defense lasers can be seized, the surrounding territory must be conquered. Standard selection from the Warhammer 40K rulebook.

Mission #2: Once the surrounding territory is conquered, an attack must be made on the defensive line surrounding the military base. Choose an assault-style mission from the Warhammer 40K rulebook or Stronghold Assault supplement.If a standard 40K mission is selected, the defender must allocate 25 percent of his army points to defensive terrain.

Terrain: Same as Mission #1, along with defensive terrain as explained by Mission #2.

Special Rule: Roll a d6 at the beginning of each player’s turn. On a 6, the player may place a Corax Ice Serpent (or available”monster”) along any table edge, but at least 12″ from any opposing unit. The monster will move at full speed toward the nearest unit of either player–and attack if possible. The monster stays on the table until killed.

Special Rule: Any political faction controlling this facility may fire upon enemy forces attempting an orbital strike in the southern hemisphere of the planet.

KISHORE–Another of the planet’s great plantations dedicated to agricultural production.

MALATI--This huge plantation supplements its income from mines that extract Rare Earth minerals of unusual purity. As such, Malati boasts the only significant manufactorum on the planet.

Mission: Standard selection from the Warhammer 40K rulebook or, if manufactorum is rolled below, from City of Death supplement.

Special Rule: Control of this region allows the owner to win future first-turn rolls in the cmapaign on a 5-6 on d6.

MALIFAX–The only real city of Dar Sai, Malifax serves as the capital of the Imperial government. As the rural aristocracy is wary of urban growth (and the greater risk of civil unrest), the planetary government has never invested in city services. So, besides a few government buildings in the city center, the vast majority of Malifax is a wretched shanty town without water, sewerage, medical, or law enforcement services.

Mission: Select a mission from the City of Death rulebook.

Special Rule: Control of this region by the Tau grants the Tau army one 20-man conscript unit of Gue’vesa (human allies) at no cost per battle.

NORTHERN DEFENSE LASERS–Located atop the tallest mountain on the planet, this area is a grim, lifeless region–save for the PDF garrison that mans the gigantic lascannons that can destroy orbiting ships.

Mission#1: Before the defense lasers can be seized, the surrounding territory must be conquered. Standard selection from the Warhammer 40K rulebook.

Terrain: A barren wasteland of rock croppings, escarpments, and other mountainous terrain pieces.

Mission #2: Once the surrounding territory is conquered, an attack must be made on the defensive line surrounding the military base. Choose an assault-style mission from the Warhammer 40K rulebook or Stronghold Assault supplement.If a standard 40K mission is selected, the defender must allocate 25 percent of his army points to defensive terrain.

Terrain: Same as Mission #1, along with defensive terrain as explained by Mission #2.

Special Rule: At the beginning of the campaign, this position is neutral because of political intrigue (not under the control of either Tau or Imperium). Thus the giant lascannons will not target any orbital assaults. Should the position fall to either political faction, then

Special Rule: Any political faction controlling this facility may fire upon enemy forces attempting an orbital strike in the northern hemisphere of the planet.

PRADEEP–Originally founded by an order of the Echalary, this region is noted for its citizens puritan views on the Imperial Cult. of the Imperial Creed. Thus this area has strong anti-xeno biases.

Special Rule: In any battle fought in this region, the Imperial Guard receives a 20-man conscript force to its army at no cost.

PRAN HARBOR–One of the wealthiest plantations on the planet, with a progressive aristocratic ruling family, Pran Harbor is a symbol of what Dar Sai could be–if only other aristocratic families had any concern for the teeming millions working their fields.

Mission: Standard selection from the Warhammer 40K rulebook or City of Death supplement.

SANDEEP PLAINS–Arid scrubland, this region is marked by small ranches raising livestock. The land is relatively poor and undeveloped, and unlike much of the planet, there is no ruling aristocracy–instead, most of the land is divided into small homesteads owned by families who are, compared to most of the populace, relatively free to determine their own destinies.

TABOR--The newest plantation–only two centuries old–has made little dent in clearing the fetid jungles of the island. The populace is wretchedly poor and backward, little more than slaves living short and brutal lives at the hands of cruel masters.

Special Rule: In any battles fought in this region, the Tau receives one 20-man conscript unit of Gue’vesa (human allies) for free.

TARASAND ISLAND: Nearly half the island has been converted to farmland, with most laborers living in simple, basic huts without modern conveniences.

Terrain: Significant areas of cropland, lined by trees, with some farm buildings.