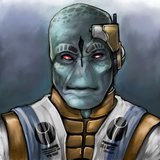 Kor’o Che’lei is a distinguished and veteran naval commander of many years’ service to the Greater Good. In 735.M41, he was named kor’o (admiral) of the Kor’vattra Or’es Shi (Fleet Powerful Victory) that spearheaded the invasion of the ork-occupied Al’gel System.

Che’lei was born to the air caste on To’pa, a planetoid and minor Kor’vattra (naval) base in the Vash’ya Sept. Little is known of his early life, but he attended the prestigious naval academy at Tau’n and was commissioned an officer in 703.M41.

By this time, the Second Sphere Expansion was nearing its end, and the general consensus among the Tau was that major military operations were coming to an end and a period of peaceful consolidation would mark the immediate future. Che’lei dreaded what he foresaw as an unexciting and undistinguished naval career–focused mainly on patrol and convoy duty.

His concerns were unfounded. The galaxy is an immensely dangerous place, and while the Tau had greatly expanded their empire, they also had brought themselves into proximity with new and dangerous xeno adversaries. Che’lei would spend the rest of his career in an endless, if not relentless, series of military actions:

* Friendship of the Thurm (705.M41)–While an ensign aboard an Kass’L (Orca)-class gunship, Che’lei participated in a boarding action against Be’gel (ork) raiders. Responding to a distress call from a Demiurg mining ship, a Tau flotilla discovered two Kill Kroozers and a variety of smaller ships–two of which had rammed the Demiurg vessel and sent aboard raiding parties. While the larger Tau vessels attacked the ork fleet, Che’lei’s gunship docked with the Demiurg vessel and disembarked its entire crew as a boarding party.

The diminutive Air Caste naval personnel were no match against the ork warriors, until Che’lei offered the insight that a zero-gravity environment would put the orks at a serious disadvantage. That proved the case. Once the vessel’s gravity field was shut down, the orks could not engage the more maneuverable air caste crewmen in melee, but the Tau could bring superior firepower against the orks.

The Tau fleet severely mauled the ork fleet, which withdrew, and the Tau and Demiurg eventually–but at great cost–wiped out the ork boarding party. For his quick thinking, Che’lei won his first of many commendations. In appreciation for his services, Che’lei was formally adopted as a member of the Brotherhood of Thurm, an influential social clan of Demiurg society.

* Arachen Incursion (723-727.M41)–In command of a Kir-Qath (Defender)-class Escort, Che’lei was part of a squadron of escorts that operated deep in Arachen-held space. For four years, the squadron attacked the convoys–or raided planets–of this hostile insectoid species, seeking to disrupt supply lines to the front lines of battle.

Several times, the squadron’s ships separated, operating independently so that the Arachens could not discern how many Tau ships were within their space–and forcing the Arachens to deploy warships in pursuit that would be of greater value on the front lines. During this period, Che’lei was credited with destroyed 13 cargo ships, four enemy escorts, and two orbital stations.

* Arkunasha War (circa 728.M41)--The exact date of this war is unavailable, but Che’lei is believed to have captained a Lar’shi’vre (Custodian)-class Cruiser during this military action against an ork invasion. Che’lei won renown for destroying two Kill Kroozers that attempted to attack an orbiting convey transporting three senior members of the Ethereal Caste.

It is common in Tau society to award successful military leaders with honorific titles–often surprisingly informal. Because his tactics often have focused on maneuver–and striking unexpectedly with great speed–Che’lei is now commonly referred to as Admiral Lightning–a word play on his name, the pronunciation of which is synonymous to the Tau word for the atmospheric electrical discharge. It is an apt description of how the admiral fights.