The campaign began on the first day of 735.M41, and by 012.735, we already have seen the strategic situation shift in the Scupltor System: 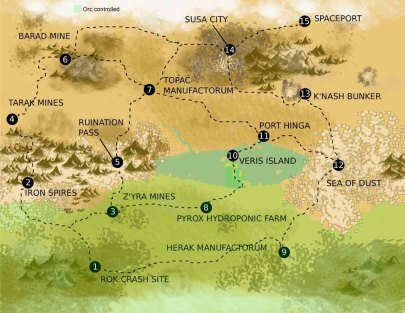 Map of Hegira, with ork-controlled areas highlighted in green.

Two years ago, an ork Rok crashed on Hegira (fourth moon of Sculptor II) and, since then, the orks have spread across most of the southern continent, killing or enslaving the citizenry. On the untouched northern continent, Imperial authorities have mobilized the Planetary Defense Force (PDF) and militias and have begun entrenching against the inevitable attack by the green-skinned xenos.

The most recent events on this world been two key battles on Veris Island, one of a string of islands that exist on the Byrgius Sea, the only significant water body on the arid Mars-like moon.

The first battle, Clash on Veris Island, brought to Imperial attention the ork warboss, the self-styled “Kapitan” Rumlar. Fighting inside a Killer Kan–a mockery of an Imperial  walker–Rumlar attacked a PDF force that was patrolling the evacuated island. The battle was a draw, although Imperial propaganda declared it a victory.

A second battle took place two weeks later when orks under a different leader attacked the PDF again. This battle, The Fall of Veris Island, saw the PDF mauled and nearly destroyed, its commander, Lt. Serio Calius, executed on the battlefield for his failure by a commissar-major.

The strategic situation is grim. Looking at the campaign post, The Hegira Campaign, Veris Island is a valuable staging area for the orks if they hope to seize PortHinga and invade the northern continent.

The Kroot charge PDF troops on Dar Sai–just before the xenos aree mowed down.

To the consternation of Imperial authorities, Tau military forces have been identified on Dar Sai, the second satellite of Sculptor III.

This xeno intrusion onto another Imperial world has long been feared since the government of Media III, a sister moon of Dar Sai, turned traitor three years ago and swore allegiance to the Tau Empire.

According to a military bulletin released yesterday, the 2nd regiment of the Dar Sai PDF clashed with a equal-sized force of Tau in the Hanui Valley, a key agricultural region of the sparsely populated moon. (See PDF defeat Tau on Dar Sai.)

Since the loss of Media III, it’s been widely speculated that the Imperial Navy would soon arrive to drive the Tau from the Sculptor System. And authorities insist that military action is imminent.

But, after three years, public opinion has shifted, with many believing that military resources have been deployed to more pressing regions of the Corvus Cluster–and the Sculptor System is on its own.

That popular view–strongly condemned by authorities–is supported by the increased frequency of Tau naval vessels being observed in the system. Just last month, eight different sightings were reported, suggesting that as many as 20 Tau ships may be deployed around Media III.

The reality is that the Tau naval commander, Kor’el Dal’ta’ai, has attempted to confuse Imperial forces by having his ships travel extensively along the edges of Imperial-held space–to be seen and convince the Imperial Navy that the Tau presence is larger than it is.

And that deception is working. The number of reports of xeno ships has  caused Imperial concerns that the shipping lanes to Dar Sai may be cut off at some future date. That would be considered an alarming turn of events, as Dar Sai is a key agricultural world in the system and supplies a significant amount of food stock to the arid mining world of Hegira and the malnourished mass of workers on Belzagor (Scuptor IV).

Some Imperial scholars suggest Dar Sai is a prime target for the Tau.

“The moon’s proximity to Medea III, along with its relative isolation in the face of the Tau navy, makes it a natural ‘next step’ in the xenos treacherous plan for expansion,” says Loki Barad, a scholar of Imperial naval strategy at the Schola Progenium of Belzagor. “What’s more, the populace is largely uneducated and, as a backwater world, the Ecclesiarchy has a limited presence on the world. Thus these simple Imperial citizens are vulnerable to the lies of the xenos.”

Imperial Praetor Justinian Hypatia has warned the populace to avoid seditious speculation concerning the xeno threat and trust that Imperial authorities will soon wipe out the Tau presence. An Imperial naval vessel, he says, already has been ordered to the moon’s orbit to make clear that the Imperium will not tolerate any future incursions into Imperial space.

[It may be a  sign of things to come that that the only nearby Inquisitor, Serillian, has submitted a report to her superiors that says: Praetor Hypatia is wise to stamp down on speculation about the Tau before it leads to more rumors, fears, and civil disorder. The decision to send an Imperial frigate to the moon is more chancy. It may prove a political stroke of genius if it keeps the Tau guessing. It could, however, provoke a military response that, with our military forces widely dispersed, we are unable to counter. It’s a bluff. Let’s hope it works.”

The world of Prysmos in the Eudoxos System has escaped the radioactive dust cloud that it entered milllenia ago, and now there is concern that privateers and other parties may attempt to exploit whatever technology and wealth has survived the passing years. We can expect more reports of “incidents” upon this world.