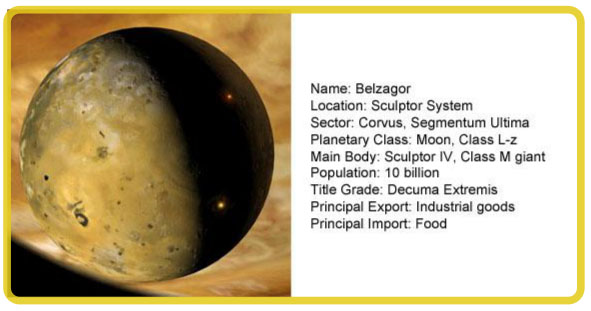 Balzagor is an Imperial Hive World, a satellite of the gas giant designated as Sculptor IV. The moon’s ancient manufactorum, whose origins date back to the Great Crusade, now covers half the moon and produces everything from household goods to small spacecraft. The manufactorum is known across the Sector for the quality of its manufactured Avenger Strike Fighters—a weapon in high demand among Imperial Guard regiments.

As is typical of a hive world. Balzagor is ruled by a wealthy feudal aristocracy that dominates the politics of the world and lives in luxury in the upper levels of the hive cities. This elite social class is indifferent to the billions of workers who live in the poverty-stricken, often violent lower levels of the hives. With food and clean water scarce, living conditions are abysmal, and riots and savage gang warfare are endemic.

This socioeconomic reality has undermined the political stability of the world in recent years. Riots and savage gang warfare has left the Adeptus Arbites and Planetary Defense Force spread thin and exhausted by constant deployment to areas of unrest and violence. Perhaps more alarming, there are rumors spreading of a xeno presence—with reported sightings of the Tau water caste (diplomatic corps) walking freely among the workers and slaves of the underhive.

Reported sightings of xenos in the underhive are unconfirmed and must be met with considerable skepticism. Recent events on Medea III certainly require a heightened vigilance against Tau political intrigue, but as of yet, there is no compelling evidence that xenos have infiltrated Belzagor territory.

The planetary governor, Gregor Thule, and the rest of the corrupt aristocracy are fools at best; at worst, they are incompetent to the point of treason. Agents of the Ordos Xenos have confirmed that a contingent of the Tau water caste is operating in the underhives of Balzagor and working in concert with a growing rebel movement.

What’s more, given that the ruling class has allowed living conditions for the worker class to degenerate into near-anarchy, it will take only a spark to incite rebellion that could cost the Imperium this strategic manufacturing center. Every effort must be made to find and eliminate this xeno threat—and then focus on a restructuring of the local government.