Last fall, I used a CNC milling machine to cut out these wall panels from basswood sheets. I put the project aside, however, until recently.

TheGM: Back in February, I talked about the Mos Eisley Project—our plan to build a large and highly detailed desert city with a look inspired by the Star Wars movies.

As I noted back then, the Corvus Cluster isn’t starting a Star Wars campaign on Tatooine. It’s just that The Gaffer and I have a lot of desert terrain, and we’ve been playing some City of Death battles using a bunch of Middle Eastern buildings purchased from the Miniature Building Authority (MBA). 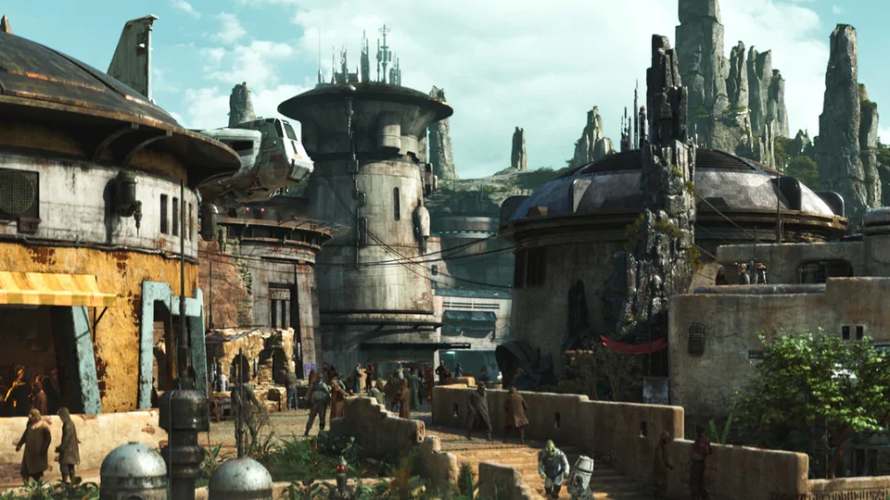 I’m using a lot of Star Wars-themed artwork to inspire my design for the Mos Eisley project. We’ll see how much detail I can squeeze into a 20-square-foot table by the December convention.

It occurred to us that, by adding a few 3D-printed sci-fi buildings and adding a few high-tech features to the roofs of our MBA buildings (antennae, air-conditioning units, radar dishes, etc.), we could very easily recreate the look of Mos Eisley on our game table. It would be cool.

Well, things got a bit interesting after that. I agreed to provide the Shorehammer 2022 convention in Ocean City, Md. (Dec. 1-4) with a diorama-quality game table  as a special “extra” for convention attendees.

Well, obviously the solution was to hit the accelerator on the Mos Eisley Project. Get the buildings done, and then build a dedicated table for them.

Pulling out those long-overlooked wall panels, I glued them together and used wood filler to hide any imperfections at the joints of the wood. I also added a layer of grout to the surface to create a stucco effect.

This is a big project, and it starts with a lot of small projects. For example, in September 2021, I wrote a blog about using my CNC milling machine to build a Mos Eisley-style house. Alas, I put that project aside, but the commitment to Shorehammer led me to put that unfinished building back on my workbench.

The first task was to glue the  wall panels together, cut out a roof from MDF board, and start thinking about details to add to make this building look as good as possible.

I used whatever I had on hand. Plastic rods were turned into piping on the back wall, corrugated Styrene sheets were used to represent steel rolling panels that cover wall openings used to access the high-tech parts of the house, a 3D-printed computer monitor was added to the front door, etc.

I couldn’t just paint the building. The walls are wood, and I’m not that great a painter. It would look like a painted wood building. Also, I wanted it to match my MBA buildings.

To prep the building for painting, I needed to give it a stucco or mud-covered look. I used wood filler to cover the seams where the wood panels join together, spread more filler randomly across the walls to give it a more irregular surface, and used a new technique to create a stucco finish.

As my first attempt using a CNC milling machine, I kept my first building design simple. But there are some nice architectural features that give it, I think, a “Star Wars” vibe.

This technique begins with coating the walls with Modge Podge, a commercial mix of PVC glue and a synthetic resin that acts as a glue but also dries into a hard protective shell for the model.

While the Modge Podge was still wet, I sprinkled a fine coating of grout (n powdery mix of extra-fine sand and cement) over the surface. The wet Modge Podge holds the grout power in place, but the grout rests on the surface and provides a texture that’s much more “to scale” than using playground sand.

After tall of this dried, I sprayed the building with a black primer and then used a dark green spray paint over that. (The hope is that the green will, when the final layer of spray paint in added, provide a little tint in places and prevent the building from looking so uniform in color.)

I didn’t want to go overboard on the details, as the building needs to blend in with my less-detailed commercial MBA buildings. Still, the pipes and the electrical cable on the wall add some flavor to a relatively simple building design.

The final paint  layer was added using The Army Painter‘s Skeleton Bone spray paint—a color that matches the walls of my MBA buildings.

That’s right, the entire building is painted with commercial spray paint cans. A paint brush was used only for the doors, the piping, and a bit of rust.

Now the building is almost done. I’m going to glue some fine cross-stitch, diamond-pattern aluminum mesh over the windows to create the traditional wooden latticework seen in older buildings in the Islamic world. But that’s an easy last step.

The Corvus Cluster mostly focuses on the “story” of our little corner of the galaxy. But I know terrain articles are popular, and I’m doing a lot of terrain right now. So, I’m going to try to chronicle the Mos Eisley Project in detail. I mean, it’s going to consume my time for rmonths.

So, you’ll soon see the following:

•  A quick look at how I’m trying to update my medieval/modern day MBA buildings so they fit into the 40K era. That’s mostly through adding high-tech details to the roofs.

• I’ve also got a handful of 3D-printed, Star Wars-themed buildings to paint. They’ll really add to the Star Wars look, and I’ve got a honking-big tower that I intend to use as an Adeptus Arbites precinct house. (When I’m done with precinct house, it will be a grim reminder to the citizenry of the totalitarian rule of the Imperium.)

• I need to come up with little diorama-style vignettes for the table: a crowded marketplace, a luxurious courtyard garden, etc. I hope to add a bit of whimsy to them. For example, I considered a junk heap behind a building with the top of a rusted Dalek peaking out—a little joke for the sharp eyed,)

We’ll see what I come up with. Stay tuned!