Panic spreads with fall of Barad Mine to orks 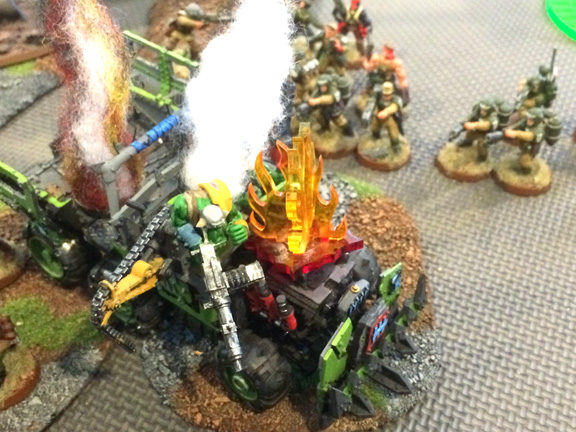 Three flamers and a plasma gun engulf this ork Trukk, incinerating the driver and gunner in holy promethium.

“They’re overrunning our position! Orks are swarming over our armored column, and they’ve broken through our lines! Major Stovall is dead. He was killed by the last strafing run of xeno bombers. This is Alpha Company signing off. They’ve reached our command post.” [Sound of gunfire, screams, and a bellowing ork before signal lost.]—Last communication with Barad Mine, 3 107 736.M41.

The Barad Mine, the most productive mining center on Hegira, was lost to xeno forces yesterday, a military disaster with grave implications for the Imperium’s hold of this loyal bastion of mankind.

The attack was launched from the newly fallen Tarak Mines and involved the largest ork military force yet seen on Hegira—nearly 30,000 orks. The xenos were met by the two battalions of the 728th Cadian Regiment, and five battalions of the 3rd Regiment of the Hegira PDF (planetary defense force). 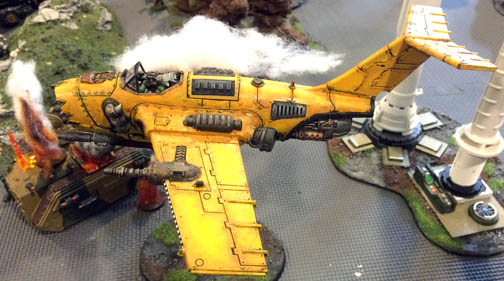 The Imperial force’s only defensive against ork aircraft was an Icarus lascannon. It managed to graze this Dakkajet and leave it with a smoking engine.

Hastily deployed defensive works were set up in front of the ork line of attack, and as the orks advanced, a spoiling attack was launched by the 2nd Grenadier Co. of the 728th and a squadron of Hellhound tanks.

The attack of the 2nd Grenadiers quickly stalled, as ork anti-armor fire immobilized their anti-personnel carriers, and then the grenadiers were strafed by ork aircraft.

The Hellhound squadron was more successful, meeting an advancing column of Trukks and smashing the vehicles with flaming promethium from their infernal cannons. The only survivor was a single vehicle, whose flaming chassis swerved through Imperial troops and disrupted the firing line. 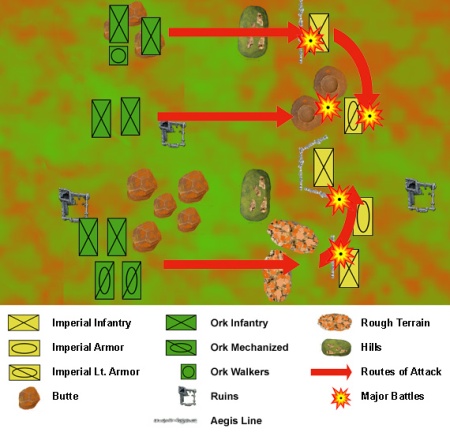 The earliest combat exchange between infantry occurred on the Imperial right flank, where a Deff Dread walker accompanied a huge mob of ork warriors. The warriors charged a reinforced company of PDF conscripts, while the ork walker stumbled and failed to keep up.

Despite defending an Aegis Line, and being accompanied by a lord commissar and priest, the conscripts panicked and fled—and were chased and run down by the frenzied ork mob. Not a single menber of the company survived. This slaughter alone cost Imperial forces nearly a quarter of their infantry assets.

On the opposite flank, the disorder caused by the burning Trukk smashing through Imperial lines was made worse long-range ork fire from the advancing ork line. Although the conscripts did not break, the  unit did give ground.

At this point, a squadron of Valkyrie gunships roared overhead and launched a massive volley of missiles into the xeno lines. Thousands of orks were vaporized in minutes, but with their numbers so great, the damage proved too inconsequential to stop the xeno attack.

A Valkyrie squadron strafed the ork lines repeatedly, causing massive casualties. Unfortunately, the numbers of ork warriors were greater than the firepower unleashed by Imperial forces.

At this point, squadrons of ork aircraft appeared over the battlefield, their suppa shootas annihilating Imperial troops by the hundreds.

The battle continued into the night, but the Imperial lines were thin and ready to shatter. The orks turned the Imperial right flank—and then the left flank. Based on voxcast accounts, the final stand occurred at the Imperial command post, which signaled the battle’s loss seconds before voxcast signals ceased to broadcast.

Military authorities estimate Imperial casualties at nearly 80 percent—all fatalities, including the death of Major Paulo Stovall, commander of the Barad Mine defenses.

TheGM: For the first two turns, I felt in total control of the battle—and then it all went downhill. I made several key mistakes. For one, I allowed myself to get to comfortable behind my Aegis Line. This defensive work, taken only because I needed an Icarus Cannon to deal with ork Dakkajets, caused me to sit behind my defenses on the right flank.

What I should have done—with a 30-man conscript unit backed by a lord commissar and priest—was to charge that ork unit that ran me down. With the priest’s Hymns of War ability, I could have had 60 melee attacks, and possibly a reroll of all misses. A melee with orks is tough, but when you’ve 80 attacks against 10 orks, you’ve got a chance. And I’ve got to break my natural tendency at conservatism (if not meekness) on the battlefield.

Ah well, yet another “learning experience.” I’m really getting tired of those. I’m beginning to think I should prepare for the Hergia campaign to end pretty soon.

The Corvus Cluster is a hobby blog that focuses on our club’s wargaming adventures in the Warhammer 40K universe.