The Fall of Count Feracci (Part 2) 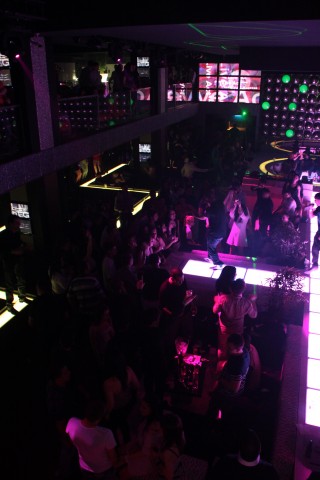 The dance floor at the House of Subtle Delights, as seen by Count Feracci as he waited in Forbin’s office.

“Ah, yes, well, that’s a long story,” Forbin said. “The lady is of a most unique bloodline … from outside the segmentum. But her past is irrelevant now. She needs a home suitable to her station, and I thought perhaps that the two of you might find common cause.”

Johaan’s eyes surveyed Adriana with both lust and cool detachment—callously gauging her worth without regard to her sense of dignity. Yet the girl simply watched him with the faintest smile on her lips. It was almost as if she were daring him to refuse her.

“You’ll forgive me, Forbin,” Johaan said with scorn dripping from his words. “But I can’t quite picture you engaging in altruistic work. How do you profit from such a matchup?”

“Oh, I have a small favor to ask in return for generously bringing you two together,” Forbin said.

Small as the moon of Baal, most likely, Johaan thought.

The art of bargaining was practically an inherited trait of the Feracci family, so Johaan knew the best strategy at this moment was simply to wait. Nothing prompted a man to talk as deafening sound of silence.

For a moment, the room was silent—then Forbin cleared his throat.

“What I mean is, I have found it profitable to help a number of customers move freely across the Sector without the notice of Imperial authorities,” Forbin said. “But that is increasingly difficult as the Arbiters have tightened travel protocols across the Sector.”

“However,” he continued, “it has come to my attention that crew members serving the noble trading houses receive a cursory look, as their arrival on new worlds is simply business as usual. Thus it would be so much simpler if my customers could sign up as crew members until they reach their destination. Then they will quietly resign and go their way.”

“And if the Arbiters do take notice of these crew members, won’t that bring my trading house under investigation?” Johaan asked. “What if these customers get into trouble once they leave my ship?”

“There is no reason to concern yourself with such matters,” Forbin insisted. “The documentation of these men and women will be legitimate. And if they break their association with the House of Feracci upon their arrival on a new world, what of it? They will break no laws in leaving your ship. And they have no intention of causing trouble upon their arrival. There is no reason why House Feracci would be troubled in any way by this arrangement.”

Johaan wasn’t convinced. But it was hard to concentrate. Adriana had sat down in a lush chair, and she slipped a delicate foot out of her shoe and gently slid her toes up and down Johaan’s calf. It was a crude attempt at seduction—but it also was proving damned effective.

It occurred to the nobleman that the woman was more than she appeared. She was too perfect, too alluring. He wondered if she’d sprayed herself with a genetically enhanced pheromone to accentuate his sexual attraction to her. Or perhaps she was genetically engineered to enhance her seductive qualities.

“I … I will have to think about this,” Johaan said, surprised at himself for his stutter. He angrily stepped away from the girl’s foot and glared at her. “That’s enough of that.”

Adriana again just smiled. Her eyes offered him a come-hither look that took his breath away. She suddenly stood up, and  although Johaan knew he should pull back—that he should put an end to her obvious attempts to manipulate him—he didn’t move as she put her lips to his.

The kiss seemed to go on forever. Johaan forgot that Forbin was watching them … that the girl was sticking her tongue into his mouth, rousing passions in him that harkened back to his first experiences with women. He was drowning in the kiss until she suddenly pulled back and returned to her chair, again with that infuriating but knowing smile on her lips.

Johaan came back to his senses. He flushed as he realized Forbin was watching him, had enjoyed his momentary surrender to the woman’s charms. It was obvious this sleazy criminal thought he had the nobleman outmaneuvered. Alas, Johaan thought, it was the truth.

“As I said,” Forbin noted wryly, “Adriana is a rare treasure.”

You win the first round, Johaan thought, realizing it would be impossible to reject such an exquisite prize. By the Emperor, the aristocracy would be abuzz the first time he appeared at a social event with Adriana on his arm.

Still, Johaan was convinced this was some sort of trap—that there was more to this arrangement than was clear right now. He would enjoy this most unusual woman but dig deeper into the mystery before him.

But it was time to give Forbin his due—and close the deal.

“You’ve played your game well, Forbin,” Johaan said. “But don’t gloat. And if you serve me false, you will regret it.”

Forbin shrugged. “That goes without saying, my lord. But there is nothing to gain by earning the enmity of the House Feracci. And your assistance with my customers will profit me well. Besides, it is satisfying to see Adriana find a home suitable to her extraordinary qualities.”

Potentially dangerous qualities, no doubt, Johaan thought. Still, the girl’s charms would be useful, softening up old nobleman whose influence could advance his business interests. Who know what doors she might open for him?

In any case, his decision was a foregone conclusion, he thought. There was no reason to drag out this charade. He stood up.

“We have an agreement,” Johaan said. “Adriana, let’s go.”

The woman rose but put a delicate hand on Johaan’s shoulder. “My lord, if you will indulge me. I must pack … and besides, you shouldn’t be seen leaving his disreputable establishment with me on your arm. You must leave alone, and I must leave unobserved. Then no one can spread ugly rumors about the origins of your new consort.”

She looked deep into his eyes. “Allow me to come to you … tonight.” Her voice dropped to a whisper. “All for you.”

Johaan knew there was more to her decision to remain behind, but he could not deny the logic of her argument, either. It would be a minor scandal if his consort were associated in any way with Forbin and his illicit business.

“Very well,” he said, turning to Forbin. “I’ll expect Adriana to be delivered to the Faracci Estate by midnight.”

“Of course, your lordship,” Forbin said, standing and offering a slight bow. “It will be as you wish.”

Finally, feeling that he was back in command of the situation—yet still ill at ease—Johaan turned, took Adriana’s hand, and offered it a kiss. “Until tonight,” he told her.

The woman simply smiled at him, her radiance drawing a smile in return from the handsome nobleman. He bowed slightly to her, turned, and strode out of the room—his posture suggesting a man pleased with himself.

Once the door had closed behind the clearly flustered nobleman, Forbin leaned back in his chair and chuckled heartily, a twinkle in his sunken eyes. He looked over at Adriana with a raised eyebrow.

“Well? I think our proud and arrogant nobleman is hooked. Work your magic, and he should be ours.”

Adriana opened her mouth, exposing a tongue that unfolded to an unnatural length, its tip curling past her delicate chin until it flicked about her ample bosom. For a brief moment, the women’s form appeared to waiver to an even more seductive if unearthly outline before her image steadied.

Her serpentine tongue slowly retreated back into her mouth and disappeared behind perfect white teeth.

She let out a delightful purr. “Count Feracci doesn’t know it yet, but he will prove a fine disciple of the Lord of Pleasure. It always starts with the first kiss.”

Read Part 1 of The Fall of Count Feracci.