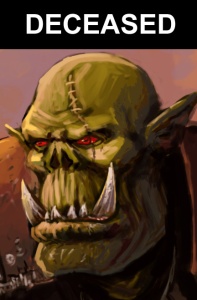 No record of this xeno’s early years exist, but Stompafist first became a concern to Imperial authorities in 727.M41 when Da Butcher attacked an orbital research facility in the outskirts of the Brimlock System. According to surviving security video from the facility, Stompafist himself led the boarding party that slaughtered the space station’s crew and research staff.

Over the next two years, Stompafist led Da Butcher on a reign of terror across the Corvus Cluster, attacking isolated worlds and commercial vessels. Unusually cunning for his species, Stompafist proved to be an excellent strategist and tactician, repeatedly eluding Imperial Navy patrols that desperately searched for him.

On one occasion, he even managed to launch a surprise attack on a Space Wolves strike cruiser and board it–although his orks were no match for the Space Marines aboard, who were able to defeat the ork boarding party and force Da Butcher to break off contact. 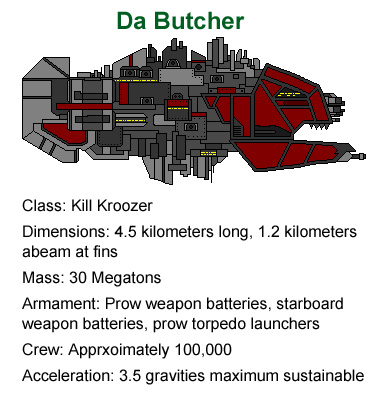 For several years, Stompafist disappeared from Imperial space, apparently attracted to a huge battle between two ork empires on the Eastern Fringe. Selling his services to the highest bidder, Stompafist fought alongside–or against–some of the most infamous ork Warlords and Freebooterz in the Ultima Segmentum. Among those include the infamous Freebooter, Kaptain Badrugg; the Arch-Arsonist, Warlord Snagrod; and the Great Rampager, Warlord Tyranika.

Stompafist eventually returned to piracy along Imperial space routes in 732.M41 and proved an elusive and baneful influence on commercial shipping lanes. Among the more notable incidents of his life:

MASSACRE OF THE TYRO RESEARCH STATION (727.M41)–The 500-member crew and research staff of this deep-space research facility were slaughtered by Stompafist’s crew. Captured on security video that survived the attack, the ork’s  brutal acts of violence and cruelty were so horrific that the video was classified as Vinatur In Aeternum (Banned Forever) and locked in the securest repositories of the Imperial Administratum on Belliose III.

BASHA AT BANKURA (M728.M41)–An ork invasion of the Imperial world of Bankura is defeated by the intervention of the Space Wolves Chapter. Stompafist stymies the initial attempt to reinforce Imperial forces on Bankura by smashing two naval cruisers, but the arrival of a Space Wolves Battle Barge shifts the balance of power and Stompafist withdraws. When asked why he was abandoning the battle, Stompafist insisted he wasn’t retreating: “The boyz are ave’n fun fight’n ‘umies on the planet. They don’t needz me anymore.”

GREAT SMASHA OF GASHNAK (731.M41)–Stompafist leads the naval forces of Warlord Snagrod as the Arch-Arsonist battles against Warlord Gashnak, who seeks to overthrow Snagrod’s rule of the Charadon Empire. Stompafist feigns defeat at the hands of Gashnak’s fleet, which gives chase and is ambushed as it pursues Stompafist’s Da Butcher past a nebula where 26 Kill Kroozers lie in wait. After his great victory–a “good smasha” of the enemy–Stompafist personally hands over a manacled Gashnak to Snagrod, who incinerates his rival by tossing him in a pit filled with promethium and tossing in an unlucky gretchin holding a burning stick.

BOARDING THE WOLFBORN (733.MR1)–Revealing a level of cunning seldom seen in an ork, Stompafist attaches Da Butcher to the hull of a large merchant ship and enters the Damasak System. Using human captives to send out the required Imperial registries to avoid suspicion, and with his ship screened by the merchant vessel’s bulk, Stompafist is unchallenged as he enters orbit around the bustling hive world of Damasak III.

Although his original intent was a raid, he quickly changes his plan upon discovering a Space Wolf strike cruiser, Wolfborn, in orbit. Stompafist is able to approach to within 1,000 kilometers of the Space Marine vessel before he is challenged and ordered to change course, whereupon Da Butcher fires its main engines, breaks free of the merchant ship, and rams the strike cruiser.

Ork boarding parties quickly enter the strike cruiser and slaughter sizable numbers of the human crew–but are soon assailed by enraged Space Wolves on board. Despite bitter opposition from the attacking orks, the Space Marines steadily advance and clear their vessel of the xeno threat. Recognizing that his own ship is at risk of boarding, Stompafist orders Da Butcher to break free and flees the system. The damaged Wolfborn is unable to follow.

VICTORY AND DEATH AT HEGIRA (735.M41)–Perhaps the greatest success of Stompafist is also, ironically, his doom. In a masterfully fought battle against an Imperial navy flotilla defending Hegira (a moon in the Sculptor System), Da Butcher destroys a Dictator-class cruiser, two Firestorm-class frigates, and three Cobra-class destroyers–obliterating half of all Imperial naval assets in the planetary system–and then launching an orbital assault on the planet. (See Imperial Navy suffers defeat at Hegira.)

Much like the ancient mythical figure, Admiral Nelson, Stompafist is struck down at the moment of triumph. Engaged against the Imperial cruiser, Blessed Ignorance, Da Butcher critically damages the Blessed Ignorance‘s engine room, leaving the ship at the ork vessel’s mercy.

At this moment of victory, however, the flotilla’s last surviving frigate, The Audacity, slips behind Da Butcher and fires a lance shot into the bridge of the ork vessel–and presumably kills Stompafist. (His death is later confirmed from the interception of subsequent ork communications between the ship and ork forces on Hegira.)

The death of Stompafist does not save the Blessed Ignorance or The Audacity, both of which are subsequently destroyed before the battle ends. Still, while Da Butcher remains a threat to Imperial forces, the threat of a cunning and dangerous xeno leader such as Stompafist does come to an end.

THEGM: The battle, Imperial Navy suffers disaster at Hegria, was a magnificent game to play, and as Stompafist swept the battlefield, I had hopes the campaign had a new and exciting (anti) hero–one that might even challenge Rumlar for the leadership of ork forces in the Sculptor System.

Alas, it was not to be. A lucky critical hit ended Stompafist’s illustrious career–but he will be remembered as a brief but shining light for those of us living in the darkness that is the 41st Millennium.

— Artwork courtesy of Diego Fonteriz. See his artwork at http://fonteart.deviantart.com/

Tagged as: Orks, People of Interest