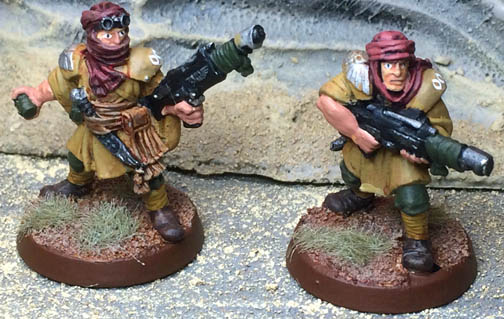 My new Tallarn–a rare e-Bay purchase–needed only a slight touch-up before they were ready for the tabletop.

There are so many boxes of 40K figures on my shelf that buying more seems irresponsible. But I’ve never known that logic to stop a fanatic hobbyist before, and it hasn’t stopped me. So when I had a hankering to buy some Tallarn warriors, I checked out the Games Workshop website—and then took a quick peek on e-Bay. 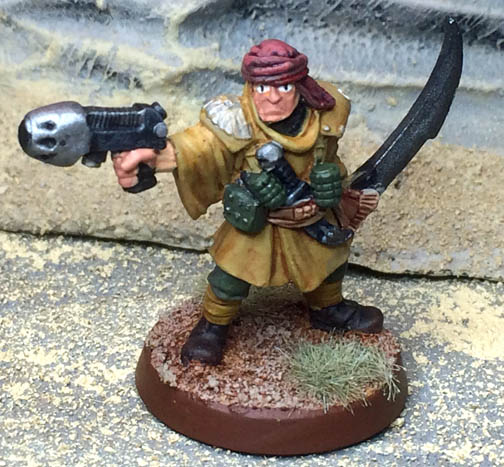 This dangerous-looking individual will serve as Col. Fakhri Pasha, commander of my 2nd Tallarn Regiment. But, in a pinch, he also could could serve as a sergeant, an officer, a bandit leader, or the chief of a nomad tribe–one of the merchant families that travel among the hive cities as traders on the world of Morkai.

Well, it turned out there were some nice-looking and painted Tallarn on e-Bay for sale at a good price, so I said, “Why not?” They arrived a week later, and they were in pretty good shape.

I did some touch-up work. The tunics and leggings were a bit worn, so I touched them up with Desert Sand. A little Catachan Green removed some scuff marks on the trousers, and although I couldn’t match the head turban exactly, I found that Bugman’s Glow worked as a highlight … and hid the shiny metal showing through in a few places.

All in all, it took about an hour to bring the figures up to tabletop standard—and then I added an Imperial Guard decal to the shoulder pad. The Tallarn are the 2nd Regiment (002). Not sure why GW has a 002 transfer, but it caught my eye, and I used it as a lark.

Since then, The Gaffer gave me eight old Tallarn of his, and at a recent convention flea market, I picked up another dozen plus an auto cannon and las cannon crew. All told, my new Tallarn Regiment will soon consist of a command squad, two 10-man squads, and two heavy weapons. Not a lot. But enough to give me themed troops for some of the smaller skirmish games I want to play on my desert world of Morkai

Or, in a pinch, I could use them as nomadic merchants plying the trade routs between hive cities on Morkai.

I’m thinking the Tallarn will be my mechanized force. I haven’t decided whether they’ll rush around in a Chimera or, for something different, a Taurox. Also might pick up some more Sentinels—it would be fun to use a different paint job on some vehicles. I’m getting tired of the traditional green-and-brown camouflage look.

Also thinking of some Tallarn Raiders. Probably won’t put them on horses. Maybe I’ll use Space Marine scout bikes—or  Cold One from GW’s fantasy range—or something really weird. I’ve been so focused on quantity, I haven’t had as much fun with creativity as I’d like. There are so many blogs where hobbyists are showing their creativity. I’d love to offer the hobby world that kind of inspiration. Maybe one day.

All and all, I’m quite happy with my e-Bay purchase. The figures needed a tiny bit of work, but the paint job was nice—and a little touch-up was nothing compared to the time of painting from scratch. If Rumlar’s orks ever get off Hegira and hit one of the desert moons, I’ll be ready.

The Corvus Cluster is a hobby blog that documents our adventures in the Warhammer 40K universe of Games Workshop.