Abnightus retreats to his shuttle, while his Skitarii sacrifice themselves to fend off the xeno attack.

Escaping to the shuttles proved more challenging than Drake imaged. The countryside was dotted with ancient obelisks, approximately 10 to 12 meters tall. Originally dismissed as nothing more than simple stone pillars, they proved anything but—as Drake began to run toward his shuttle, he could see the obelisks were glowing, and skeletal figures were stepping out of the light.

Already, his path was blocked by two xenos, and he and Marbray each took one down with quick shots of their laspistols. To his right, Drake saw Abnightus surrounded by a shimmering force field, which was lit brightly as it struggled to repulse multiple shots from one of the insectoid-appearing xenos. Two Skitarii quickly shot the xeno horror down.

Trusting the Tech Priest to take of himself, Drake focused on his own survival. In the distance, he could see his personal shuttle, The Buccaneer, under attack from approaching xenos. Hiding behind stacked piles of supplies, several of his crewmen and two Mechanicus servitors were firing back.

As Drake ran, he saw that the defenders were able to neturalize the xenos as quickly as they appeared out of a nearby obelisk. But then one of the ghostly wraiths rose up through the ground and swiped its whip-like appendage at a servitor bearing a heavy bolter, ripping the cyborg in half.

With the xeno wraith inside the camp, the crewmen began to panic—until the shuttle pilot activated the heavy bolter on the shuttle’s hull and let loose a volley that tore the wraith apart. At that point, Drake arrived and bellowed orders to return fire on the advancing xenos, and a volley quickly drove the advancing xenos back.

The scene was a horror. In addition the dead on the ground, a growing number of xenos were pressing their advance, and green energy beans swept through the camp. In the distance, shuttles were beginning to take off, their engines roaring thunderously as they rose to billows of smoke and flame.

But even rising off the ground offered no guarantee of safety. Green lances of energy also were targeting the shuttles as they rose, and as one beam struck a shuttle, it was quickly engulfed in a fireball, sending fiery debris outward in smoky contrails. 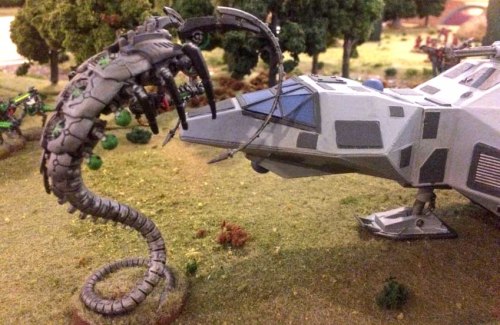 A Necron wraith attacks The Buccaneer–only to be cut down by the shuttle’s hull-mounted heavy bolter.

It took only a moment more for Drake to reach his shuttle, with Abnightus not far behind. As Drake boarded and turned, he could see that the Tech Priest was accompanied by only two Skitarii—the rest of his 40-plus entourage apparently dead. Herding everyone aboard, Drake slammed shut the hatch in relief and ordered the shuttle upward.

The Buccaneer was struck twice by xeno fire as it rose off the blighted planet and made its way into orbit. The shuttle shook hard with each blow, and Drake’s stomach churned as the pilot desperately shifted his trajectory to evade the increasingly intense surface-to-air fire.

Kept abreast of the tactical situation by vox-cast, it became clear that The Atropos also was coming under fire from powerful surface-to-orbit weaponry, and Drake ordered his beloved ship to break orbit. The shuttles would have to catch up as best they could.

Thankfully, once The Atropos broke orbit—and the shuttles followed—the xeno fire stopped. During the five-hour ride to catch up with the main ship, Abnightus said nothing, but as their shuttle finally reached the docking of of Drake’s massive ship, Abnightus finally spoke:

“All sensors on the planet have ceased broadcasting. Available data, however, indicates of the presence of 5,839 xeno warriors on the surface. Surface-to-air fire suggests 30 major defensive weapon systems now functional.”

“Preliminary analysis is definitive: It will be impossible to return to the surface without a significant military force. This expedition is concluded. A return to Belliose III is required.”

That was fine with Drake. Even before the shuttle entered the docking bay, the order was given to head out of the system. Once aboard, Abnightus strode to his assigned quarters—and was not seen again for the entire weeks-long journey back to civilization. As soon as The Atropos reached orbit around Belliose III, the Tech Priest boarded a shuttle and left—without another word to Drake.

But Drake wasn’t worried. As soon as The Atropos had reached orbit, a coded vox-cast from the planet indicated that Abnightus had made payment in full. Although three shuttles—with all hands—were lost during the hasty evacuation of Stigmata, and six shuttles were damaged, the business arrangement was highly profitable for the Rogue Trader.

For all that, Drake was unsettled by the adventure. He could not shake the memory of the xenos they’d encountered. Perhaps it was his imagination, but there had seemed a blazing hatred in the eyes of the seemingly mechanical creatures.

Perhaps more unsettling was that Imperial authorities were unaware of this newly awakened threat. After all, Drake could hardly report the incident without risking immediate arrest and execution for violating the Imperial quarantine.

But then he had a thought: If the Imperium didn’t know Stigmata’s secrets, why had they quarantined the planet?

TheGM: There is an old adage in wargaming. Beware the young player. When I hosted this battle at the FALL IN! convention in November 2015, only one player—a fellow of 11 or so—showed up. An avid 40K player, he eagerly accepted command of both the forces of Drake and Abnightus.

His knowledge of the rules was encyclopedic, and after a turn, I surrendered the duties of GM to him and contended myself with pulling Necrons out of my carrying case and putting them on the table for the youngster to blast.

Afterward, he offered to get his 40K troops and play a traditional game. On one hand, I was tempted to face this fearsome opponent “mano o mano.” On the other hand, I’m heading into senior citizen territory, and as it was nearly 9 p.m., I regretfully declined his challenge.

Just as well. Despite his cheerfulness, his tactical prowess reminded me of Ursarkar Creed. And his dice rolling …. well, as they say, beware of children across the game table. The dice gods are biased in their favor.

Click here to read the beginning of this battle.