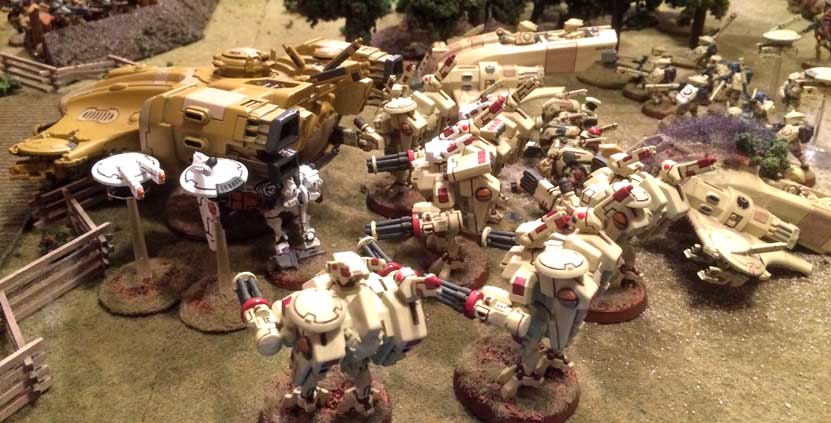 The tip of the Tau attack punches into the Imperial line near the farm fence once held by the Skitarri.

“Enemy troops have penetrated the Imperial line and are turning the flank. All units are ordered to fall back into the city.”–Orders issued at 04:00 by Capt. Delmara Stryker (later summarily executed by the regimental commissar for his failure to hold the city of Malati).

It is clear that the Imperial line had been shattered, and a counterattack was ordered. Screaming defiance, a veteran company of Guardsmen charged the Tau vanguard.

Flamethrowers bathed the xeno Crisis Suits, including Swiftstrike, with the cleansing fire of prometheum, and shotguns were emptied at ranges of only meters. One Crisis Suit was immersed in flames and collapsed, and the Tau commander’s shield drone was destroyed. The Tau commander suddenly felt his vulnerability.

As a Lemon Russ tank took position by the communications array, it lined up a hasty shot that was fortuitous: The last of the Tau piranhas spinned out of control and crashed in a ball of flame.

On the far flank, the Sentinel traded fire with the Tau heavy guns, its auto cannon rounds bouncing harmlessly off the Hammerheads’ armor. Meanwhile, the advancing mechanized troops advanced up the highway to strike at the Tau guns.

For the last few hours, the Kroot and Tau in the rear had contented themselves with long-range fire—there had been no room for them to advance. But, as the xenos poured over the Imperial defenses, there were no more targets, it was time to go forward and support the vanguard!

The vanguard had targets everywhere. Stealth Suits leapt over the Imperial entrenchments and amongst the Guardsmen in their trench lines. Their burst cannon slaughtered all who cannot scramble over the trench walls and escape.

Commander Swiftstrike and his team continued to pummel the Exterminator tanks, but despite repeated strikes, the trice-blessed machine spirits of the vehicles refused to succumb to the xeno fire. The second Crisis Team took on the veteran Imperial Guard and has more luck, wiping them out to a man with their burst cannons.

On the far flank, the Sentinels and Tau Broadsides continued to trade fire to no avail.

The main Imperial line was crumbling rapidly. The final reserve moved up to encircle the communications array in a determined, last-ditch attempt to stem the xeno tide and hold the Imperial objective should the battle continue another turn.

On the far flank, the mechanized infantry reached the Tau line and disembarked from their Chimeras, letting loose a volley that killed several Tau warriors defending the xeno guns.

For the Tau, the continued fighting is almost sickening—a slaughter. As Sentinel Suits and Crisis Suits tore ragged holes in the Imperial lines, the mechanized fire warriors aboard Devil Fish finally disembarked to administer the “Mont’ki,” the killing blow.

And they did so. Firing their pulse rifles, they slaughtered the remaining mortar teams and then charged the Exterminators with photon grenades. The tanks were surrounded by powerful arcs of energy that disabled them, stunning what the Tech Priests call the tanks’ “machine spirits.”

On the far flank, the Tau and recently arrived Kroot reinforcements struck back at the Imperial mechanized troops and wiped them out. The Sentinel Platoon providing long-range support also was driven back by sustained Hammerhead and Broadsuit fire.

The port city of Malati burns in the night as xeno forces take control.

The Tau defeat was total. With the Imperial line breached, and casualties at high levels, there were no reserves to stem the tide. What’s more, xeno counter-electronic warfare interfered with Imperial voxcasts, making it impossible to shift troops to a fall-back defensive position.

What followed was a disorganized withdrawal that quickly turned into a rout. While many Guardsmen made it to the ships at port, significant numbers of artillery, tanks, and supplies were left behind. Some were destroyed by officers; others were simply abandoned.

Nearly 80 percent of regular Guardsmen were rescued, but approximately half of PDF forces were left to fend for themselves, as commissars of the 728th ordered volleys of lasgun fire to stop both the PDF and civilians from boarding ships set aside for the regiment.

Civilian casualties are unknown. It is known that Kroot auxiliary troops were responsible for the deaths of hundreds of civilians, although some witnesses report Tau officers risking their lives to hold back their excited allies from descending upon captured troops.

TheGM: The battle was not as close as the victory points suggest. By battle’s end, the Tau were only one turn away from seizing the Imperial major objective and wiping out the remaining Imperial Guard. If the game had only gone one more turn …

The Tau were helped greatly by the significant amount of terrain that was rolled up for the battle, as well as by the order of deployment. Although the Imperial commander rightly guessed the direction of the Tau attack, he still had to be prepared for a late flanking maneuver. The Tau were able to concentrated nearly all their units on the point of attack.

Once the battle began, the jauggernaut began. Imperial fire was mediocre, allowing an almost untouched Tau force to bear down on a handful of units. They were slaughtered quickly, and the Tau momentum could not be stopped.

I switched sides halfway through the game, as the Imperial players weren’t available for the second half of the game—and I made a silly mistake. When the Imperial mechanized squad went in to attack the Tau heavy guns, it should have hid behind the Chimera. If it had survived, the Imperial force would have earned a victory point for being in the Tau deployment area—and it would have been a tie in victory points.

At that point, despite the overwhelming Tau success in every other way,  it could have been argued that the Imperial Guard had held out long enough for reserves to stop the Tau.

But that was my mistake. And thus it was decided that Malati could not be held–and a mini-Dunkirk occurred.

Click here to return to Part 2 of the battle.

Click here to return to Part 1 of the battle.