NEWS FLASH – A PDF patrol on Hegira has clashed with an ork warband on a small island on the Byrgius Sea—the only significant water body on the fourth moon of Sculptor II.

Only a few dozen troops were involved, but military authorities expressed concern that this ork presence was the most northern intrusion yet by the xenos that have desecreated much of Hegira’s southern continent.

According to PDF General Tiberius Vectrix, two PDF squads, supported by an armored Sentinel, were on patrol when they encountered the xenos in a small port village evacuated last summer—after ork vessels were spotted cruising the southern coast of the Byrgius Sea.

True to their nature, the orks immediately charged upon spotting the PDF patrol, Vectrix said. The PDF responded with disciplined volleys that drove the orks into retreat.

No further information about the battle has yet been released.

MISSION: Kill the other guy 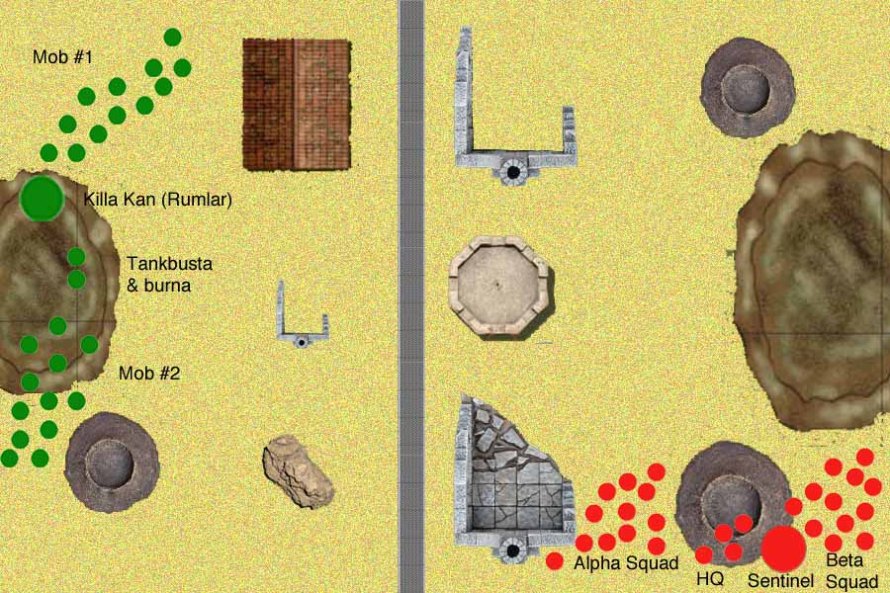 The ork Nob, “Kaptin” Rumlar, won the initiative and ordered his forces forward. “Get ’em boys!” was the extent of his tactical decision making for this battle. Every ork surged forward in the direction of the PDF. There was no thought of firing or seeking cover—just a head-long charge to get to the “humies” and start bashing heads.

The PDF were no more deliberate at this point, as Lt. Calius was aware he desperately needed his men in a position where they could fire to maximum effect. Alpha Squad ran to the nearby building to their left, looking to use the cover while setting up a firing line on both floors of the building.

Beta Squad ran forward to a position between the buildings where they could deploy into a firing line and target enemy troops to the west or north. Lt. Calius, Commissar Drake, with the rest of the command squad, and the Sentinel, moved to take up a positions to cover the “hinge” that would soon formed between the two squads.

The orks continued forward at a run, although as they came into firing range, Mob #1 made a half-hearted effort to take advantage of whatever cover was available. Rumlar’s Killa Kan stomped into a small building across the street from the Imperial forces.

Alpha Squad finally completed its deployment into the building and managed to fire a few lasgun rounds at the enemy.  No harm was done to the xenos. Beta Squad continued to run forward to its position. 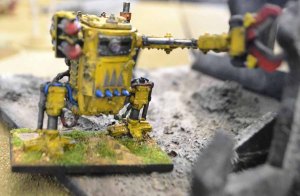 ‘Kapitan’ Rumlar in his Killa Kan takes a shot at the PDF line. (Yes we know that a nob cannot fit into one…)

Mob #1 continued its advance forward, while Rumlar’s Killa Kan fired a missile at the ‘humie’ Sentinel. The shot went wide. Mob #2 rushed forward and took advantage of the cover of a rock outcropping. They were starting to howl with ever-greater enthusiasm, as they sensed that the next  turn would bring them into charge range.

Finally in position, Alpha Squad let loose a volley at the orks. Having moved some final troops into position, their fire was ragged, and only one ork was killed. Beta Squad managed to get most of its troops in a scattered line, but only a few troopers had a clear line of sight. Their shots proved ineffective.

As the orks were getting close, it was clear the PDF were in a bad tactical situation. Perhaps they should have huddled in the corner and maximized their turns of fire? It was too late now. 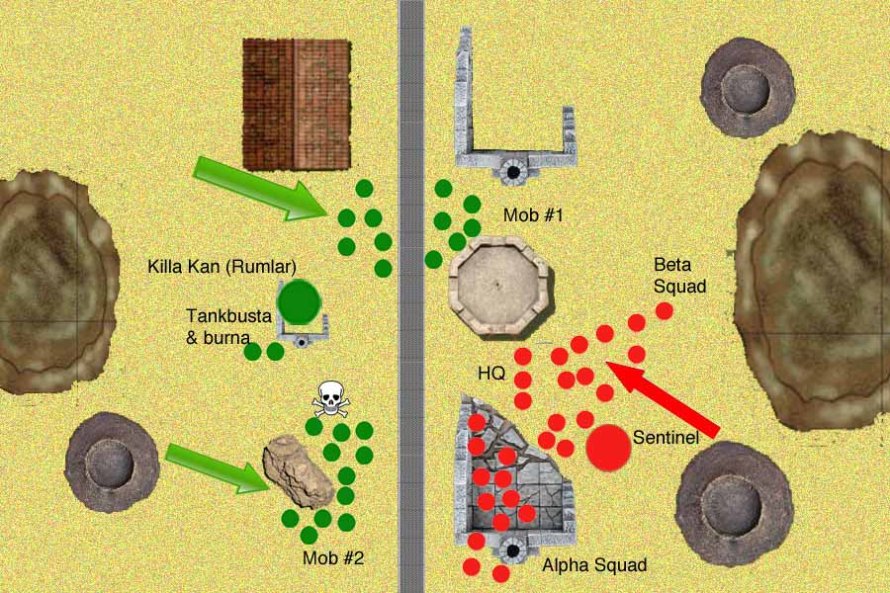 To the north, Mob #1 closes to within spitting distance of the increasingly nervous troops of Beta Squad. Lt. Calius, realizing the difficult tactical situation he was in—and increasingly nervous at the proximity of the xeno threat—orders his men to retire … at a run. There is no fire this turn. .  Commissar Dracos is disgusted but decides that, at this critical moment, nothing will be gained by the summary execution of the officer.

Rumlar’s Killa Kan fired at the Sentinel and missed again. The Sentinel fires at Rumlar and penetrates! Alas, the Killa Kan’s power shears are  destroyed but its missile rack remains intact. Still, the Kan takes a hull point loss. The tankbusta fires a missile and it goes wide.

To the south, Mob #2 charges into contact with Alpha Squad. The squad commander gives the order: First rank, FIRE! Second rank, FIRE! and a blistering volley devastates the ork line. Only three orks survive, but they pass their morale and charge into melee. One more ork is killed, but two PDF soldiers are chopped down.

Mob #2 is vastly outnumbered in the building with Alpha Squad, but cover saves aside, the orks lose no warriors, while the PDF lose four. That’s enough to force a morale check, which Alpha Squad promptly fails. It falls back.

Rumlar launches a missile and strikes a glancing hit against the Sentinel, costing it a hull point.

Mob #1 finally closes in on Beta Squad. Lt. Calius orders First rank, FIRE! Second rank, FIRE! but fails his leadership roll. Disaster! A ragged volley only kills two orks, and the two lines meet in a vast melee. At this point, the novice players make a big mistake, failing to realize how many attacks the Ork Boyz should have. Thus the ork melee round is unimpressive. Two orks and three PDF troopers are killed. 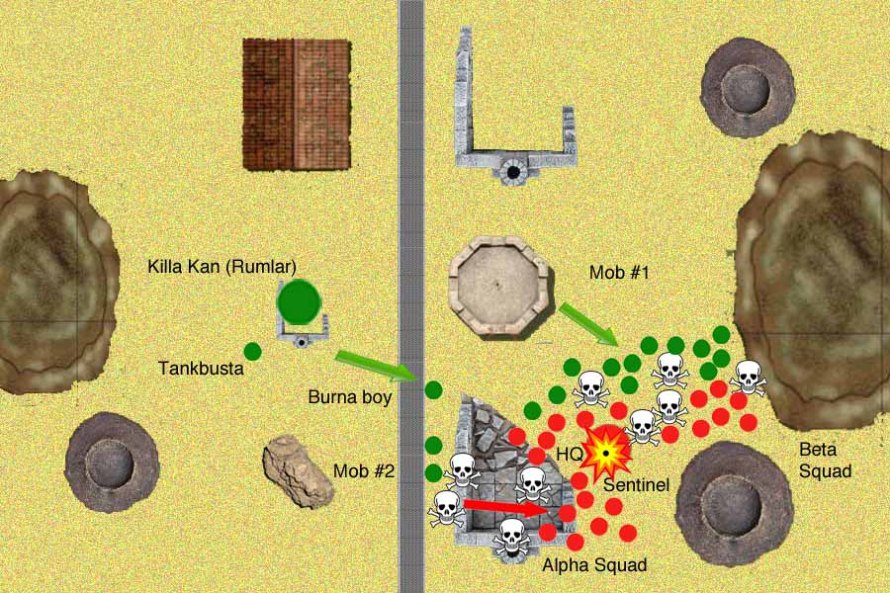 Mob #1 gives chase to the fleeing Alpha Squad and runs them down, ripping arms and legs off the troopers and leaving not a man standing.

The tankbusta ork fires a missile but misses. The burna boyz run up. Rumlar fires again but misses. The Sentinel fires and hits another glancing blow, sufficient to put Rumlar out of action.

To the north, the PDF put up a grand fight, losing two men but taking down two orks. Again, the players fail to give the orks their due in melee.

Mob #1 and Beta Squad continue to fight it out: the humans losing three men; the orks none. With Alpha Squad destroyed, the HQ command squad challenges Mob #2 and kills one ork.

The Sentinel turns to face Mob #2, as well, but the field is a swirling melee, and the walker cannot move or fire. The burna boy, however, has moved into position with his flamer.

The burna boy fires a shot at the Sentinel and causes a hull point of damage. The walker lists sideways and collapses into a pyre of flame. Two more PDF troopers and three orks. die

Both players recognize that they’ve made major mistakes in their outing and realize there’s no way to come to a fair conclusion to the battle. So they chalk it up to great fun and decide that both sides are so exhausted that the fighters begin to step back from the carnage and call it a day. There are a few parting shots, but the “armies” withdraw and leave the battlefield to the dead.

RESULT: Tactical draw, but, as far as the campaign goes, it can still be called a strategic victory for the orks as they are not driven from the island..

FromtheGM: As already noted, the orks didn’t appear to be particularly deadly in this battle, as both players were playing 40K for the first time ever. But the melee potential of the orks—and the potential of First Rank, FIRE! Second Rank, FIRE!—were the two big lessons learned.  Clearly, if the rules had been recognized earlier, the humans would have been crushed handily. But in the early stages of any war, warriors and generals often make big mistakes. So the result determined by the players stands.

The PDF commander was too hesitant. By failing to move forward and deploy with the best possible firing arcs, the superior firepower of the platoon was compromised–thus allowing the xenos the advantage of closing into melee.

While a tactical draw, the failure to oust the orks from Veris Island must be viewed as a strategic defeat. It is imperative that a larger PDF force be deployed to the island–and the xeno presence eradicated. Failure to do so will allow the orks to prepare the island  as a staging area for an invasion of the northern continent. Port Hinga must be assumed a Priority 1 target and the city’s entrenchment efforts will now proceed around the clock.