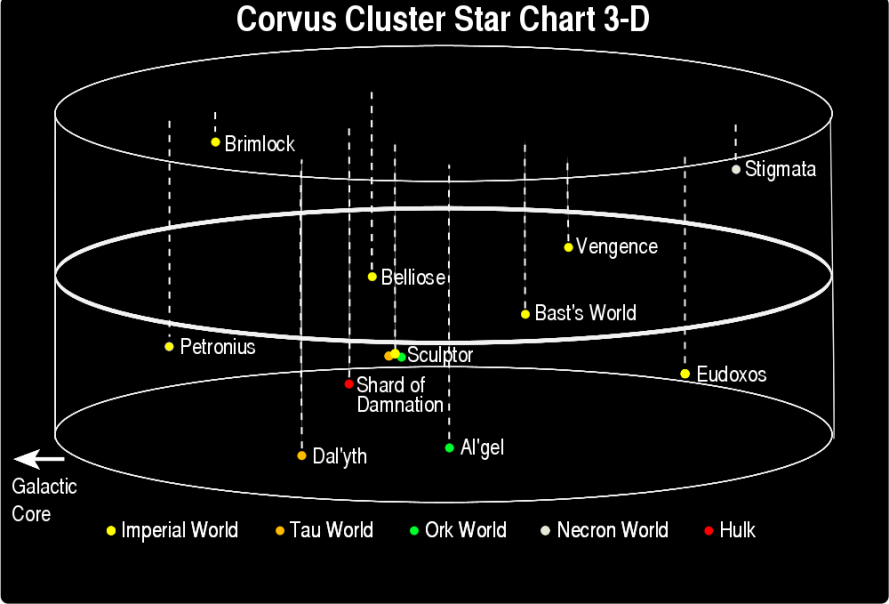 The two-dimensional campaign map (see below) is perfectly acceptable for visualizing the geography of the Corvus Cluster. But it is somewhat misleading. For example, the Brimlock and Petronuis systems appear practically neighbors on the campaign map, yet if you consider their “vertical” positioning—their position in relationship to the galactic plane, they are actually much farther apart. (See chart above.)

To help clarify the vertical distances among worlds, I’ve designed this three-dimensional star char. Hopefully it clarifies the vertical differentiation among the known star systems of the region.

If you notice nearby Petronius, it’s dashed line on the top ring is very close to that of Brimlock. But if you follow the dashed line down the vertical plane, you’ll see the system is actually “below” the middle ring. In actuality, the distance between Brimlock and Petronius is greater once the vertical distance is taken into account.

At the same time,  Belliose appears to be located in the middle of the horizontal plane of this region of the galaxy (where its dashed line intersects the top ring). Following the dashed line to the system, however, makes clear Belliose also is located near the center of the vertical plane, as well. (There’s a reason it’s the site of a major naval base.)

An important caveat: Neither of these campaign maps claims to provide a detailed geography of the entire Corvus Cluster. Taking a page out of Games Workshop’s thinking, it’s best not to lock down all the details of a fictional universe. This gives you flexibility to tweak things. Additional worlds are likely to appear. It might be nice if their location isn’t specified, so that—if events warrant—there’s some flexibility for the campaign to determine where a new world actually is.

Thus, for example, the location of Helios—and the nearby asteroid home base of the Knights of Altair—is not disclosed. They are, after all, a closely held secret of the Imperium, and there’s no reason to lock things down right now. Who knows? Maybe the Tyranids will show up at some point, and if that happens, do we want Helios in the xenos’ path? Or will it be better to keep it out of harm’s way?

Only time will tell.

But I hope the 3-D chart is of some use to visitors who are trying to make sense of our rapidly growing and increasingly complex corner of the 40K universe.

The Corvus Cluster is a Warhammer 40K blog of our adventures in the fantastical sci-fi universe of Games Workshop.